Many athletes think they are fast, but are they NFL fast? The 40-yard dash measures pure athleticism. Fractions of seconds separate first-round talent from the undrafted.

The 40-yard dash is the most popular event at the NFL Combine each spring. When grown men are chasing you down, hell-bent on hitting their tackles bonus, only speed will save you. How fast can you accelerate from a dead stop to full speed? Pro scouts look at all parts of the 40, from the acceleration in the first 10 yards to the photo finish.

The stopwatch identifies likely touchdown-scoring millionaires. It makes others re-think post-collegiate job offers back home in Georgia, the family business in California, perhaps law school for that Ivy League QB who thought he had a shot at the shield.

I look at it as another tool. It is the Holy Land of pure athleticism.


8 Training Exercises For The 40-Yard Dash

See video above for exercise demonstrations 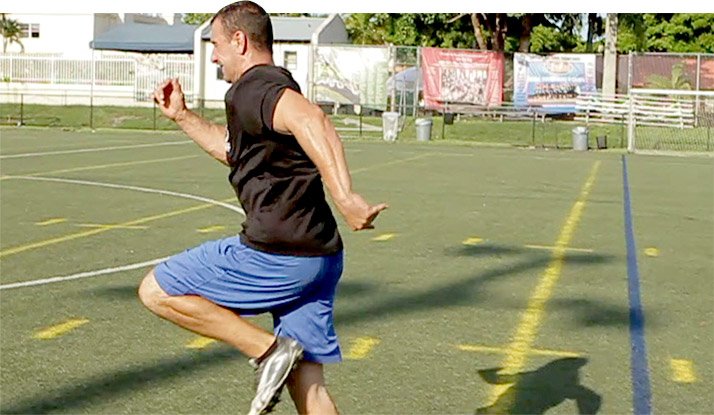 "Eventually gravity dictates that your body has to stand up. When you do that, you might not actually be traveling at your true, absolute speed potential, but your leg is now going through a cyclical action, not a piston action. We call that 'absolute speed mechanics'."

"If you're looking at the absolute speed mechanic, or that cyclical pattern, the Ankling-to-Butt Kick series is the first progression to competently teach that type of leg motion." 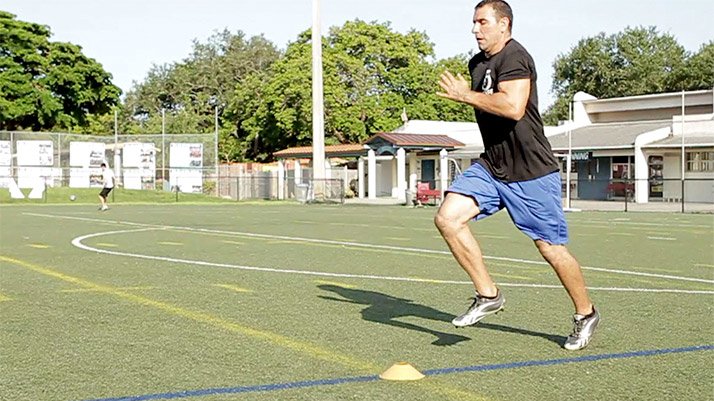 The next progression is the A-Run. Ankling initiates that recovery phase that happens as soon as your foot comes off the ground in that cyclical pattern. You want to reduce that time as much as possible in order to get quickly into your recovery phase.

The A-Run not only completes the cycle, but after you transition to the top, it gets into a ground preparation phase.

We're training Ankling/Butt Kick, coming back around to that cyclical pattern of the leg action, into that A-Run. 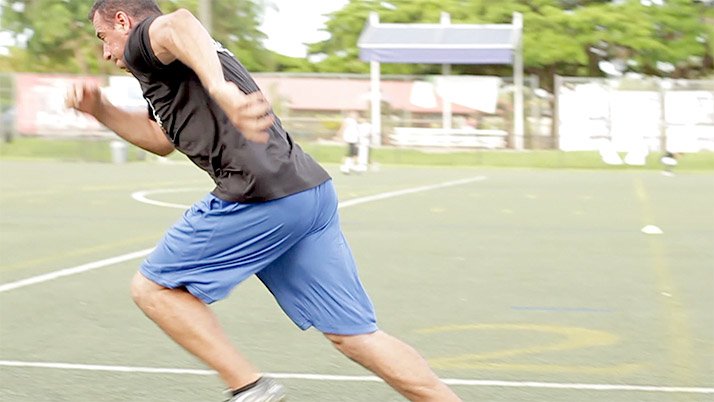 The Moving Claw Series is the best ground preparation phase that ties it all together. Your leg can actually travel through the air at almost an identical speed of when you're running at that absolute speed mechanically, from the 20-to-40-yard line.

You're not joint loading and moving fast-forward, you're just undergoing the properties of that powerful leg whip around the cycle of what happens when your foot comes off the ground until your foot comes into the ground.

When you start to master the complexities of the moving claw series ... we start to see the transfer of athletes starting to run like their body is intended to run through the all-important finishing point of the 40. 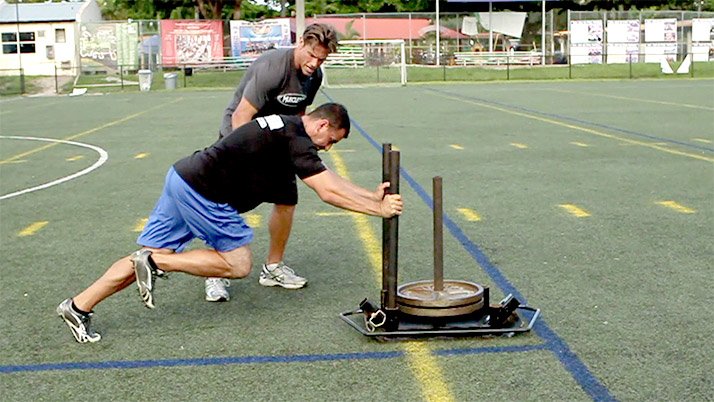 Pure acceleration is the goal. As soon as you come off the line, your body is in that forward lean, with your legs moving through that piston-like action.

People always talk about form running and joint angles, but let's just talk about strength. The stronger you are, the more force you have that's able to be applied into the ground, the faster you're going to move.

Not only will you get stronger in the prowler series, enabling you to get that piston-like action, but if you look at the angle of the ankle joint, that is the rate-limiting factor in terms of rate-of-force development.

If your rate-of-force development can be enhanced, you're going to be faster and more powerful through the acceleration phase. 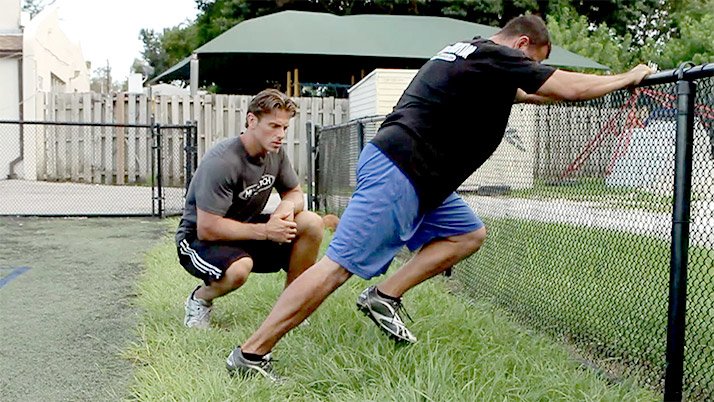 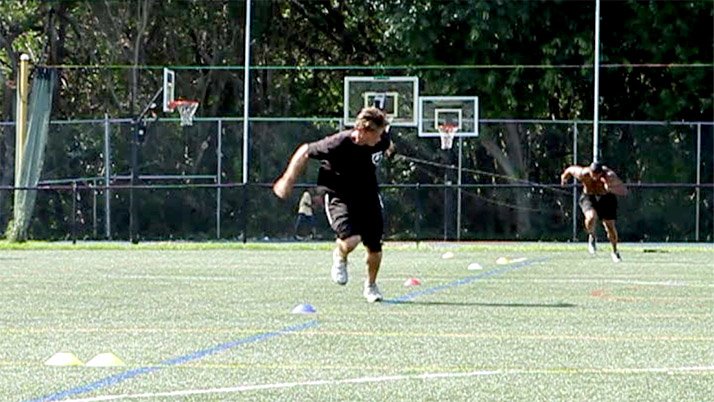 This is the most controversial topic in the industry. A lot of people shy away from it, because it's dangerous. A lot of people limit it because they're talking about research and force application.

I base my whole program around it. I think it is the most dangerous thing you can do, but I also think it can be the most effective.

It has to be a constant assistance, which is why you we use a pulley system as opposed to a bungee system.

It can only assist you in very minute levels above your maximum ability to run. On average you'll only see 3-7 percent assisted faster. The people who go against it talk about over-striding. Yes, over-striding could happen with this device if you don't micro-progress into it.

When I say that I mean the Moving Claw series, again, is the exercise. If you can master that and complex it back and forth between the actual assisted running itself, then you can be effective.

Once you've done the over-speed running, you have to do a lot of neuro-muscular work right after it, as well as get back into those moving claw series, and so on. I like to "complex" back and forth.

It's the most effective horizontal plyometric you can possibly do because of the rapid-stretch reflex occurring in the posterior chain. Not only do we do it with our combine athletes, we do it with all our veterans. I think we understand how to teach that speed. 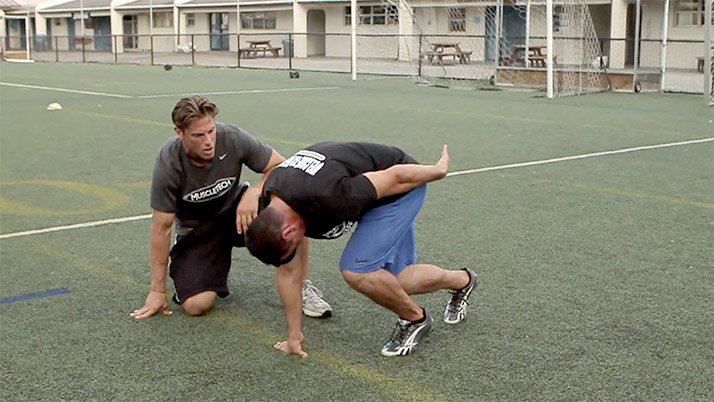 It is trying to get you into position to ...

Step-By-Step: Lower Half of Body

You have to load the front knee with the shin angle as low to the ground as possible to try to mimic that same type of drive shin angle when you come out. It's got to be a 2-foot jump, which is why you see us load the back foot without straightening the knee.

Step-By-Step: Upper Half of Body

I believe the arm up serves as a powerful lever forward, which is why we straighten the arm, so once the down-action of that arm comes down, you can actually come out. You flip the arm up to almost block the sun out of your eyes. When you flip and rotate your hand, it can act as a powerful stretch-reflex lever to propel your upper body into proper position.

It's an aggressive technique. The hardest part is after you get the powerful jump. Can you accelerate out? It's very difficult to teach to a football player because they don't have that track background. I think with assisted running complex, with this technique, it can be very effective. If you really want o maximize your gains, doing those two things will achieve it. 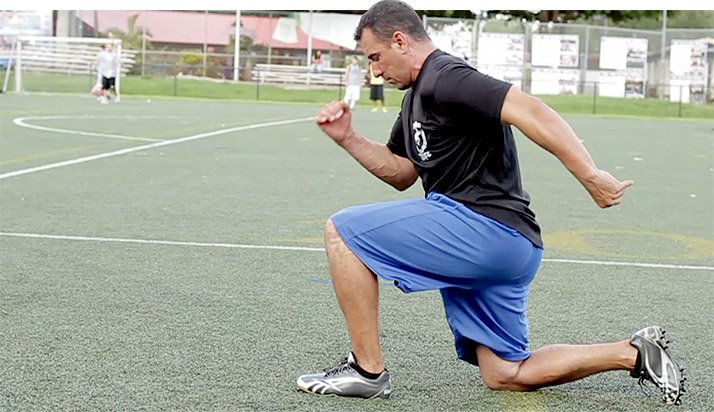 If you have good arm action, it might help propel your legs (which might be in a fatigue-state) into proper mechanics.

It tells us pure athleticism in a linear sense. People who say "the 40-yard dash isn't very specific," "you're not changing directions," "in football you never run a straight line" ... that's all ridiculous to me.

It's pure athleticism. When you look at the components of accelerating and transitioning and you look at the muscle action that is involved in the cyclical action of that finish, you're looking at the explosive reflex properties of those muscles.

Why can't they just look at my game film?

How are you supposed to gauge someone's true speed if they're always playing hurt on tape? You want to take that measuring tool of athleticism and if you can display that in addition to solid game tape, you just enhance your draft stock.

If you look at all the exercises we've performed at Bommarito Performance that are displayed in this football training series, we're not leaving anything out. That's the main thing.

You're looking at start, first step, acceleration, transition, finish, arm action, head position, everything. There are so many different variables in terms of that 40 yards that could go wrong, you want to make sure you have competent training drills to be able to enhance each and every variable. That's what we've done with the exercises we've provided.

Incorporate these exercises into your program to maximize your performance in the 40. Check out the entire series on bodybuilding.com.