NFL scouts love speed. Recent speed increases have changed the way football is played. Get with the times, blaze through the 3-cone drill and finish ahead of the rest.

NFL players must react to hundreds of stimuli during a single play. Your reaction time, your rapid change of direction determines whether you make a play or your opponent does. Beat him to that angle. Get to your spot with these exercises.

The 3-cone drill begins with a solid linear start position (3-point stance), identical to the 40-yard dash start. It's a power bounding drill because the distance is short (five yards in a direction).

After that, it becomes a speed motion because you work on circular speed (running speed along an arc), which is very specific to a number of athletes, especially in football, where good angles determine the success of any given play.


Examples of circular speed in games

Circular cuts are vital in football. There's no better way to demonstrate your ability to navigate those turns than to put a 5-yard radius on the turn itself. Some NFL scouts think the 3-cone technique is the most important skill at the combine. It has everything you need: straight line and linear power, circular multi-directional speed and braking.

The overall reps and volume of a 3-cone drill is minimal. Bommarito Performance Systems might focus on linear speed (power potential in a straight line) for 3- or-4 days per week. Sometimes BPS throws in a good 10-15 minute block of 3-cone drills at the end of every session, but it doesn't strictly focus on it often.

You bound, not run, out of the starting position. It's a 3-step bound, similar to a triple jump in track and field. Jump out of the start, bound, and then use a bound hitch step stop to cover five yards.

If your legs aren't long enough to jump into the perfect three steps (most aren't) there will be a slight hitch step on the left leg (the inside leg) before the third step comes down (right leg) into the cut before the hand touches the ground.

When you come back, it's the same 3-step technique. You literally try to throw your legs up and out as high as you can to gain distance on every step. It becomes a power bound (not a run) that covers 15 total yards. Athletes should perform the Linear 3-point Start Technique 2-to-3 times per week with 1-to-3-minute rest periods. 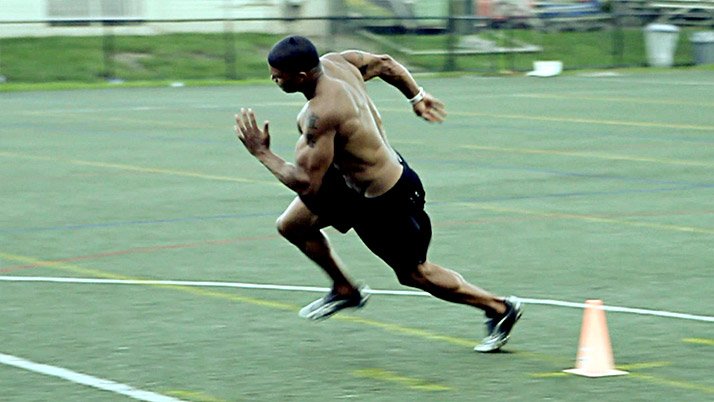 The significance of the 5-yard Radius Arch Run is simple: circular speed. Circular speed is used often in football. It's obvious why it's part of the 3-cone drill. Demonstration of arcing speed relates to many positions in game situations.

The 5-yard radius means the cones are placed five yards apart. If you run in a circle, the radius is going to be five yards, which is identical to the 3-cone drill. Most athletes do great for the first and second five yards, but when they come out of the second stop and navigate the first turn they might square it as opposed to rounding it.

The 5-yard arch radius helps you navigate the first and last turn of the 3-cone drill. You have to throw the head toward the imaginary center of the circle and keep your arms pumping at the same time.

Remember, the legs follow the arms in every instance (walking, sprinting and jumping). If you want to maximize your circular speed and your head is in position (which means your body lean is in position) you want to follow it with rapid arm action. Arch runs make you more efficient at circular running. When you perform the 3-cone drill, it happens naturally.

Arch runs are extremely taxing, so you want to minimize the overall volume; one to the left, one to the right and take a rest. This is easy for athletes to self coach and should be performed once per week with 2-3 minute rest periods.

How To Perform The 5-yard Radius Arch 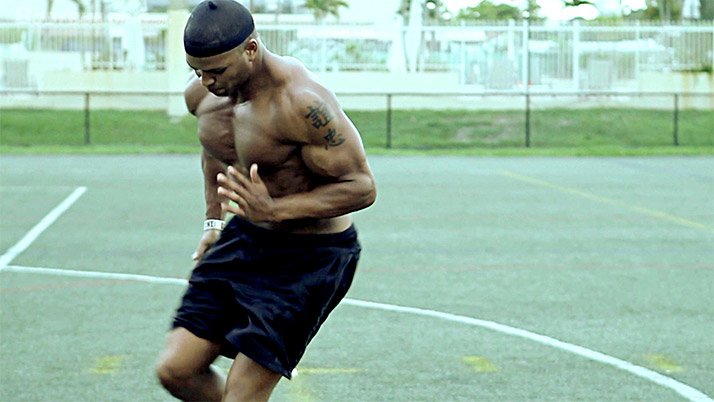 The importance of the single-cone sprint drill is simple. You come to a complete stop and change directions simultaneously, while trying to navigate around a cone without knocking it over. The deceleration components are already built-in to the previous drills. Once you decelerate, make sure to accelerate quickly. Consistently chop the feet and keep the arms moving. The drill teaches quick foot action.

The Single-Cone Sprint Drill should be done the least once per week with short rest periods. Only complete three revolutions. If you do more than that, you're going to get dizzy and it will become a worthless drill. If you have problems coming out of the turn during the 3-cone drill, do three quick single-cone revolutions and take a rest before going back into the 3-cone drill.

Strength is the key. Speed-strength and power-potential can relate to anything. As long as that's set, there's no need to beat up the joints.

How To Perform The Single-Cone Sprint Drill