How real-life hero Tim Kennedy kicks ass in the cage and forges the physique you want.

At 9:30 a.m. at his latest Muscle and Fitness photo shoot, Tim Kennedy walked into the gym wearing a suit. There weren't any cameras out yet, and you could count the number of people he'd see before changing into his workout gear on one hand, but Kennedy dressed for business anyway. First impressions count, you see, and the chance to inspire the handful of people he'd be working with that day had not yet presented itself. That's what Kennedy does. He inspires.

We first profiled Kennedy, a Strikeforce and soon-to-be UFC-middleweight contender and bona fide war hero, in our August 2010 issue. A self-proclaimed "shithead" who went on to a decorated military career as a Green Beret sniper and Bronze Star recipient, Kennedy's story is unique among pro athletes-especially since he's still serving in the military as a combat marksmanship instructor for the Texas National Guard. 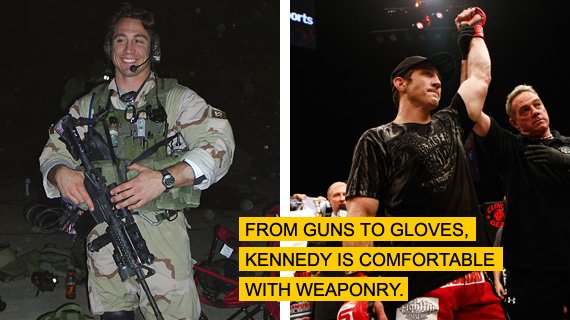 And after multiple tours in Afghanistan and Iraq, he plans on going back. "That's where I belong," Kennedy says. "I have a fixed period of time back here, fighting, and then I'm going back to continue doing my job." For now, however, he's one of the hottest properties in MMA, and the man seemingly no one wants to fight. With world-class wrestling and submission skills, power in both hands and feet, and arguably the best stamina in the sport, Kennedy presents a stiff challenge for any middleweight in the game.

SINCE WE LAST SPOKE

The past year has been a mixed bag for Kennedy. With two impressive first-round submission wins sandwiched between a controversial decision loss to Strikeforce middleweight champion Ronaldo "Jacare" Souza, he's been fighting. But after working for only seven total rounds for more than 12 months, he's hungry for more action, bigger fights, and better opportunities to spread his message that doing things the right way (with class) is the only way to operate.

The loss to Souza was particularly disappointing. "I thought I won the fight," he says. "When you look at the stats, I outstruck him, and I took him down twice." Motivated to step up his training in terms of game-planning, he began working with renowned MMA mastermind Greg Jackson prior to his title fight, and the fruits of their labor, if not fully realized against Souza, were evident in a dominant submission (via rear naked choke) win over Melvin Manhoef in March.

Through it all, Kennedy has maintained a constant state of readiness anyone can emulate, whether preparing for combat or simply getting in shape. The man is perpetually ripped to the bone, always in phenomenal condition, and always prepared to take any fight on short notice. "No matter what I do, it's all about the workouts," he says. "When I travel, I make sure I get my workout in first. When I'm in camp for a fight, I don't travel at all, and I train three times a day. The secret is to just keep working." 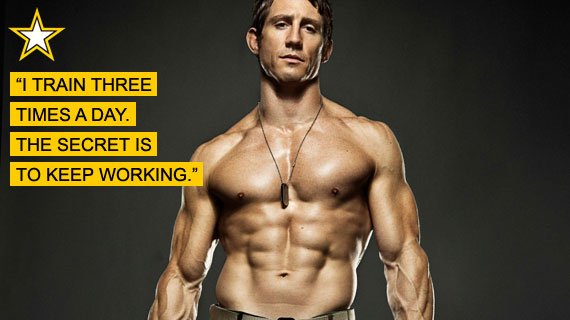 For trainer Coy Schneider, owner of CS Strength in Austin, Texas, working with Kennedy presents a unique set of challenges. "He's already in such great shape," says Schneider, "that we've had to figure out different things to do with him to keep him getting stronger and faster. He also gets bored doing the same exercises, so he needs plenty of variety."

Kennedy's weight training workouts focus on developing power and explosive strength, with templates pieced together in an ever-evolving 4-day split designed by Schneider. His natural weight hovers between 220-225 pounds, necessitating a rather significant weight cut before fights. The idea behind his programming is to incorporate explosive exercises that won't add excessive muscle mass and make cutting more difficult. This means fast contraction movements like box squats, plyometric push-up variations, and medicine ball throws.

"We also use bands and chains with various exercises," says Schneider. "We'll do a lot of box squats with bands for sets of low reps, and we'll follow that up as a superset with some kind of box jump."

Kettlebells factor into just about every aspect of Kennedy's training. From circuits to pure explosive work, he's a major fan-so much so that he insisted a kettlebell exercise (the snatch) be included in his photo shoot. "Kettlebells are the best for everything," says Kennedy. "We do snatches and swings with them for explosiveness and hamstring and lower back strength, and we'll also throw them into conditioning circuits where I'll do a burpee holding the kettlebells and transition into a 2-handed snatch." 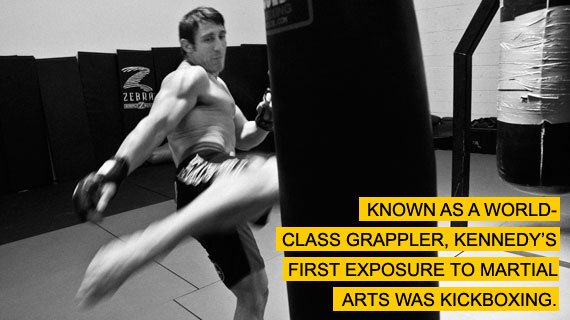 To keep Kennedy's core fight-ready, Schneider uses various med ball throws along with weighted sit-ups, hanging leg raises, and planks. "We want everything working in alignment from his lats to his core to his hips," he says.

Kennedy's posterior chain-the muscles in the back of the body, from the hamstrings to the rear delts-also puts in some serious work. "I love to deadlift," he says, "and it's a huge part of my training because it works every muscle in the body. I hate it when anyone in the gym can deadlift more than me." For Kennedy's posterior chain assistance exercises, Schneider prescribes a healthy dose of Romanian deadlifts and glute bridges.

For the posterior muscles in his upper body, Kennedy performs a variety of band exercises, including pull-aparts and Y's and T's (a series of static holds that work his shoulder girdle stability). 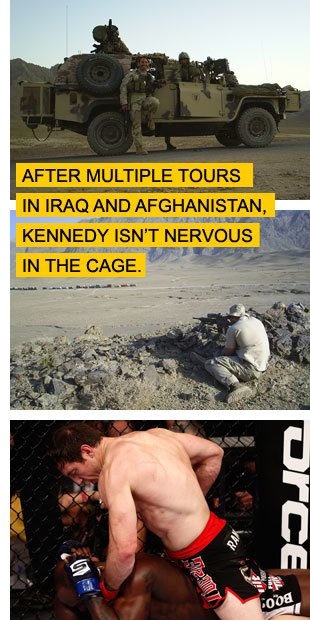 To hang with Kennedy in the cage, you'd better be prepared to maintain a blistering pace for a full 15 minutes, otherwise he's going to wear you down, grind you out, and take advantage of the mistakes you make when you're tired and he's not. His cardio capacity is legendary in MMA circles-to the point where nobody we've spoken to can remember seeing him tired at any point. Ever. Even during extended training sessions where he's rolling and sparring with multiple fresh partners.

Schneider breaks down Kennedy's non-MMA-specific conditioning work into 5-to-6 minute energy system development workouts after his gym training on lifting days, followed by an exhausting 20-to-25 minute metabolic conditioning circuit performed every Friday.

"Fighting is a highly unpredictable sport," says Schneider, "so we set up his energy system work to reflect that. We put him through some different cardio drills that maybe don't traditionally go together, but that fit into that pattern of variability and unpredictability. The main idea with Tim is that he's always in such incredible shape that we have to come up with different activities to shock his body into improving."

A typical energy system development workout entails a series of Prowler pushes, followed by a lateral shuttle, finished off with box jumps or an ab exercise.

"The reason Tim looks and performs the way he does is due to a combination of factors," says Schneider. "His nutrition is always spot-on, and he doesn't eat any crap, but the volume of work he does in training is incredible, too."

That volume includes three daily workouts, two of which are MMA-specific. Four days a week he's in the gym with Schneider first thing in the morning. Later in the day, he'll train his stand-up game, jiu-jitsu, and wrestling skills in separate workouts.

"I'm putting a lot of things together," says Kennedy, "and I have the gas tank, so I'm going to use it. That's why a lot of my fights are finished at the end of the first round. A guy might be bigger or stronger, but if he doesn't have that gas tank and can't use it, it's going to wear him down. Call me a grinder if you want, but I'm going to finish my fights, and the way I train is why." 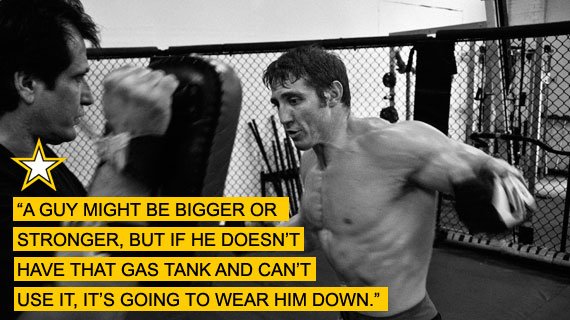 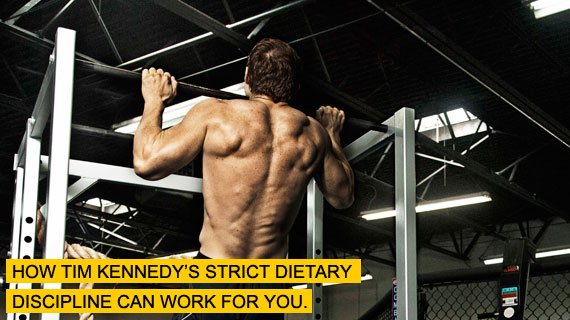 For his diet, Kennedy works with registered dietician PR Cole. He's an exceptionally disciplined eater whose success, Cole says, can be attributed to choosing real foods over processed products, along with several other strategies they've devised to help him stay on track.