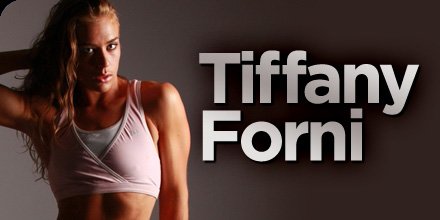 Tiffany Forni is not just another Figure Competitor, but an inspiration to many. "Fat Girl turned Fitness Nerd", is her motto and proves that with drive, determination and a goal, bettering one's self is possible.

After gaining a "freshman 50" during her first year of college, which was an addition to an already overweight physique, Tiffany realized that she needed to make a change. Looking for a quick fix like many, a trip to the mall brought her into a health and nutrition store. After looking around, then speaking with the store clerk, Tiffany came to a hard realization, in order to become healthier and more fit, there was no magic pill but sweat and hard work ahead.

During Tiffany's bodybuilding research, she discovered the mega-site, Bodybuilding.com, which had everything she needed that would enable her to learn about working out, nutrition, and eventually competing. She discovered other people that she could use as motivation. During her time on the Bodybuilding.com BodySpace portion of the website, she decided that it was time to take that next step and get on a bodybuilding stage! Not sure how to go about doing this, more research on BodySpace found her a coach, Sean Calder.

The decision was made on April 10, 2008 entering her first figure competition, the 2008 NPC Seven Feathers Bodybuilding and Figure competition. After finishing third in the tall class, Tiffany was hooked and desired more. One week later, a first place finish awaited the once "fat girl" at the 2008 Northwest Bodybuilding and Figure Championships held in Olympia, Washington. That win allowed Tiffany to become qualified to compete on a national NPC stage. 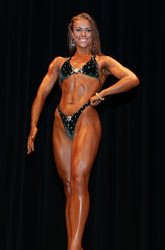 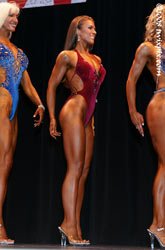 Click Image To Enlarge.
I Placed First In My Height Class At The 2008
Northwest Bodybuilding, Fitness & Figure Championships.

During this time, companies such as Bodybuilding.com, SweatUSA.net, along with others, took notice of Tiffany's transformation from an overweight college student to a winning figure competitor. Bodybuilding.com has been one of Tiffany's biggest supporters and sponsors, featuring Tiffany as the "Transformation of the week" and her likeness on the main page of the website. Tiffany's outgoing and friendly personality has allowed her to become a spokesperson for the company, appearing for them at health and fitness trade shows, while sharing fitness tips, knowledge and her story with fans and the health and fitness community. These companies have found a true gem of inspiration.

No turning back. Tiffany has now fully embraced the bodybuilding lifestyle. With a star of competition gleaming in her green eyes, the once "fat girl" has her sights set on becoming a world class champion figure competitor, spokesperson and model.