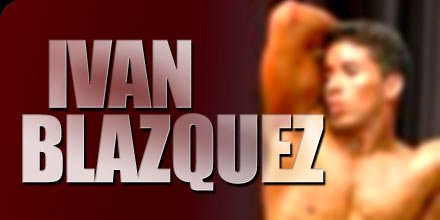 I started lifting weights when I was almost 14. I mainly lifted to get stronger and become a better athlete. It took until the day I was 25 when I ran into this guy, who was showing off his pictures of his recent bodybuilding contest on his cell phone, one day in my college gym.

I went up to him and asked about it and he said I could do it. I was skeptical at first, because I always thought one had to be really big to be a bodybuilder. Also, I have always had the motto that if I commit to something, I always finish what I start, but more so, I succeed to the best of my ability as well! After doing some research on natural bodybuilding, I slowly began to realize that this was something I could do. So I decided to start bodybuilding.

I basically had a good base of knowledge from the start being that I had attained my Bachelor's degree in Exercise Physiology in 2003, and was working on my Master's in Exercise Physiology at the time at the University of New Orleans (Editor's Note: Ivan earned his MEd in May of 2008). However, I lacked the practical experience of bodybuilding.

With the help of some choreographers and a lot of diligent research in nutrition, training, contest preparation, and posing, I began to see the light and logic behind succeeding in bodybuilding. I am an oddity in that; I already knew quite a bit about how to train and eat. However, I had never devoted the time to actually try and do it.

I also got involved because I wanted more credibility as a personal trainer and to take my body to its genetic limit. I want to not only teach people what I know, but I want to be a walking testament to my own fitness philosophies. The ultimate understanding to me is the combination of knowledge and experience.

Back in college, I used to workout at 6-8 months at a time, and I saw changes, but I never took these changes as far as they could go. Now that I am bodybuilding for the long-term, it has been a dream of mine to see just how far I can take my body and how much I can transform and change my body.

See pictures and stats from my BodySpace profile: bodyspace.bodybuilding.com/Ivan25.