These 10 foods will be in no particular order, but they are staples in my daily intake for many reasons.

I just keep hearing so many good things and even new things about these berries. First of all, they are blue, so you know they are loaded with antioxidants just from the skins.

Next they are low in calories and I have read they are anti-inflammatory, reduce blood pressure and are rich in nutrients (Shaughnessy et al., 2009). Not to mention, they taste absolutely great! I get them fresh and frozen. Frozen blueberries have a nice crunch and make a nice addition to cereal, oatmeal or a protein shake. 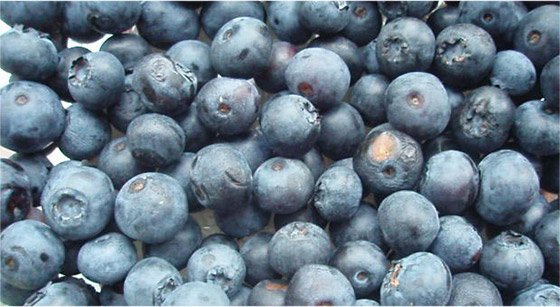 Even the skins Of blueberries are loaded with antioxidants.

In general, any kind will do (instant, old-fashioned, steel-cut). But technically, I like the old-fashioned oats because they are more coarse and thus will have a lower glycemic index since they are not as small-cut as instant.

In fact, there was a recent paper that showed a compound in oats called avenanthramides (AVA) has favorable anti-inflammatory and antioxidant potential (Koenig et al., 2009). Granted, this was a supplement with a higher dosage of this compound, however, the compound is still found in oats, and whether it has this benefit from such a small amount in one bowl of oatmeal is besides the point. The bottom line is, it has this compound and this just adds more credence to the benefits of oatmeal.

I have oatmeal almost every morning and it never gets old or boring. Here are a few of my recipes: 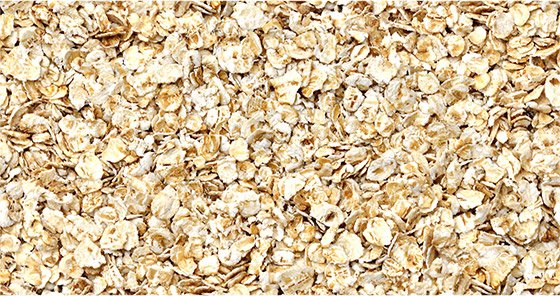 Oatmeal is a great source of fiber, in particular, soluble fiber.
Ingredients
Ingredients

Too many good things. It is rich in monounsaturated fat, rich in vitamin E and other minerals and a decent source of fiber. Studies have shown the beneficial effect of almonds on lowering cholesterol (Hyson et al., 2002; Kris-Etherton et al., 2009). 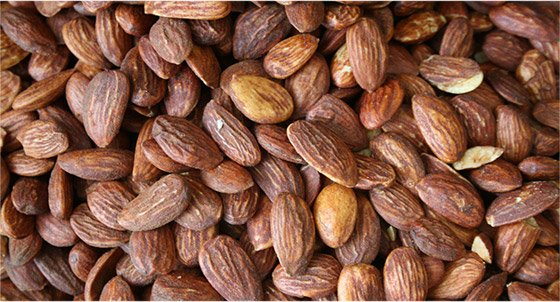 Rich In Monunsaturated Fat, Vitamin E, And Other Minerals, The Benefits Of Almonds Don't Seem To Stop.

Recent research has even shown almonds can even boost exercise performance and help fight fatigue (Yi et al., 2009). I enjoy almonds in several ways. I like them whole or slivered. I even drink almond milk, which has only 40-45 calories per 8 ounce glass! I add almonds to oatmeal, yogurt, salads, smoothies and I love eating them with grapes!

Here is a fantastic salad with almonds: 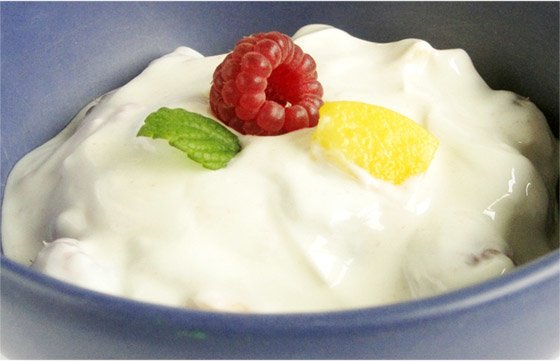 It can be enjoyed anytime of day and is just fantastic.

Just a no-brainer as a staple. It can be enjoyed anytime of day and is just fantastic! It is loaded with calcium, protein, vitamin D and good bacteria to aid digestion and even reducing cholesterol (Ataie-Jafari et al., 2009).

My favorite yogurts are organic Greek yogurt or any other fat-free organic brand. An easy way to sweeten yogurt to taste is by adding the good sweeteners like molasses, honey or dried fruit. 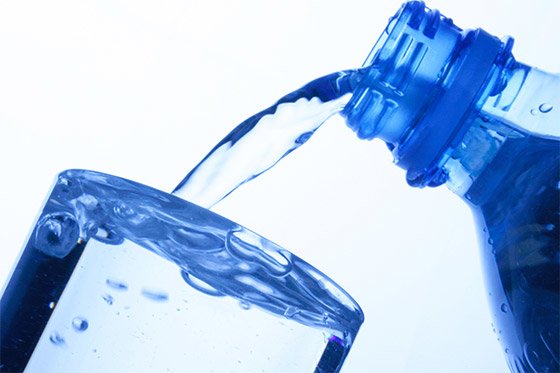 Water satiates, lubricates and accelerates us!

Water satiates, lubricates and accelerates us! Water can boost metabolism (Boschmann et al., 2003). Remember, we are 70% water by bodyweight, so if we keep our aqueous internal environment replenished, this will only speed up and expedite our body's daily functions.

Water also keeps the joints lubricated. So instead of looking for the next hot joint support supplement, why not drink an extra glass of water. So often we take little things like drinking water for granted. Water can also satiate us. Water has a strong effect on creating expansion or distention of the stomach (Geliebter et al., 1988).

So next time you eat a meal and are upset that you are still hungry because you are working so hard towards a weight-loss goal, drink a glass of water. Better yet, drink 4 glasses of water and wait 10-minutes. You could also eat a high-water food such as watermelon or soup and these will also satiate due to their high-water content (Rolls et al., 1999). 9 out of 10 times, you will not be hungry afterwards!

Fresh grapefruit or even the juice are fine. Why do you think there is a grapefruit diet? Apparently this fruit has done something right! Grapefruit is the size of a cabbage ball, yet on 40 calories for the entire thing!

It is one of the, if not the lowest calorie fruit, ounce for ounce. It is rich in vitamin C being a citrus fruit. Grapefruit has also been shown to aid in fat-loss and reduce insulin resistance (Fujioka et al., 2006). 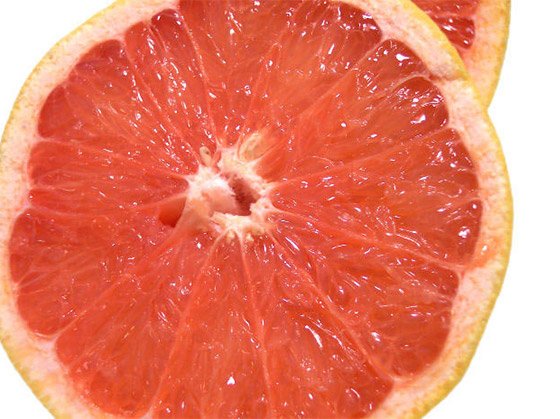 Grapefruit is one Of the lowest calories fruits, ounce for ounce.

Grapefruit also has natural testosterone-stimulating effects (Dib et al., 2009). It also is a good source of beta-hydroxy-beta-methylbutyrate (HMB) (Wilson et al., 2008). Also, it is very satiating and filling being filled with water and having a bitter sweet taste to satisfy any sugar-craving.

Weight-Loss Real-World Application: No matter how bad your sugar craving is at night, eat 1-2 slices of grapefruit then re-evaluate. Again, this will dampen the severity of the craving and you will likely make a healthier choice or eat less of what you originally craved. Best case scenario though, you eat the entire grapefruit!

Remember, this is only 40-calories! Seems like a lot of sweet sugar, but this is why fruit has been called "Nature's candy." Fruit never made anyone fat and even if it did, that would be the world's healthiest fat person. 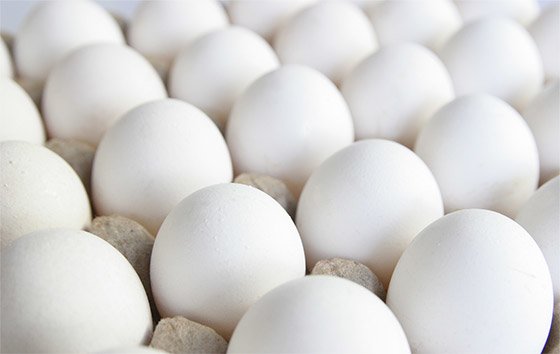 The yolk of an organic egg actually has less cholesterol than conventional eggs.

Yolks or not, this food also has too many good things to not include in the diet. One egg has 6 grams of protein and they contain many positive minerals and vitamins.

There have been reports illustrating how eggs are a staple in the successful long-term success of people who lost weight (Vander Wal et al., 2008). Here's why --> First, eggs are satiating due to the protein content. Protein has an effect on the hormone ghrelin, which is involved in influencing appetite regulation. Too keep things simple, protein will satiate one longer.

I eat organic eggs for various reasons. First of all, grass-fed hens will produce healthier lipid profiles in the eggs they lay. Sometimes we need to think about what we eat.

Eating plant foods are very low in fat and loaded with nutrients. The yolk of an organic egg actually has less cholesterol than conventional eggs.

If I recall, the daily cholesterol value of one conventional egg is 71%, whereas with an organic egg it is only 57%. Plus, organic egg yolks also contain 40% iodine and host other things like riboflavin, zinc, etc. If you recall, iodine is important in thyroid function, particular the metabolism boosting hormones!

Here are some of my favorite egg creations:

I sometimes add the bell pepper to the egg omelette cold, since bell peppers are a rich source of vitamin C and vitamin C is heat-sensitive.

Bromelain is what I'm talking about! This is a powerful anti-inflammatory substance and pineapple is rich in it (Chobotova et al., 2009)! Pineapple is also rich in vitamin C and has just a fabulous taste. I sometimes like to make a great tropical fruit salad with it. 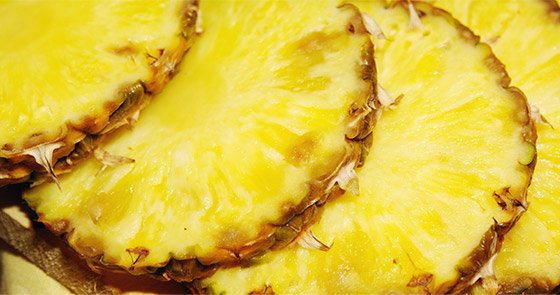 Bromelain is what I'm talking about! This is a powerful anti-inflammatory substance and pineapple is rich in it.
Ingredients

These are the same cherries used in cherry pie. Too bad, because they can be eaten really with anything. I went to the American College of Sports Medicine Annual Science meeting in Seattle this year (2009) and sat in on several presentations of published papers documenting the benefits of red tart cherry juice (Jones et al., 2009; Kuehl et al., 2009). 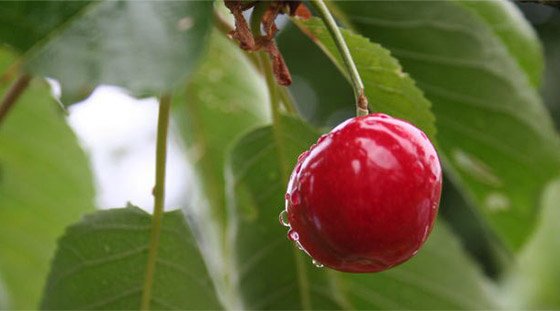 The benefits came from the anthocyanins in the cherries (Keuhl et al., 2009). They promote reduced inflammation and they seem to be protective against DOMS (delayed onset muscle soreness) (Kuehl et al., 2009).

I've been eating them ever since and can attest to there benefits. I seem to recover faster and feel less stiffness in the mornings. They can easily be found in most grocery stores in the canned fruit aisle. I get the brand that has no added sugar, so essentially, I'm eating the cherries themselves and drinking the leftover juice! I actually had a recent breakthrough in a little drink concoction I made and it tasted so good!

I do not know why, but this just tasted so good when I drank it. Glucosamine sulfate is kind of bitter and has a funny taste, but drinking it with this made it taste really good. Actually, the glucosamine actually added a unique taste to the fruit juices together!

I'm not a registered dietician, but I know what are the healthier foods in terms of caloric quantity, carb quality, fat quality, vitamin/mineral quality and naturalness of the food. It would take too long to get into this, but I will gently delve into this a little.

Caloric quantity is the caloric density based on taking the calories per serving and dividing that by the grams per serving. This is based off the book, "Volumetrics," by Barbara Rolls. 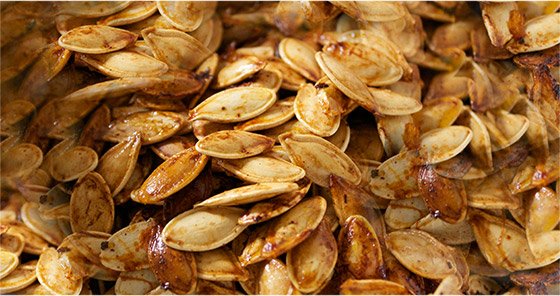 Tamari pumpkin seeds are low in fat, but high in good fat and fiber.

Anything under a 2.5 is considered a lower caloric density food I believe. Carb quality comes from looking at total carbs, seeing how many are from sugars (sometimes one will not know how much is added vs. naturally in the food), fiber content, and sugar in the ingredients and where it falls in terms of numerical order in the ingredient list.

Anyhow, tamari pumpkin seeds are incredibly amazing and by far, the best seeds out there for bodybuilders in particular (I'll explain later) and really for anyone! Let me explain this now: This is the caloric composition per serving:

Do you see anything wrong with this picture?! Most nuts and seeds have a fat to protein ratio of about 2 or 3 to 1. For example, a serving of peanut butter would be 15-18 grams fat, 6-8 grams protein depending on the brand. This goes for most nuts in general. However, these tamari pumpkin seeds have the complete opposite dietary composition! So basically, you are getting a super high protein seed, low in fat, but high in the good fat and high in fiber!

All in all, these 10 foods are a staple in my daily nutrition. All 10 of these foods are natural foods with minimal to no processing and are un-refined. Just the way I like my food and as close to nature as nature intended.