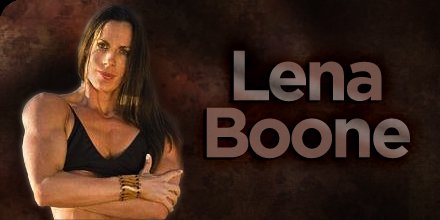 Lena Boone had been a human yo yo most of her life. She began bodybuilding as a way to challenge herself to finally get in shape for a real purpose. In 2004 at the age of twenty-eight, she began serious training with IFBB pro Debi Laszewski. She was nearly forty percent body fat and terribly out of shape. In 2006 she entered her first contest at around six percent body fat and came in first in the heavyweight class. She is now a national level NPC athlete with the ultimate goal of one day becoming an IFBB pro.

Aside from being a bodybuilder, Lena is also a musician and a songwriter. She also enjoys painting and working with animation. Lena is married to Rock N' Roll Hall of Fame inductee Steve Boone of "The Lovin' Spoonful".