Bigorexia: Is The Mirror Lying To You?

There's no need to spend any more time listening to the lies the mirror tells you - He looks in the mirror and gives his best front double biceps. Frustration building, he squeezes his arms tighter and rotates them back... Learn more.

Is The Mirror Lying To You?

The alarm clock goes off at the crack of dawn. Bill reaches across his bed to shut it off. He doesn't really want to get up, but he knows he has a job to do. He gets up, relieves himself and immediately gets on the scale. 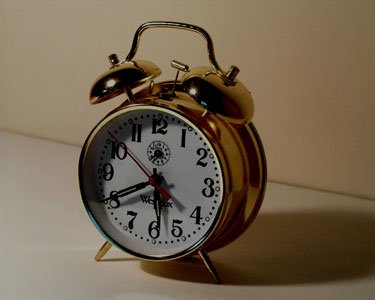 Click To Enlarge.
He Doesn't Want To Get Up,
But He Has A Job To Do.

The reading only reaffirms his inadequacies. He looks in the mirror and gives his best front double biceps. Frustration building, he squeezes his arms tighter and rotates them back farther. Lips pursed, he throws his arms down and shakes his head, sending a few colorful expletives toward his reflection.

Bill throws on his workout clothes: a long-sleeved shirt and sweatpants. He didn't need everyone in the gym looking at his scrawny limbs. After properly covering up, he heads for the kitchen and retrieves two eggs and a gallon jug of eggwhites from the refrigerator.

He had been consuming 15 eggwhites and two whole eggs every morning, but now he wonders if he should increase it. Or maybe he should increase his oatmeal? Bill stands in his kitchen still half asleep, trying to decide how much food he should take in so he can put on more muscle, yet keep from putting on any extra fat. His head spins. He finally decides to add another five eggwhites to his meal.

After breakfast, and getting all his pre and post-workout supplements together along with all his meals for the day and a change of clothes, Bill drives to the gym. He has his back workout all planned out. He's decided to lower his reps and throw in some powerlifter moves to aid in the bulking process. Enough was enough. It was time to get serious.

At five-foot-nine and two hundred and twenty pounds, his physique was a joke. He didn't care how many people told him how huge he was getting, he knew they were either just saying that to make him happy, or simply had no clue about bodybuilding. Bill knew if he didn't put on enough size before his next pre-contest diet, he'd barely make the light-heavyweight class, and at his height that would be a true embarrassment.

Following his pre-workout protein drink, Bill gets to work with weighted wide-grip pull-ups. His left shoulder aches throughout, as it has been for the past several weeks, but he fights through it. He visualizes the width of his lats increasing with every agonizing repetition. Bill had planned to do four sets, but after three his shoulder is killing him.

He wonders if he should just move on to deadlifts when he notices another man doing back squats. He's seen this guy in the gym almost every time he's come in. This is the man that always makes Bill want to work harder. His physique is light years ahead of Bill's. He's huge, wide, symmetrical, cut and perfect.

Bill looks at himself in the mirror in front of the pull-up bar and is disgusted. Even through his sweats, he can see how small he is. There's no hiding it. With refreshed determination burning inside of him, Bill grabs the bar one more time and pulls his body from the floor another six times.

Bill spends nearly two hours in the gym, thirty minutes longer than he'd planned to train. He's aware that he'll be late for work again and even though he's already been warned twice about this, it doesn't matter. He has to get every last set in or it will drive him crazy for the rest of the day.

Bill drinks his post-workout protein shake in the car on his way to work, feeling a sense of calm due to the swelling in his back muscles. Even the burning in his shoulder makes him feel good. He knows he worked as hard as he could this morning.

Luckily for Bill, he got to the office before his boss that day. He'd get away with being late this time. In between making phone calls and sending emails, Bill thinks about his recovery. He wants to exert as little energy as possible for the rest of the day and be certain to get all his meals in on time.

Click To Enlarge.
He Wants To Exert As Little Energy
As Possible For The Rest Of The Day.
Each time Bill gets up to have a meal, he makes sure to swing by the restroom to check himself out in the mirror. Every time he sees his reflection, he is reminded of just how pathetic he truly is.
Then an hour before he's due to head home, his cell phone rings. It's his girlfriend wanting to get together for dinner. He makes up the excuse that he already has other plans. Bill knows he can't be eating out and he's starting to get annoyed at her because she knows this, too. He has every meal perfectly planned out.
The last time he ate out, he was three pounds heavier the next morning, and the last thing he needed was to start getting a gut. He also didn't want to get together with his girlfriend because there was the chance she'd want to have sex. Bill couldn't use up precious energy on sex when all his energy needed to be used for muscle recovery and having enough strength for tomorrow's workout.

After work, Bill heads home. He cooks his sixth meal of salmon and a salad, and sits in front of the television. He pops in a video tape with some shows about bodybuilding he's recorded over the past three years. Even though he's watched these shows many times, he studies them as if he'd never seen them.

Later on he gets on his computer and takes a look at his progress pictures from the week before and compares them with pictures of Jay Cutler. Bill slowly shakes his head like he does every night, feeling the usual feeling of worthlessness building in his gut.

After another meal and a shower, Bill finally heads to bed, but not without looking in the mirror one more time. He goes through a few mandatory poses, only seeing everything that's wrong and nothing that's right. He sends the same colorful expletives toward his reflection that he let loose that morning.

Bill sets his alarm for the crack of dawn and gets in bed. As he drifts off to sleep he imagines himself at his next contest, bigger and better than ever.

So is Bill just a typical hardcore bodybuilder, or is there something else going on with him? Could you describe Bill as being bigorexic? What is bigorexia?

Like anorexia, bigorexia is a form of body dysmorphia, a psychiatric disorder in which individuals will focus their attention on a perceived defect. With anorexics, the defect is being too fat. With bigorexics, it's being too skinny. Bigorexia is in fact sometimes known as reverse anorexia.

Bigorexia currently affects thousands of men and women worldwide, but the condition is most common in males and often begins during the late teens. Bigorexia is most commonly seen in individuals who would already be considered muscular by the average person.

It is important to note that not all bodybuilders are bigorexic. There is a difference between wanting to get bigger and being obsessed and unsatisfied with one's body.

Symptoms of bigorexia include:

Even though there are many people out there who are currently suffering from this illness, as of yet there have been no specific programs developed to treat muscle dysmorphia.

If you feel you can relate to Bill's story and have many of the symptoms listed above, the best first step would probably be seeing your doctor who may be able to refer you to a specialist with experience treating bigorexia. Know that you're not alone. There's no need to spend any more time listening to the lies the mirror tells you.

Lena got tired of being fat and tired! Now, after taking the plunge into bodybuilding, she has turned her life around and looks to continue...