Exercise Of The Week: Barbell Curls.

In this new section on Bodybuilding.com called Exercise Of The Week, we will pick one exercise and break it down into every possible way...

A barbell curl is a pull-type, isolation exercise which works primarily your biceps, but also trains muscles in your forearms and shoulders to some degree, as well.

The following table lists information about barbell curls and the muscles that you use when performing barbell curls.

Allow the barbell to hang at arm's length in front of you, with your hands, arms, and shoulders aligned. While focusing on your biceps and keeping your upper-arms still, lift the bar upwards to your chest, as shown in Figure 2.

Once you've lifted the bar as high as you can, squeeze your biceps and then begin slowly lowering the bar down until your arms are nearly straight, again. 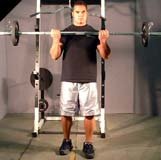 If you're having trouble with leaning back and/or swinging the weight, you might want to place your back against a wall or other vertical surface and position your feet about 2-3 ft in front on you for balance. Doing this will help you to keep the emphasis entirely on your biceps.

Now that you know how to perform regular barbell curls, let's a look at some of the many variations of barbell curls that you might want to use in your arm training.

Wide-Grip Barbell Curls is a variation of barbell curls that emphasizes the inner portion of your biceps. To perform Wide-Grip Barbell Curls, grasp the barbell with as wide of an underhand grip as is comfortable, and stand with your feet about shoulder-width apart, as shown in Figure 3. While keeping your back straight and your head up, focus on your biceps and lift the bar upwards toward your chest.

When your forearms touch your biceps, you've reached the final position shown in Figure 4. As with regular barbell curls, when you perform Wide-Grip Barbell Curls you should keep your upper-arms at your sides, motionless, and don't lean back or swing the weight. Although a wide-grip is shown in Figures 3-4, you can alternatively use a medium-grip, if you would like. 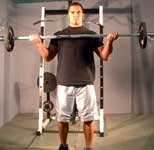 Close-Grip Barbell Curls is a variation of barbell curls that emphasizes the outer portion of your biceps. Performing Close-Grip Barbell Curls is similar to performing the wide-grip variety, except that you hold the bar with about 12 inches of separation between your hands, as shown in Figure 5. Focus on your biceps as you lift the bar upwards toward your chest until your forearms touch your biceps, as shown in Figure 6.

Your upper arms and elbows should remain at your sides and motionless while you move the barbell, and be careful not to lean back or swing the weight. Contract your biceps at the top and then lower the bar under steady control.

If you find that your wrists are a bit uncomfortable during barbell curls, you can try performing EZ-bar Curls. Performing EZ-Bar Curls is just like performing regular barbell curls, except that you use an EZ-bar. The EZ-bar has bends in it that enable your palms to face each other a bit so as to relieve some of the strain that some trainees experience in their wrists.

When you perform EZ-Bar Curls, grasp the outer-most bends in the bar with an underhand grip so that your palms are tilted toward one another. When you curl with the EZ-bar, all the same rules apply as when you're performing regular barbell curls. Stand up straight with your head up and keep your elbows motionless at your sides, as shown in Figure 7. 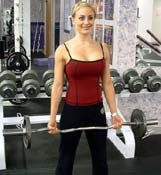 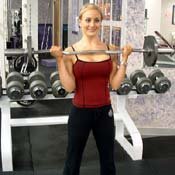 Just as you can vary the width of your grip with a regular barbell, you can also vary your grip with the EZ-bar, too. For example, you can perform Close-Grip EZ-Bar Curls to emphasize the outer portion of your biceps. With Close-Grip EZ-Bar Curls, you grasp the inner-most ridges of the EZ-bar. In the initial position, shown in Figure 9, you'll feel like your arms are making a big V-shape.

As with all variations of curls, you must keep your upper-arms and elbows at your sides, motionless, and don't lean backward or heave the weight. Focus on your biceps as you lift the bar until your forearms touch your biceps.

Once you reach the final position shown in Figure 10, you can fully contract your biceps and then lower the weight under control until you reach the initial position, again.

Another popular variation of barbell curls is Close-Grip Concentration Barbell Curls, which do a good job of isolating your biceps. To do these, sit on the edge of a bench and position your feet about 24 inches apart. Grasp either a barbell or an EZ-bar with an underhand grip, and with about 6 inches of separation between your hands.

You can contract your biceps in the final position and then lower the bar under control. Make sure to keep your body and upper-arms motionless while you're performing Close-Grip Concentration Barbell Curls. 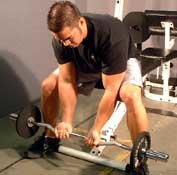 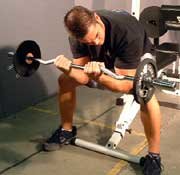 Another way to isolate your biceps is by performing Preacher Curls. To do these, you'll need a preacher curl bench and an EZ-bar, as shown in Figures 13-14. The first step in performing Preacher Curls is to adjust the height of the preacher bench relative to your shoulders. Depending on the type of equipment you have, you'll adjust either the height of the preacher bench or the position of the seat.

Now, use your biceps to lift the bar towards your chin, as shown in Figure 14. You'll notice that the lift is more difficult in the beginning than towards the end. Avoid rocking or heaving the weight in an attempt to start the lift.

It's best to work the biceps hard by slowly lifting the weight under control, both upwards and during the descent, as well. Avoid relaxing your muscles in the initial position (Figure 13); the weight can overextend your elbows, if you're not careful!

As you can see, using the straight-edged side of the preacher bench enables you to move the bar much lower than with Preacher Curls, giving your biceps a deep stretch.

This affords nearly twice the range of motion as the Preacher Curl, discussed above, thus providing more productive repetitions. If you want bigger biceps, then you might consider adding Barbell Spider Curls to your list of "mandatory" arm exercises.

As the story goes, the late Vince Gironda (a.k.a. "the Iron Guru") used to force everyone at his gym in Studio City, California who wanted larger biceps to try Drag Curls. These are quite a bit different than regular barbell curls; as the name suggests, with Drag Curls you'll be dragging the bar upwards along the front of your torso. You can perform Drag Curls by grasping a barbell with a shoulder-width, overhand grip, as shown in Figure 17.

While allowing your elbows to move behind your sides, lift the bar upwards along your body until you reach the final position shown in Figure 18. As with all forms of standing barbell curls, be sure to keep your back straight and don't heave the weight upward. Also, to keep the emphasis on your biceps, you must avoid raising your elbows or shoulders upwards during the lift!

Incorporating Barbell Curls Into Your Training

Now that you know how to perform various forms of barbell curls, let's take a look at some ways to incorporate them into your training.

Since all forms of barbell curls are pulling exercises that work your biceps, it's a good idea to combine them with pushing exercises that train your triceps, which work in opposition to the biceps. For example, one choice is to combine Barbell Curls with Triceps Extensions.

Another option is to combine Barbell Curls with Close-Grip Bench Presses, which also work the triceps. Following is one example of a full-body routine which pairs Barbell Spider Curls with Lying Triceps Extensions.

Another reason for placing the Lying Triceps Extensions before the Barbell Spider Curls is because the triceps are bigger than the biceps; it's a good idea to work bigger muscles before smaller muscles.

This is a highly abbreviated routine that affords more time for greater training volume. Notice that the Close-Grip Bench Press is used to train the triceps, and is placed before Barbell Curls.

Another popular approach is to select alternating exercises that are performed every other workout day. For example, you might choose the following alternatives for a full-body workout.

Many lifters prefer to split up their training so that different body parts are trained on different workout days. Splitting up your training enables you to more thoroughly concentrate on specific muscle groups with more exercises and/or more training volume, as well as giving those muscle groups more recovery time than would be otherwise possible.

Following is one example of 4-way split, wherein different body parts are trained on four different workout day each week.

In addition, splitting up your training gives your back and biceps a whole week to recover before being trained again.

Of course, barbell curls are not the only way to train your biceps. For instance, some lifters prefer to forego direct arm work all together, and instead focus their attention on compound exercises that work large numbers of muscles at the same time, including the biceps.

Others like to focus their attention on compound exercises and then use a couple isolation exercises afterwards to finish off the arms. In either case, if you don't want to perform Barbell Curls, any of the following popular exercises can be used as alternatives.

Be sure to also check out:
Exercise Of The Week: Pull-ups!