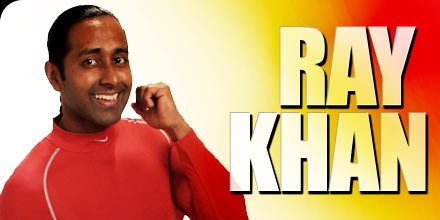 Ray Khan grew up in Guyana, a former British Colony in South America. Ray was diagnosed with asthma at an early age; however, the diagnosis did not stop him from competing in soccer, field hockey, and karate during his youth. At age 17, Ray and his family relocated to Miami, Florida, where he earned his GED and later enlisted in the Marine Corps. After suffering a stroke in the Marines, Ray decided to pursue a degree in education and began training martial arts as a way to regain his former athletic skills.

Although Ray loved being a public school teacher, his passion for multidimensional movement inspired him to pursue martial arts and physical fitness as a second career. His dream was nearly crushed, however, when Ray sustained severe neck and back injuries in a car accident. Ray's determination to achieve his new dream motivated him to not only complete intensive physical therapy, but also to attain his certification as a Personal Trainer (I.F.P.A.). Drawing from his experiences, Ray then created his own program, Kick-Fit Athletics, a combination of strength and flexibility training and martial arts. Ray implemented his program at a Middle School in Miami for the staff and students, his underlying motive being to keep children off the streets and to help develop a special rapport between students and teachers.

In 1999, Ray retired from the Public School System in Miami and moved to Denver. There, Ray earned his Black Belt from one of the toughest fight schools in the Nation - 3D Martial Arts - run by Full Contact MMA Fighter and Sabaki Champion Clarence Thatch. Ray continued his training at the Inosanto Martial Arts Academy in Los Angeles, California, and earned his Instructor certification under Guru Dan Inosanto, one of only two Instructors certified by the Legendary Bruce Lee.

Following his relocation to Denver, Ray worked as a personal trainer at two of Denver's most elite fitness centers, the Greenwood and Cherry Creek Athletic Clubs. The following year, Ray opened his first fitness center, Kick-Fit Athletics, the only fitness center in Denver that currently combines martial arts, strength training, plyometrics, dance and yoga into a high intensity personal training program. He was quick to take his unique and dynamic fitness curriculum on the road, selling it to such prestigious corporations as Liberty Media (Starz, QVC &Overture Films) and Liberty Global, Ray's first Corporate Training Programs.

Ray, now the proud father of three sons, lives in Colorado, where the business he created in 2000 affords him the enriching opportunity to work with some of Denver's top CEOs, renowned musical artists, socialites, fitness and health professionals, and college students. Ray's current clientele is comprised of a variety of fitness levels and ranges in age from 8 years of age to 90.

"I personalize every client program to meet his or her specific fitness needs," Ray explains, "and we work on everything from increased strength and flexibility to self defense and cardiovascular endurance." "My philosophy is that training time should be a case of inspiration not desperation. My ultimate goal is to bring the Kickfit Training program to mainstream America."

Ray has been featured twice in Men's Journal; one of the country's most widely read and respected periodicals, and also in Web MD. He has completed his first instructional book and DVD, available on Amazon and soon Barnes and Nobles, and also writes fitness articles for local magazines.

A few years ago, after having his anterior cruciate ligament replaced and meniscus stapled, getting a new diagnosis of rotator cuff tears and shoulder injuries, Ray realized that despite all his injuries and having to live with some discomfort everyday, nothing was greater than the joy he experienced of living his life without physical restraint or fear. "No one can tell me that you can't pursue your dreams and passion. As long as you remain inspired and passionate about doing what you love to do, you will."