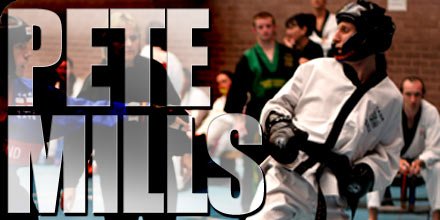 MartialEdge is a British based online martial arts magazine aimed at martial artists of all practices including Taekwondo, Karate, Kickboxing, Kung Fu, Tai Chi as well as catering for yoga, pilates and health and nutrition. It is one of the only online magazines that has a truly professional approach with academic articles and up to date presentation with a large collection of interviews from experts in the martial arts world as well as reviews of films and books.

MartialEdge was founded in 2004 by experienced martial artist Peter Mills who was dissatisfied with what was on offer on the internet for the martial arts enthusiast; his vision was to create an online magazine that could rival anything published in print but via the internet so that it could reach a global readership.

His professional and informed approach enabled him to fulfil his vision with MartialEdge being launched in September 2005 to an extremely positive reception due to its presentation of the core principles of tradition, techniques and performance from a variety of martial artists and general fitness experts that reflect today's martial arts world.

The recently updated format now includes a range of academic, informative and entertaining articles spanning a large range of martial arts and issues connected to their practise and philosophy. MartialEdge has also interviewed a huge number of experienced and prestigious martial artists, the most famous to date being Jet Li, which is evident due to the magazines high regard and popularity.

There is a library of film and book reviews that is growing monthly that the martial artist can refer to when seeking martial arts themed entertainment and reading or reference material. MartialEdge is amassing over a thousand new readers a week which is set to increase greatly due to its free subscription and brand new forum and search archive. The magazine has also gained professional recognition by winning several business awards such as the White Rose Business competition and many others.

MartialEdge is continuing to grow and expand its readership and is currently looking to receive more contributions from martial artists who want to write about their experiences and current issues. The site is now looking to increase its capacity for advertising, which due to its rapidly increasing readership, will be a wise investment for anyone wishing to gain exposure for their product. MartialEdge content and format lends itself to continued further development and is proving to be the future in martial arts publishing.

In December 2006 the latest development in the site was launched, with the Martialedge online store where martial artists can purchase quality martial products tested and approved of by the MartialEdge team.

To overhaul the general functionality of the site, making it more user friendly. Also in the next six months there will be an online media section where users can upload there images and video. Exciting Times!