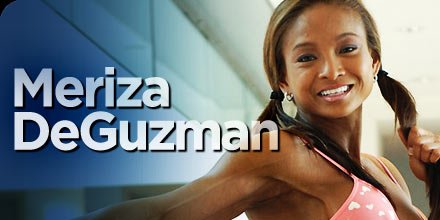 I'm a Capricorn. I am a Filipina. I have two brothers and a sister. I'm the oldest of us 4, so some of my first "workouts" included chasing my siblings around! When I was 17, I moved to California with my whole family.

I'm a Catholic school girl. I grew up in a very strict household. As a young girl attending St. Mary's Academy in Manila, our school days were long! My athletic background included gymnastics and cheer.

I trained in gymnastics from the age of 6 until high school. (I also remember my mom "forcing" me to play piano too, but that didn't last very long).

In high school, I played volleyball and track. I also became more serious in competitive cheer. (I was even cheer captain!)

When I came to the states, everything changed. My Dad got even stricter! My social life was pretty much non-existent. He wanted me to concentrate more on school and family. After high school, I pursued a career in the medical field, since my mom was an RN. I got my college education through the US military.

My Start In Fitness:

I worked in the emergency room at the Naval Medical Center in Portsmouth , Virginia. After more schooling, I ended up working in the Laboratory. I got transferred to Japan in 2000.

After the birth of my daughter, I gained weight, which caused me to start hitting the gym! Not knowing much about exercise, like most girls, I turned to magazines like Oxygen and Muscle & Fitness-Hers for tips. Once I joined a gym and started exercising, I found that my body changed faster than I ever thought it would. This got me excited to learn more. I explored further and got my personal training certification through Coopers Institute, ACE and AFAA. This is when I fell in love with personal training.

It was (and still is!) the most rewarding feeling to help my clients change their lives through healthy living and fitness! I loved it so much, I gave up my career in the medical field to pursue what my Dad calls, my "hobby that has gotten out of control." It's funny, but I can't think of a more fulfilling career than guiding people to improve their quality of life through exercise and nutrition.

Meriza is a personal trainer and physique competition coach in San Diego. She recently released her first DVD, The Art of Figure, which features tips on training, nutrition, posing and presentation for Figure competitors. Meriza can be contacted for 1 on 1 presentation coaching, or personal training and contest prep at www.merizafigure.com. Meriza is sponsored by MAN Sports and uses several MAN Sports products during her contest prep.

I did my first competition in 2002, the Ms. Yokusoka Bodybuilding Championship (yes, bodybuilding!) There wasn't a figure competition in this show and there were only 5 competitors in my class. I can't believe I got the overall trophy! It was in Japan that I met my friend, Masae Tagami. She's now an IFBB Pro Figure athlete! She was my first role model in this sport.

In 2003, I moved to San Diego , where I continued my career as a personal trainer. Funny enough, I went to my first NPC event here, the 2004 World Gym Classic where I ran into my friend, Masae again. She was onstage, winning her first show in Figure! That's when the bug bit me again!

Since then, I've competed exclusively in the NPC.