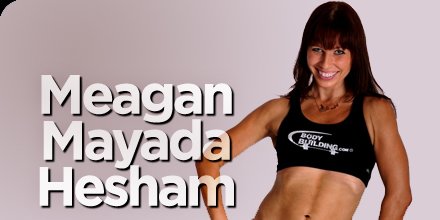 I have been involved in the fitness world in many different capacities for the past ten years. Through the years I've worked as a personal trainer, dance & exercise group instructor, fitness competitor, gym worker, and dance studio owner. My love of dance and fitness began at an early age. I started dancing in a kid's community Latin dance troupe when I was ten years old and have continued until now with tap, Latin, Brazilian, and Egyptian Bellydance.

In high school my mom surprised me with a membership for me and her at the local YMCA. I became totally addicted to going there - working out with the weights, running, playing soccer with the big men's league, swimming, taking aerobics and aquafit classes, and later taking their fitness leadership course and becoming an aquafit instructor myself there. I also worked out at home to a Jane Fonda workout video almost everyday. I always wanted to lose those last pesky 5 - 10 pounds in high school - I didn't want to be the 'big' girl. I never lost a pound though because I would never give up my dear junk food!

When I was about sixteen I started bellydance lessons. I started them as a fun hobby and never in my wildest dreams thought much more would come from this fun activity... was I ever wrong! I really underestimated the power of this empowering dance. I started to become obsessed with bettering my dancing, delved deeper into the whole bellydance scene here in Toronto, and started performing with an amateur dance troupe.

Soon I got asked by my teacher to do professional group and solo shows. There I was out there shaking my body with a big bare belly! I can't tell you how great bellydance and surrounding yourself with a culture like the Arabic culture is for your body image. All of a sudden you're being praised for your feminine curves. So, I became a professional bellydancer full-time! But I couldn't leave fitness behind all together, so throughout the years I took on various part-time jobs in gyms and recreation facilities.

In September 2003, I opened my own dance and fitness studio - Flow Fitness! Teaching over fifteen bellydance classes a week has really taught me a lot about women's body image, weight issues, and confidence levels. I think I've heard it all - the good, the bad, and the ugly, but I found a lot of what I heard quite negative which was depressing to me - and this is exactly what spurred me on to continue teaching more and more of these classes that embrace women's bodies of all shapes and sizes and at the same time gives participants a great workout and a feeling of empowerment and control over their bodies and their lives.

Bitten by the competition bug...

I first saw a fitness competition on TSN and immediately knew I needed to get in on that action myself! It seemed to be the whole package combining my main passions in life - performing, dance, and fitness all put together!!! Plus, what great motivation for me to lose those unwanted pounds and get into the best shape of my life! I started attending shows as an audience member and researching different divisions and organizations.

I hired a personal trainer, and a gymnastics/routine coach and ended up doing my first competition at WNSO's FAME 2003 with a bellydance-themed routine. From that point on, I've been totally addicted to the fitness lifestyle and followed that up by competing the next year at FAME 2004 in fitness model and fitness categories (with a routine I really felt much more comfortable with!) I had a lot more info under my belt by this point as I had gotten a lot of tips and pointers from Angel Davis who knows everything about posing, routines, diet, etc. and was very generous with all her knowledge!

I gained lots of weight throughout my pregnancy tipping the scales at 222 pounds in August 2008 before giving birth to my beautiful baby boy! I took it easy for a few months after birth, but in January I got serious about getting fit and made a goal of competing in fitness and figure competitions in June and July! I lost a total of 87 pounds from September 2008 to June 2009 - 62 of them being pure fat since starting my serious plan in January! Since then I've maintained my fitness lifestyle running everywhere with my baby in a jog-stroller and squeezing weight workouts in while he naps.

I have big, bold plans to compete more and more in Fitness Model, Bikini, and Figure categories in the future! I've also started super-successful 12-Week Body Transformation Programs at my studio as well as by correspondence where I help people change their lives by taking control of their workout and eating habits, cleaning up their lives, and losing tons of pounds and inches. In January 2010, I will also be taking on future fitness competitors and prepping them for competitions.