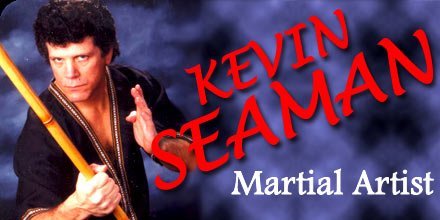 Kevin Seaman grew up in Southern California. Ambitious and independent as a youth, Seaman always sought to improve himself whenever possible, starting his first business at 23 years old in Santa Barbara, California.

Seaman began his formal martial arts training in 1970, using it as a method of self-development and personal discipline. To date he has achieved advanced instructor levels in seven different martial arts systems, totaling eight Blackbelts, and is a certified boxing coach, certified police defensive tactics instructor, published author and certified trainer. He also has an extensive background in exercise physiology, strength and conditioning, and nutrition.

He was personally trained by Bruce Lee's Top Student and Protege Mr. Daniel Inosanto for over 20 years, having achieved one of the highest ranks awarded by Mr. Inosanto. In addition to this, his study and application of the art and science of personal achievement and performance coaching has spanned over two decades, and he has read over 200 books on the subject, studying with some of the greatest minds in the field.

Mr. Seaman has an extensive background in the education and coaching of dozens of competitors in Thai boxing, kickboxing, boxing, shootwrestling and full contact stickfighting. For nearly 20 years he owned and operated his own gym (http://www.ewmaa.com/), one of the largest of its kind in New York State.

He has had a positive influence on the athletic careers of high school and collegiate athletes, Golden Gloves State Champions, Empire Games medalists, national champions, All Americans, and international champions. To date, he has trained, coached and educated thousands of athletes, coaches, trainer's police personnel, and business people.

Kevin Seaman has also taught in the Athletic Department at in the Cornell University since 1993. Mr. Seaman teaches more classes in the Athletic Dept. than any one instructor, and teaches his system of peak performance technology, "The Winning Mind Set" as a credit course at the Ivy League University.

Kevin has also personally competed in the martial arts on a regional, national, and international level as "Eastern National Champion" in both floor forms and full contact sparring. At the age of nearly 40, competing as one of the oldest members of the United States Team, Mr. Seaman was a World Champion Silver Medalist in full contact stickfighting, competing in south East Asia at the 1992 World, Kali, Arnis Championships at the Aquino Memorial Stadium in Manila, Philippines. He has been a professional educator for nearly 30 years, having influenced literally thousands of individuals.

Kevin Seaman is available for private training, consultation, coaching and speaking engagements. To inquire or if you would like to book Kevin for an event, team training or individual training contact us at the e-mail address listed below. He guarantees his services 100%.

Three time Hall of Fame inductee, being inducted into the ZDK, AMA and World Martial Arts Hall of Fame's. Honored for a Diamond Lifetime Achievement Award in Atlantic City in 2001, at the largest Black Tie event of its kind ever, in the history of the martial arts.

A published author, Kevin has written and had numerous articles published in some of the leading trade magazines. First book published in 1999 was well received, distributed worldwide with second printing. Second book nearly complete.

At the age of 37 was a World Champion Silver Medalist in full contact stickfighting, competing in south east Asia at the 1992 World, Kali, Arnis Championships at the Aquino Memorial Stadium in Manila, Philippines. Three time Eastern National Champion in full contact fighting.

Well over a hundred competitors in various events in the martial arts and boxing. Worked with thousands of other athletes with the goal of enhancing their personal performance in soccer, baseball, basketball, hockey, gymnastics, rugby, lacrosse, swimming, track and field, fencing and various martial athletics.

Certified Full Instructor - Police Defensive Tactics and Level 2 certification instructor in the Asp (collapsible police baton). Certified: 1987 Joel Kirch, Defense Systems International. Worked with over a hundred officers from various police forces from federal, state and local, as well as, personal and public security personnel over the past 19 years.