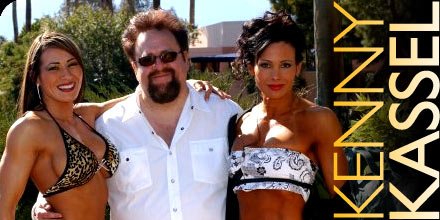 Kenny Kassel was involved in the fitness industry for over 25 years and in the entertainment industry for over 15 years. Kenny had been training with weights since he was 14 years old. He was lucky enough to have learned how to properly work out from legendary bodybuilders like Tom Platz, Danny Padilla, Robby Robinson, Leon Brown, and Pete Grymkowski, while visiting California in the 1970s.

After starting a gym, he began training many bodybuilders, and specializing with the women, starting around 1981. Kenny also had some of the professional athletes in his native NY area, such as members of the NY Yankees training in his gym. He worked with several members of the 1986 Super Bowl Champion NY Giants.

His foray into the entertainment industry began when he started Beauti-Fit Talent Agency, in order to start and nurture the careers of model Raye Hollitt, who became a star of the popular television show "American Gladiators." Kenny also worked with several women who were bodybuilders and were marketable and helped them find work doing guest performances, and receiving major media coverage.

Kenny managed the 1989 National bodybuilding Champion Sharon Marvel, and later on managed 2000 Ms. Olympia Valentina Chepiga. In the early 1990s a friend who was a trainer and had moved out to California to train film stars introduced Kenny to 11-time World Kickboxing Champion Don "The Dragon" Wilson, who had already starred in over 20 action films.

Don had needed some fitness people for an upcoming film, and Kenny was able to provide what he needed. Their friendship turned into an opportunity, when Don asked Kenny to be his business manager.

Kenny also did some casting work for Don's last 7 films, and casting for film and television projects for other producers, as well. Kenny was a mentor for many women who competed in fitness/figure/bodybuilding, and did seminars dispensing information about how to market yourself, and how to break into the entertainment industry.