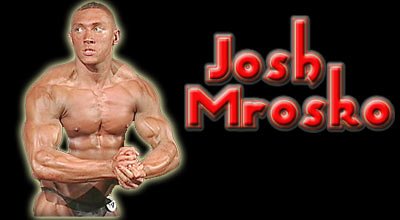 I live in Pennsylvania. I started weight training when I was 15. It branched off from wrestling, but I then just fell in love with weight training and bodybuilding. I started getting serious when I was 17. The guy that owned the gym where I got started training told me that I had some real potential. He also was a real good bodybuilder. When he started training me I was 5'7'' About 180lbs soft but after a few months of hardcore training I made some good improvements. So when I was 18 he talked me in to doing a show. So I did the 2000 NPC Pittsburgh Bodybuilding Championships as a teenager. I started my contest diet at 195lbs and competed at 168lbs that year. I will say that the diet was brutal and yes I will say I did cheat a few times. I took second at the Pittsburgh that year as a teenager. Not bad but not good enough. I swore after that I would never cheat again because second wasn't good enough.

So when I was 19, my trainer told me I should do the 2001 Teen Nationals. So I did. I started dieting at 205lbs and went down to 174lbs for the Nationals and I never cheated. I was never so focused. I took 5th At the Nationals. So then I said I wanted to do another show. I then did the 2001 Northeast Classic. I competed at 176lbs. Which I took 1st as a teen, 1st as a novice and 2nd in the open middle weight. I then went to bulk up this past year. By the end of November I hit 240lbs, the biggest I ever have been. I then cleaned up the diet a bit. Now I'm getting ready for the Collegent Nationals on July 19th and 20th. I started dieting at 220lbs. I am currently 193lbs and pretty cut. I don't know whether I will do it as a middleweight or a light heavy weight.