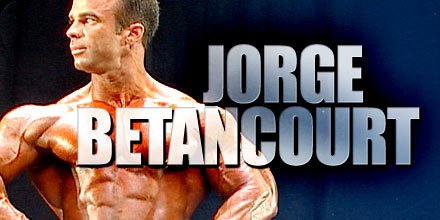 Once upon a time bodybuilding was actually about building a perfect body. The physical ideals were based on classical Greek sculpture and emphasized aesthetically pleasing shape, symmetry, and proportion.

The first and best-known example of this sensibility was Hollywood actor and Mr. Universe Steve Reeves, and others followed in his footsteps such as Frank Zane, Bob Paris, Serge Nubret, Lee Labrada, and Francis Benfatto. As the standards shifted toward gargantuan size beginning in the late 1980's, the classical look became increasingly rare.

It was at this time that a muscular prodigy from Miami named Jorge "Chic" Betancourt emerged on the competitive scene. His complete development from head to toe, round muscle shapes, flawless structure and symmetry, and crisp conditioning had never been seen before in one so young.

After winning the Teenage USA in 1989 and the Teenage Nationals in 1990, he quickly became as popular as the top contenders for the Mr. Olympia title, receiving hundreds of letters from fans around the world every week. He appeared extensively on ESPN's bodybuilding programs and starred in the best-selling video Teen Wonderboy.

In 1991, the handsome Cuban immigrant became the first and only teenager to win the Southern States, a prestigious regional event. At 5-5 and 165 pounds, he handily defeated men as much as fifteen years older and seventy pounds heavier, proving that quality is in fact superior to quantity. There was talk of him becoming one of the greatest bodybuilders of all time.

Then, just as suddenly as he had appeared, he vanished from the public eye. Though most young men in his position would have blindly pursued more titles and trophies, Jorge shrewdly decided to make his mark on the business side of the fitness industry rather than as an athlete.

During the 1990's he built a successful personal training facility in trendy Coral Gables where he employs a full staff of certified personal trainers and focuses primarily on executives and housewives. More recently he turned his attention to the area of nutritional supplements.

"I knew that with the knowledge and experience I had accumulated over the years, I could develop a product line that would give bodybuilders and serious weight trainer's results they could see and feel," he says. "Consumers are far more sophisticated these days and demand that the nutritional supplements they choose to spend their hard-earned money on must be effective," he added. "If your products don't deliver, they will find something else that does."

Based on this mission statement and commitment to integrity, he and his wife Charlene launched Betancourt Nutrition in 2002, with their first product being the revolutionary fat-burner Ripped Juice. "The number one fitness goal for men and women both is to lose body fat," Jorge explains. "Anyone looks 100% better when they are lean and toned, with a six-pack showing," he adds. "The confidence you feel when you are ripped is indescribable, and Ripped Juice has already helped thousands of men and women to enjoy this incredible feeling for themselves."

More innovative products are in the works, including meal replacement powders and protein powders with real fruit pieces, and a revolutionary new creatine formula. Betancourt will also be filming an instructional workout video geared toward teens and young adults who want to learn proper training techniques, an audience who isn't being served properly by the current crop of pro bodybuilder 'watch me strain and grunt' videos.

"You'll be able to build your own routine according to your level of training and your own individual goals. I want people to be able to design their own training program after watching it as well as be motivated to get in the shape they want to."