Why am I a bodybuilder? I came late into bodybuilding, at 72 years of age, when I found myself to look old, think old and act old. I found that bodybuilding not only improved my physique, but it also gave me a healthy perspective on people and the world. I found that it rejuvenated me, made me feel some 40 years younger than my years. It also enabled me to deal with my cancer (now in remission) so that it is no force in my life. 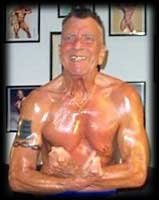 Note: While I am in my 70?s, when there are not any others of that age, I compete in the most senior class there which can be as young as 40.