James Villepigue is an International best-selling author of more than 26 books. His flagship book series, The Body Sculpting Bibles, has sold more than 1,000,000 copies over the last 12 years.

James earned a Bachelor's of Science (Marketing) degree from Hofstra University. He's a professional massage therapist; he received a degree from the New York College of Health Professions. James is also a graduate of the highly acclaimed coach training school, the Institute for Professional Empowerment Coaching (IPEC).

The success of his systems and his extensive training and coaching experience propelled James to appearances on national television programs and multiple publication in nationally-recognized health and fitness magazines as a celebrity trainer.

James' latest project is a book being published by Penguin, publisher to the prestigious "Idiots Guide" book series.

The project will create the first official obstacle race training guide in the marketplace. The title of the new book is: The Obstacle Race Training Bible - The #1 Resource To Prepare For & Conquer Any Course! It will be released in December 2012. 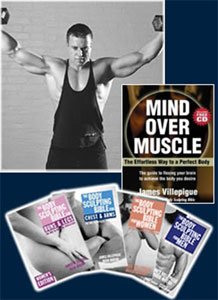 Villepigue was also a Featured Fitness Trainer on Live! With Regis and Kelly.

Villepigue overcame obesity to find inspiration in fitness. He first became a trainer at the age of 18. After years of using training systems to help people fight obesity, he developed his own program and worked hard to encourage new personal training customers to try it out.

"I'm best known for my 14-Day-Body Sculpting Program," he says. "This system was the backbone of my Body Sculpting Bible line of books. The entire system is based on the principles of periodization training."

Villepigue continued developing his programs. Over the last 12 years he has written more than 26 different fitness books, racking up sales of more than one million copies worldwide.

"I am happy to have brought the concepts of fitness and health to millions of people worldwide," he says. "I hope people find the same inspiration and passion for fitness in their lives that I have."

Since becoming known worldwide as an author, Villepigue has brought his fitness gospel to the television screen. He is known as the Featured Fitness Trainer for Live! With Regis and Kelly and has also appeared on various national network morning shows as well as on Maury.

"Being able to demonstrate fitness on television allows me to reach more people that really need the help," he says. "I definitely have a mission to help improve the physical activity rate in the world and combat the obesity pandemic."

Villepigue continues to offer personal training services and his books and e-books are available on his website, at major fitness stores and booksellers.