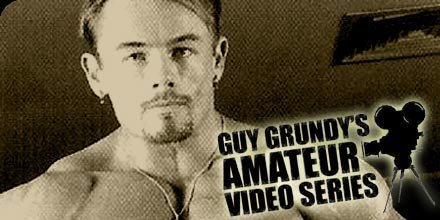 An Express Biography of Guy Grundy:

I was born in a small outer west town of Penrith in Sydney, Australia in 1970. My father & mother where divorced a couple years after I was born, so I lived a great deal of my early life with my mother and various family members.

In those years I was shuffled around so much, that by the age of 13, I had attended no less than 15 schools and I was still unable to read or write. I was diagnosed with and suffered from malnutrition for much of my early life. By the age of 16, I was looking after my self. I developed and suffered from a severe form of acne for a 5-year period.

My case was so bad and, that specialists prescribed me one of the most powerful drugs developed at the time, Roacutane. Roacutane is a schedule 7 drug, which is in the same class as heroine, morphine and the like.

For 99.9% of the population, one course of Roacutane would be sufficient, but as luck would have it I was one of the few patients who had to have two courses. By the time I was removed of it, I had taken a dose that was the highest permitted in Australia at the time.

Anyway, I have battled these obstacles and many more like them on my way to becoming the number 2 amateur Bodybuilder in the World. Testament to this, I have been awarded my US Green Card, under the category of an exceptional athlete. This has provided me with the opportunity to live and work in America, one my greatest dreams and achievements thus far and one of the proudest moments of my life.

I have my own column "Muscle Flashes" in Musclemag, along with Muscle Maniac & others. I am also a freelance photographer & writer, having written over 100 published articles worldwide. I have been featured on numerous magazine covers, filmed and starred in two documentaries on professional Bodybuilding.

One, I did for the BBC which has been seen by over 24 million viewers and is still being screened regularly on British Airways flights to this day. I have also appeared in all of the major Health and Fitness publications and have had the great fortune to tour around the world, where I have performed seminars and guest spots to packed auditoriums and lecture halls.

I have won both my countries national titles, IFBB and NABBA, as well as placing 2nd at the 2000/2001 World Championships.

As I have matured in life, both physically and mentally, I have learned to focus all of my energies into who I chose to be and what I can do with what I have been given, instead of dwelling on past misfortunes and what ifs?

If I can do it then there is absolutely no reason why you can't either. I have learnedâ€¦ "In life it doesn't matter how many times you get knocked on your @ss, it only matters that you get back up & chase what it is you are after."

This is how I have lived my life & I have always believed in myself no matter what I have encountered. I will finish with my favorite quote "AS YOU THINK, SO SHALL YOU BE."