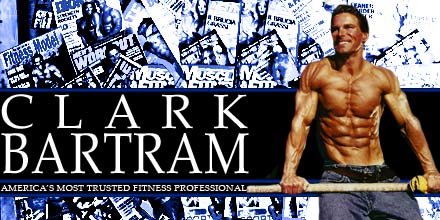 CLARK BARTRAM has earned his reputation as "AMERICA"S MOST TRUSTED FITNESS PERSONALITY." In everything he does, Clark puts forth 100% in the hopes that he can benefit men and women who care enough about themselves and the people they love to do what it takes to "Live the Lifestyle."

As a professional fitness model, Clark has appeared on hundreds of covers including Muscle & Fitness and Natural Bodybuilding.

As a personal trainer, Clark has helped hundreds of men and women transform their bodies and their lives. Clark has inspired millions of television viewers as the co-host of Kiana"s Flex Appeal on ESPN, and currently shares his wealth of knowledge on exercise and nutrition as the host of American Health & Fitness, broadcast internationally.

Clark regularly contributes articles to national fitness magazines like Ironman and Muscle Media, and is also the author of the how-to guide, You Too Can Be A Fitness Model. Clark has recently completed a new book that he considers "my best effort yet" called Spiritually Fit.

He recently introduced the Clark Bartram Nutrition for Fitness supplement line and describes himself as an evangelist for honest nutrition at an excellent value.

As a Christian, Clark is actively involved with the Prison Fellowship - Operation Starting Line as a national artist doing in-prison evangelism. He has worked with the Billy Graham Evangelistic Association as an emcee for the Franklin Graham Crusades, and, through the Men"s Ministry at his own church, gives motivational speeches at school and community events.

In addition to his full-time fitness career and his ministry, Clark is a devoted husband and father.