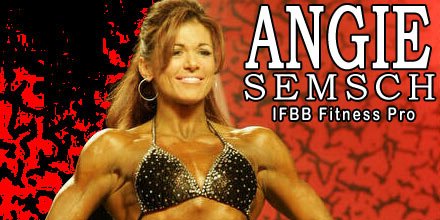 Never count out Angie Monteleone-Semsch in any facet of life. She is the fitness realm's queen when it comes to triumph over adversity. Born without a hip socket, most of us would be satisfied to walk normally. Not Angie.

Fitness competitions became part of her daily devotion in 1998 and by 1999 she competed at the NPC Nationals where she placed an unheralded 15th. All she has done since then is rise to the highest level of the sport by not only turning pro, but competing in the Fitness Olympia.

Turning pro after winning the overall title at the 2003 NPC USA Fitness Championships, Angie made her pro debut at the Fitness International in 2004. Ever vigilant, Angie has moved steadily up the ladder of success and in 2005 she recorded a trio of fifth-place finishes at the New York Pro Fitness, Emerald Cup Pro, and Sacramento Pro Fitness, along with placing fourth at the Charlotte Pro Fitness. Her Charlotte result qualified her for the Fitness Olympia where she inched into the top-ten landing in the ninth-place spot.