A heavy workout totally depletes the muscle, then a light workout forces more glycogen deposition so the muscle fillsâ€¦ Blast your triceps with this workout and learn more as the Q&A talks about going to failure, adding sets, supplementation, and more.

Our recent Bodybuilding.com feature "Super-Saturation for Serious Muscle Size" was all about Heavy/Light training and how it produces extreme muscle size quickly.

Basically, a Heavy workout totally depletes the target muscle, then a Light workout a few days later forces more glycogen deposition so the muscle fills out and pump up bigger and better than ever. More glycogen in muscle tissue attracts more fluid, which equals more mass.

It's a relatively simple concept, and we provided an example using biceps in that previous article. This time let's complete the H/L upper-arm-blasting scenario with a sample triceps attack...

On Heavy day you reduce the poundage on each set of close-grip bench presses so that your reps increase. That heavy-set-first tactic forces more high-threshold motor units (fast-twitch growth fibers) to kick in during sets two and three. In other words, that initial five-rep overload set heightens nerve-force activation, making sets two and three more effective at triggering firing the key growth fibers.

Notice that over those two workouts you train the full arc of flexion, or range of motion, of the triceps-from arms overhead to arms over torso to arms down next to torso. That's 3D Positions of Flexion:

It's a very synergistic program that efficiently covers all the angles and builds muscle fast. As for the Heavy/Light concept, it has generated some important questions, the answers to which can help you get more out of this simple mass-building strategy when you apply it to your own program. Let's go to the first question...

[ Q ] You talk about forcing muscle supercompensation with the Heavy/Light program. The lighter subfailure workout a few days after heavy training is supposed to create a pump that forces glycogen [from the carbs you eat prior to the workout] into the muscle for a supersaturation effect.

It makes sense, and I already feel bigger using it. My problem is that my pumps aren't that great. Should I add sets to the Light workouts? They only have a few for each bodypart.

[ A ] First, be sure you are doing the program exactly as prescribed. For example, you said that Light workouts are subfailure, but that's just for the big, more taxing midrange exercise for each bodypart, like squats and curls.

On the more isolated exercises, like leg extensions and concentration curls, you still train to exhaustion on each phase of a drop set. Going to failure on those less-taxing but more focused exercises provides the most occlusion and should flush the target muscle-triggering supersaturation (excess glycogen storage).

Also be sure you are hitting the higher-rep range listed in the program on your big exercises on Light day. You want to lighten the weight enough from your Heavy-day weight so that you get 10 to 15 reps on each set. That will prime the pump and heighten occlusion during the isolation exercise that follows, which should fully engorge the muscle. (You will be pleased when you see your pumped self in the gym mirror!)

If you don't pump up big, try pushing the reps even higher-like 15 to 18. It's important to fully engorge the muscles with your Light workouts. You also may want to try a vasodilator supplement before you train...

[ Q ] [In the first Heavy/Light article] you mentioned getting about 30 grams of carbs and 30 grams of protein an hour before every workout, and you also mentioned taking a vasodilator. What kind of supplement is that, and why do I need it?

[ A ] Most vasodilators are nitric oxide precursors. That's a compound that helps open up blood vessels for an incredible pump. Yes, a big pump is motivating, but it's more than that-by opening up the blood vessels, you create the environment for better nutrient deposition in the muscles.

Remember, Light day is for max flood flow so you send more glycogen from carbs into those still-recovering muscles. Glycogen helps them hold more water and get huge (muscle is more than 70 percent water).

The vasodilators we use are N'Gorge and SuperPump250. We alternate between those two because the SuperPump250 has caffeine, and we don't like to use caffeine at every workout. Both are excellent vasodilators.

[ Q ] I get a lot of crap at my gym when I do the Light workouts from your Heavy/Light program. My friends razz me when I do the Light [subfailure, pump] workouts because I stop short on the big exercises like squats and bench presses. Why can't I just go to failure on Light day too? There aren't that many sets, so I think I can still recover.

[ A ] If it bothers you that much, you can try it (we always encourage experimentation), but keep in mind that the point of Heavy/Light is that on Light day you don't burn glycogen from the target muscle, you use subfailure high-rep sets to force more into storage via a big pump. That's the important super-saturation effect that pulls more water in, making you look bigger and fuller workout after workout-a true size-surge effect.

If you train to failure at both workouts, you'll short-circuit that supercompensation effect. That's the basic principle behind Heavy/Light, and it's a very good one. In fact, as we noted in our previous article, it was one of the most effective muscle-building techniques used by the bodybuilders in the pre-steroid era-they got very big very quickly using it.

Many called the higher-rep pumping workouts "spinning." Back in those days there was a big controversy over what worked better to build mass, spinning (lighter pump workouts) or grinding (low-rep heavy workouts). Of course the smartest guys used both in an alternating fashion, much like our Heavy/Light program. It makes a lot of sense...

As we said, for one you force the muscles to hold more glycogen with a higher-rep subfailure workout a few days after a heavy all-out session. And, this is important, you also give the muscles something new - a unique stress - at every other workout. That will help you grow faster too, rather than doing the same thing every time.

We suggest you try it as listed for five weeks. The new size and strength you gain will no doubt shut those negative comments down cold-and have people asking you what you're doing to get such spectacular results.

[ Q ] You said to get about 30 grams of carbs before each workout in the Heavy/Light program to push glycogen in the muscles so they become fuller [supersaturation]. Won't those preworkout carbs cause less fat burning during my workout?

[ A ] Absolutely, but you shouldn't look at your weight-training sessions as a way to burn more fat-you want them to build and fill out your muscles to the max-as large as possible as quickly as possible. So use the preworkout carbs when you're on the Heavy/Light or any of the programs that follow a similar protocol. 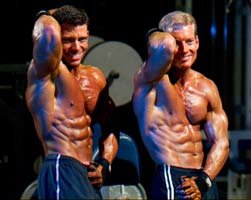 A weight-training workout doesn't burn a lot of calories because it's anaerobic work-dependent on stored glycogen for short-duration muscle contraction. So why derail the supersaturation size process for a little extra fat burning? Don't think of your weight workouts as fat burners-they are muscle builders, so maximize those effects!

Cardio is for fat loss. In fact, if you do it immediately after your weight-training workout, you will have already cleared all of the sugar from your bloodstream-most of it has been shuttled into the muscles you trained-and your post-weight-workout cardio will tap into fat stores almost immediately.