In the world of physique competition, not taking performance-enhancing drugs is referred to as "natural" bodybuilding. If a bodybuilder takes minimal steroids, some consider it mostly natural or "close to natural."

You are either a bodybuilder who takes drugs like anabolic steroids and growth hormone or you're a bodybuilder who doesn't. That means you're on one side of the fence or the other. There's no going back and forth.

I was the typical teenage bodybuilder. I ate, slept, and lived bodybuilding. (I guess I still do. Not much has changed in my life, huh?) I, of course, used to read all the muscle mags. Flex was my favorite.

The premiere issue of Flex came out in 1983 and it was so much better than the other mags. I liked Muscle Mag Int'l back then too. It had photos of the big dudes actually training and not all the posed stuff while wearing the latest fashion accessories for training.

I ate up all the info - including the big lie that you didn't need steroids to make it as a pro. It was stated that they were a very small part of the journey. I was determined to become the first Mr. Olympia without ever using steroids or STH (yeah, GH had a predecessor called somatotropic hormone).

I knew it was possible. After all, as I read, Arnold had never even heard of steroids until he came to America and then he only used them for refinement because he had built up to a solid 250 pounds naturally over in Europe. I know; call me naïve.

Without drugs, I made good progress as a teenager. I started out really skinny but I managed to put on some size and I was the strongest kid in my high school.

In bodybuilding, however, you compare yourself to everyone who is bigger than you and gains never come around fast enough (When was the last time you heard someone say they had to cut back on their training because they were growing too quickly?). I started competing my senior year and did very well. I even won my class at the Mr. Continental USA in Chicago. Current IFBB pro Chuck Sanow won the overall at that show.

That was the same year my brother had opened a second gym in the neighboring town. We had a few powerlifters and bodybuilders at that gym. Many of those guys were obviously using performance-enhancing agents. Joe was one of them. He was incredibly strong and he would routinely rep out with four wheels and more on the bench press.

Joe was notorious for holding his breath through sets and, on more than one occasion, popped a blood vessel in his eye from straining too hard during a set. Joe was only 19 when I first met him... I thought he was already nearly the size of an IFBB pro.

Joe usually worked out with a couple buddies who were also juicing. Those two weren't as strong or as big, but they did well in powerlifting meets and bodybuilding contests. The three of them trained like animals and hoisted huge amounts of weight.

They also ate like small horses and shared stories on how their appetites were unbelievable. They consumed entire large pizzas by themselves after their workouts.

I watched these guys for a couple years and I envied the way they looked and the amount of weight they threw around. I wanted that size and strength, but I had decided years earlier that I wasn't going to take the drugs to get there. That was non-negotiable for me but I couldn't help thinking what I'd look like or how much I'd be benching if I tried a cycle or two of D-bol or how much more I could eat if I stacked some Winstrol with it.

I remember a conversation I had with Joe when I was contemplating shelling out a small fortune for a new supplement kit that promised wonderful and extraordinary results.

"How much do Biogenics cost?" he asked.

"You can get a bottle of D-bol for $25 and it'll last you for six weeks. And it WORKS!" he shot back. I told Joe I knew of a guy I had competed against (and beat) that had put on 25 pounds of muscle from using Biogenics.

"How well do you KNOW this guy?" Joe asked me point blank. I reluctantly admitted that it was really through the grape vine that I heard of his progress and didn't really know him.

That was in the mid 1980s. My arms measured nearly 16 inches on a good day and that's if I had eaten enough carbs to bloat me like a balloon. Joe's arms were 21 inches, but he always said with a grin, "They tell me they want to be 22 by next year." He was only a year or two older than I was and we'd both been training for about five years, but he was much bigger and probably twice as strong.

He benched more than 500 pounds before he turned 20. I still hadn't done a one-rep max with 300. I couldn't help but wonder what I'd look like if I used his performance-enhancing agents. Maybe I'd be the one strutting around the gym with nearly 22-inch arms.

In the beginning of my senior year, I saw Pete Moen, who, at the time, was two weeks out from winning the Mr. USA. He was guest posing at - don't laugh - The AAU Defeat of Jesse James Bodybuilding Showdown. I could not believe the size of Pete Moen. He was a monster. I saw him backstage and I just stared in awe. I asked him a few questions. I'm sure he was very impressed with my highly intelligent and unique questions.

"How much do you bench press?" I asked.

"They're taping a little over 20," Pete replied.

Pete was very polite despite my juvenile questions. He had one of his buddies telling him they had to go, but he fired back to him, "Just wait! This kid has a few questions first. Go ahead, kid." I was very impressed that he took the time to answer my questions.

After seeing Moen that day, I started to realize that the magazines were selling a lie. There was absolutely no way I was going to look like Pete Moen without steroids and whatever else these guys took to look that un-natural. Cool looking? Yes, but definitely not natural looking. Although I wanted to look like Pete Moen, I knew deep down inside that I was chasing a dream that I could never attain. 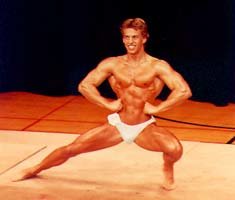 The more competitions I went to, the more I saw guys that were juiced to the gills. One guy in particular, who attended most of the shows, but rarely competed, was HUGE. He couldn't have been more than five feet, four inches tall and he probably weighed around 250-260.

It was rumored that he ate 10,000 calories a day. Joe worked out with him every once in a while and went fishing with him one afternoon. The guy brought two grocery bags full of food into their boat for an afternoon of fishing. He basically peeled and ate raw potatoes the whole time while Joe and the other guys fished.

My competitive time spanned about two years. In that time I defeated some guys in one contest only to have them put on 20-30 pounds of lean muscle by the next show, which was only six months later. They would credit it to training and dieting on egg whites and taking free-form amino acids, but I was training just as hard and probably dieting harder.

It was frustrating back then to see other guys making such incredible progress but my gains always came at such a slow pace. It's still very frustrating today. 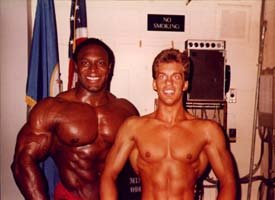 The Sport Of Bodybuilding Has Two Sides

You either take performance-enhancing drugs or you don't. You can't really argue against this statement. Some guys start out the "natural" or drug-free route, but ultimately decide to take steroids at some point. Other guys might have done a few cycles and then stopped, but they have used them. Then there are the guys who have never used and never will. These guys consider themselves lifetime "naturals."

It gets interesting at this point. Why? Because some steroid users think the "naturals" are wasting their time and are selling themselves short on the progress they could make. Some "naturals" think the drug users are cheaters because any gains made from drug usage are synthetic. Both sides have those who are adamant that they are right and that the other side is stupid for being the way they are.

Some of the guys in the steroid camp even scoff at the name "Natural Bodybuilding." They claim there is no such thing. "Competitive bodybuilding is such an extreme sport that you have to resort to extreme measures," they argue. Even mega-doses of vitamins or herbs aren't natural. Neither is creatine.

Sure it comes from meat but you'd have to eat about 20 pounds of beef a day to get your typical five-gram dose. Therefore, if you take anything other than food and take supplements that are made in a laboratory, you are not "natural."

So it's the label of "natural" that gets steroid users feathers ruffled, right? Well, not necessarily. "Drug-free" is another label that drug users aren't fond of. Why? Because "drug-free" implies that someone is, well, drug-free. Ephedrine and other over-the-counter medications are used by many "drug-free" bodybuilders so, technically, they aren't drug-free because they use some kind of drug.

Even "natural" federations do not agree on the list of banned substances. Some use the IOC as their guideline. Another goes a step further by including on their list, many dietary supplements that they have considered questionable. I had to laugh at one list of banned substances because many items on that list were recognized (by the general bodybuilding community) as being worthless supplements.

Another federation is only concerned with steroid and growth hormone use. Anything else, including over-the-counter medication, is okay to use. If you can legally walk into a store and buy it, you can use it. That makes a shorter list now doesn't it?

The organizations that do not claim any association with being drug-free or natural don't test at all. They have no list.

The professional division of the IFBB claims to test for diuretics but after Jay Cutler threatened a lawsuit in 2001 after he failed a non-IOC regulated diuretic test during the Mr. Olympia, they threw that testing idea out the window. To my knowledge, the IFBB hasn't implemented a diuretic test since then.

Why Do People Choose Not To Use Steroids?

Every person has their own reasons for not using performance-enhancing drugs. You'll get a variety of answers from every bodybuilder who doesn't use steroids. Among the common responses are:

In talking with people over the years one can come to the conclusion that the general public feels strongly against performance-enhancing drug use. Just read the newspaper or watch cable TV; the media crucifies athletes who fail drug tests. Water-cooler talk agrees with the media too. Steroid use goes outside the realm of bodybuilding.

Somehow it's been accepted that athletes are to work hard and do the best they can with they're God-given abilities. Ever heard the following?

If an athlete - either amateur or pro - decides to take a substance to gain any type of edge, he or she is thought of as a cheater. It doesn't matter what the arguments for the substance usage are, it's deemed wrong - wrong enough for steroids to be mentioned in a Presidential State of the Union Address.

In part two I'll share more on this complicated and controversial issue of steroid use in our sport of bodybuilding.