What's the best workout to increase your bench? It may not be the most demanding or interesting lift, but the bench is the key to building a massive chest. Here are some great workouts, who should avoid it, and more. Read on.

TOPIC: What's The Best Workout To Increase Your Bench?

"What's your bench?" is possibly the most common question a bodybuilder or athlete is asked.

What's the best workout to increase your bench?

Who should avoid this type of workout?

Why do you think bench press is the most common exercise associated with strength, rather than squats, deadlifts, etc?

To use your credit, e-mail Justin @ justin.podzimek@bodybuilding.com for more info.

"What's your bench?", is possibly the most common question a bodybuilder or athlete is asked.

Though it makes up only one of the "Big Three," the bench press gets more attention than both the deadlift and the squat combined, especially among non-bodybuilders. 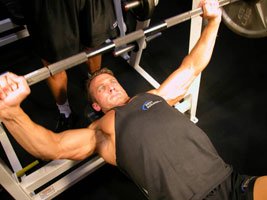 Click To Enlarge.
Of All The 'Big Three' It
Gets The Most Attention.

It may not be the most demanding or interesting lift, but the bench is the key to building a massive chest. In addition, an impressive bench press is a sure-fire way to turn heads and gain respect among hardcore lifters and couch potatoes alike.

No matter how experienced or strong a lifter is, we all experience plateaus. But what separates the best from the rest is the ability to blast through these stopping points and continue to increase strength.

The best way to increase your bench is to apply plateau-busting techniques into your routine, such as altering your routine to offer some variation. This will shock your muscles and challenge them to work harder. So, if your major chest exercise is the flat bench, try a decline or incline bench, or dumbbell presses instead.

In addition to implementing a variety of exercises, this workout features an array of different techniques designed to stimulate both your fast- and slow-twitch muscle fibers to stimulate maximum growth in strength.

Pre-Exhaustion allows you to recruit more muscles to assist the prime movers on the latter set than you normally would, this is a great technique to build strength.

This is an excellent method to ensure you recruit both the fast and slow-twitch muscle fibers and squeeze every bit of strength out of your muscles.

Aim for 6 reps, but perform until exhaustion.

When finished, perform 25 push-ups, and then stretch to cool-down. A great method I like to use is fascia stretching. This stretches out the fibers that surround your muscles. To do this, grab two dumbbells and perform one dumbbell fly, holding the bottom portion of the exercise for 20-30 seconds. Trust me - you'll feel this one. 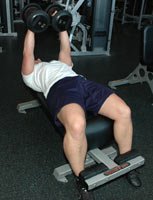 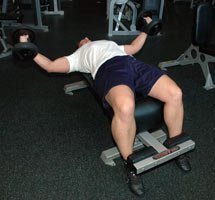 Obviously, this is a very

workout, and I wouldn't recommend it more than twice a week - even once should be enough. You'll also notice that the workout does NOT include a

. This is not an oversight.

If you want to break through a plateau, you have to give your body something different to work with. There are plenty of compound exercises included in this routine, and they will stimulate the muscles needed to increase your bench strength. I also believe that giving yourself a rest on the lift you are trying to improve will be beneficial, making sure you are fresh and fired up when you are ready to bust through your plateau.

Another reason for stalled progress is inadequate

. Without properly fueling your body, you won't be able to build

. Make sure you are getting enough

, and that you are fueling yourself before and exercise. Simply adding a few hundred calories to your diet can make a huge difference.

Rest and sleep is also very important - aim for eight hours per night if you can. Also, do not overtrain - training your chest every day of the week will not benefit you, and will probably hold back your progress. If you are worried that too much training is the issue, consider taking a few days or a week off. You could also have a deload week, in which you refrain from any extreme lifting, such as performing sets to exhaustion.

Who Should Avoid This Type Of Workout?

Anyone who is just beginning should avoid this workout. It is very intense and features a lot of advanced techniques such as drop-sets, rest-pauses and pre-exhaustion. The average beginner wouldn't even be able to define these terms, much less perform the exercises in question. Additionally, beginners won't need to go to such extreme lengths to see improvement.

Also, those coming off of injury should avoid this workout, as the intensity may aggravate the muscles that are being rehabilitated and interfere with recovery. Older individuals will probably also want to avoid this workout due to the high level of stress.

Why Is The Bench Press More Commonly Associated With Strength?

The bench press is much more popular than deadlifts and squats because the muscles that it develops are more visible. Sure, deadlifts are great for your back and hamstrings, but no one is ever going to ask you to flex those muscles or hike up your shorts so they can get a better look.

Simply put, the bench press is "sexier" - an impressive chest is associated with tough guys and fashion models, thanks to media portrayals and movies. While a thick chest wouldn't be enough to wow the judges at the Olympia, the general public would be much more impressed a well-developed upper body than monster quads and calves.

Another reason that the bench press is more associated with strength is because it is much more commonly performed. When first starting out, a lot of lifters will focus on upper body and abs, completely neglecting their lower bodies. This is foolish, as deadlifts and squats are great for improving overall functional strength, but again, a great set of wheels doesn't command the same respect as a nice bicep on the beach.

From my experience, I've seen a lot more people benching at the gym than squatting... it seems some people aren't even really sure what the racks are for.

And last but not least - deadlifts and squats are pretty hard, so some people avoid them for this reason. While bench pressing isn't exactly easy, it is much less taxing than deadlifts, and if most people have the option to do an easier lift that will have more aesthetically pleasing results, they'll take it.

Ahhh... The bench press. Frequently referred to as the king of the upper-body exercises, it is probably the most-performed exercise in the gym. Bodybuilders, powerlifters, and average Joes all recognize the power of the bench press, and for good reason. 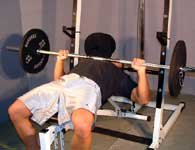 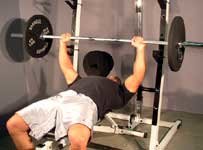 No other exercise works your upper body so thoroughly and completely. Naturally, it is a point of ego among many guys to bench press the most. Below I have outlined a plan that I hope will augment your strength increases so you can 'wow' your friends!

Rep range should be kept low for building strength - 1-5 reps seems to be the optimal range.

should be achieved within this rep range. Naturally, with such a low amount of muscle contractions, you'll have to up the number of sets to adequately stimulate strength-building. Shoot for at least 5 sets,

the weight upwards with each progressive set.

and max power, breaks between sets should be around 3-5 minutes. Outside of the gym, you should rest for a week between each workout for a given body part. Additionally, try to space out the days that you train your

and the days you train your

(the other major muscles worked by the bench press).

Some of the greatest strength-building tools are resistance

, chains, and barbells. Chains and bands provide "linear variable resistance," which means that the weight you're lifting increases as you complete the range of motion. This phenomenon has been proven to be great for improving strength. Barbells allow you to lift more weight (because of the reduced need for stabilizer muscles), and so they are another valuable asset.

In addition to the bench press, you need to specifically target your upper and lower chests for optimal strength.

, but not so much for

, so stick with presses (

Also, to optimize strength gains, strength training for triceps and anterior deltoids (synergists of the bench press movement) should be incorporated, as well. Pressing movements are great for these muscle groups: shoulder presses for delts (Arnold presses if you really want to hit the front delts) and weighted dips for triceps. 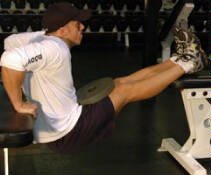 (resisting a weight higher than your 1 RM on the way down with a partner helping you push it up) are awesome for strength building since you can resist more weight than you can push. Also implement rest-pauses; a technique that allows you to lift a weight for more repetitions because of a short (10-20 second) rest period at the end of a set before attempting to crank out one or two more reps.

One technique that I used when working on my bench was working through only the top half of the movement (the strongest part of the press). I did it on a power rack, making sure to pause with the barbell resting on the rack at the bottom, so as not to use momentum. It helped - trust me.

Remember to warm-up before each of these workouts! Heavy weights are tough on your joints - an injury is a likely possibility. Hop on a cardio machine for 5-10 minutes before your workout, and complete 2-4 warm-up sets for your first exercise.

Who Should Avoid This Type Of Workout?

People who would be better off steering clear of extremely heavy training:

Why Is The Bench Press More Commonly Associated With Strength?

The reason that the bench press is the most frequently used, talked about, and widely known is because of its incredible potential for building both muscle and strength. Comparable lifts such as the squat and deadlift are ignored in favor of the bench press because the latter is much more appealing to the average Joe compared to the difficulty of the former two exercises. Deadlifts and squats are painful. Additionally, the risk of injury is less with the bench because not as many muscles are involved as synergists.

Workout of the Week is where forum members are asked to answer questions about what they think the best workouts are.