The Myth Of The Bench Press: Part I

The most common asked question in most weight training circles is, how much can you bench? Learn why you often hear answers of exaggeration.

The most common asked question in most weight training circles is, "How much can you bench?"

You will often hear the question answered with astounding totals that are often an exaggeration of the individual's hope rather than reality. You have to wonder why the lay public is so misinformed and why so many accolades go to these horizontal wannabies. Believe it or not, such ignorance is more prevalent than one might think, and it has even permeated through our school system.

I know of a high school coach who does not allow squats! "They are dangerous," he says, bad for your back and knees." And the sad part is that his narrow minded philosophy has passed down to some of his students, where their main strength training protocol is centered on just two exercises: the bench press and curl.

Now, don't get me wrong. I appreciate a good honest bench press (BP) as much as anyone, but if that is all that guy or gal is good at, then they are a far cry from being a complete strength athlete. The purpose of this article is to set the record straight about this highly overrated movement, as I like to call it, the "horizontal champ's special". And to prioritize a more balanced diet of proper strength movements for the strength athlete's training protocol.

The bench press, which evolved from the horizontal floor press, started to come into prominence in the late 40's and 50's. This was due to a renewed interest in bodybuilding, which took off right after the Second World War. Bodybuilders popularized this movement because of the type of developments that resulted. The deep wide chest plus the increased arm girths quickly caught on as the type of physical development that most males wanted to have.

Also bench presses were considered an easy exercise to do. After all, what could be better than to do your exercises lying down? On top of that, more weight could be used. The lying down part caused many early iron game purists from competitive ranks to call the bench press a lazy man's exercise. However in a few years, it was found that the bench press did have some value as an assistance exercise for the competitive standing Olympic press.

I added this lift as an assistance exercise for my standing press, and I believe this movement contributed to my getting an official 315-pound standing press in competition. However, except for the time when I was powerlifting, I only considered the BP as a minor part of my training schedule. I only did BP's for three to six reps with what I was planning to do on a standing press, and always with the same grip as my standing press.

However, on the negative side, BP's compromised my shoulder suppleness for snatches. So I, like many other Olympic lifters, did them sparingly, and after the press was dropped in 1972, I did them even less frequently.

There was one statement about vertical and horizontal pressing that I do not agree with. That is, if a person can overhead press 300 pounds, then he can automatically bench press 400 pounds.

I believe that if a lifter can overhead press 300 pounds he must do some bench presses to get to that 400-pound level. This can be achieved with a variety of assist exercises, such as dumbbell presses. However doing just overhead presses with no bench presses at all will not automatically make you a great bench presser.

To further confuse the picture I'm creating I must mention another comparison in relation to vertical and horizontal pressing. During my early years as a powerlifter, I had a friend who had a legitimate 500-pound bench press. This means with no support gear, and with a one or two second pause at the chest. However, believe it or not I could actually out press my friend in the standing press.

How could this be, you might ask? He was benching 500 lbs and I was benching 400 lbs. There are certain reasons why some can bench press huge weights and others can't. And believe it or not, none of these reasons for being able to do a big bench equates to "true functional strength". Other than physical impairments, the main reason some are better benchers is simply leverage. Some just have a shorter distance to press the weight.

Also there is "bridging", which is where a person arches their back, thrusting their chest upwards to a higher position. When this is done correctly, the only parts of the lifter's body that touches the bench are his butt and the upper part of his back near the base of the neck. An effective solid bridge can in some cases raise the lifter's chest up three or four inches, and an advantage like this can add a significant amount of weight to a limit BP. 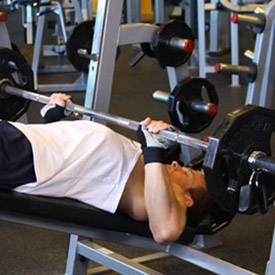 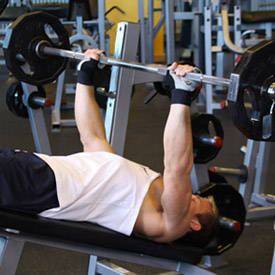 To bridge effectively, one must have a long spine that can bend in a long, gentle sweep. A shorter spine can't do this, thus the lifter will have to lie flatter on the bench, which would be a big reason to admire a big bench from a person with such a leverage disadvantage. If your spine is not long enough to where you can get into that long gentle hyper-extensive bend, and if your arms are longer, then you will automatically have to push the weight farther, there is little that can be done to alleviate this.

About the only thing that you might be able to do to shorten the bench-pressing distance would be rib cage expanding exercises like breathing squats(*) superset with pull-overs. Thus, if the rib cage elevates higher, the bar will start closer to the finish position.

What are breathing squats? One set of 15-20 reps with several deep breaths in between every rep. Use the normal weight that you use at 10 reps.

Now aside from raising the chest up several inches, there is another reason why bridging is such a big advantage in bench pressing. As the chest position elevates higher, the arms get put into a compromised position if the bench presser is not in an ideal position to start a bench press; more precisely, the humerus of each arm will move up to a parallel position with the floor, and the lifter will then be able to utilize more muscles simultaneously more efficiently. In short the delts, triceps, and the lats can work better in unison.

On the other hand, if a lifter has long arms and a short trunk, they will not be able to get in as good a starting position. If you want to prove this to yourself, just lay a four-inch board on your chest while benching. With the board on top of your chest, the humerus of each arm will raise up to a parallel position with the floor. This will then allow you to utilize your triceps more advantageously.

This will also tell you if your triceps are weak. It is very important when bench pressing to strengthen your triceps to their highest-level possible. This is particularly true if a lifter is wearing one of those recoil contraptions that helps push the bar back up. Also, it should be noted that such garments do not prevent injuries!

Now after describing the advantages some people can use while bench-pressing, if they have that god given leverage, it is very easy to understand why this movement is so popular with certain people. However, if BP's are the only main compound exercises one uses in his weight training, then one can never call himself a complete strength athlete. This is particularly true if the bench presser is only moving the weight about eight to ten inches.

Some have done so much horizontal work in their weight training life that they do not have the proper development to lift in upright position. In fact they even develop rotator cuff problems because the muscles in the shoulders developed an imbalance. After six such procedures on my own shoulders I now consider myself a self-proclaimed "expert" in this area.

Shoulder muscle imbalances can lead to chronic shoulder problems. The facts are bench press related problems and rotator cuff surgeries are at an all time high. And this is ironic, because we never had these kinds of problems in the 70's when we had the standing press in Olympic lifting.

Aside from the bench press being injurious to the shoulders, it can have a detrimental effect on the shoulder girdle flexibility. I know for as I have stated it was definitely the case with my own lifting, and I don't believe I'm alone with this condition! Tight shoulders cannot only affect Olympic lifters but athletes in other sports as well.