The Myth Of The Bench Press: Part II

Bench pressing, on its own accord, cannot stand as a main staple athletic weight training exercise. Learn why here!

You might ask how specifically does too much bench pressing have a detrimental effect on the shoulders. This can be described two ways. First, when a person has a short trunk and long arms, they cannot bridge as effectively. This in turn puts that long-armed, short trunked person in a position where the humerus of his arms starts lower. In fact at the start of the bench press, his elbows will probably be below the plane of the bench, and this type of bench presser is at a distinct disadvantage when it comes to starting the lift. 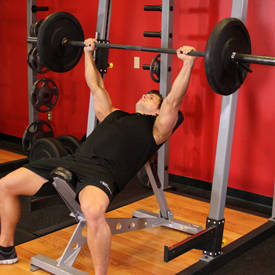 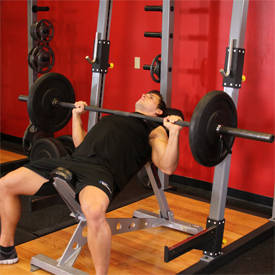 This creates an imbalance that puts an uneven tension of the shoulder joints; such an imbalance could impede a lifter's ability to perform a solid overhead lifting position.

Conversely, the short-armed person with the better bench press leverage will not get the same tightness in his anterior deltoids, but over the long haul he will develop shorter muscle fibers from doing such limited range of motion.

At first glance it would appear that the short-armed high-bridged bench pressers have shoulder inflexibility for the same reason as the long armed person. This is not generally true, and I've proven this when I have coached new Olympic lifting trainees who've previously done a lot of powerlifting.

Generally, I've found that that short armed people who have excelled in the bench press for many years can never adjust to the rigors of Olympic lifting, simply because they can never seem to achieve enough flexibility to obtain the proper positions under the bar.

Conversely, I have had some limited success as an Olympic lifting coach, with former powerlifters who are long-armed and who did not do particularly well in the bench press. And a lot of this came down to the way a certain part of a muscle is developed, namely the "long head of the triceps".

If this muscle is not stretched regularly, it will become shorter than it should be in length, and the result will be that it will be very difficult, if not impossible to raise your arms straight over your head. In short, this is the biggest reason for all the horizontal champs out here to get off oaf their backs and devote some time to training with overhead movements!

Fact And Fiction About Strength Training

Bench pressing, on its own accord, cannot stand as a main staple athletic weight training exercise. In fact there are no sports of any consequences where athletes excel in their sport lying flat on their backs. Wrestling is the only one that might come to mind, and even then, if the wrestler is flat on his back he is in big trouble!

Players in the trenches on the line of scrimmage must first start with a strong and stable three point stance. This must then transfer to a solid free-standing position as they face their opponents across from them on the field. And the only way that a big BP could equate directly to such a position's strength is if there was a vertical and stationary pole or wall on the field so that the player could brace his back against it while pushing out away from his body.

However, I have never seen such a luxury on any football field. The fact is, any player, whether they be a lineman or any position, better have a strong foundation of superior legs and back strength in a free standing position, otherwise he will be looking up to the sky most of the day.

So, if you want to equate that foundation of strong legs and back, then squatting and power cleans would be the best barbell movements to train on, not the bench press.

The New Wave In Strength Training

In the past few years the new strength sport of strongman contest has really caught on in the USA. To add to this has come a not so new but primitive form of strength training. Some of the wiser strength coaches in colleges have caught onto the value of this, and are now using it in their programs. 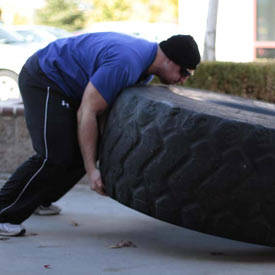 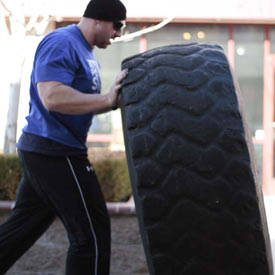 All of the top athletes in the strong man contests not only train with barbells and dumbbells, but also with old implements that directly equate to their events, like stones, logs, nautical chains truck tires, etc.

None of these events are done on their backs. These events relate to heavy hard labor-type work which, for the most part, is all done standing on your two feet. In short, this is the "real world". So what's the point in doing your strength training exercises lying and sitting down? If you want true functional strength that transfers to every day activities, do as much as you can while standing and holding the weights in your own two hands.