The remainder of this article will explain exactly how the endocrine system functions, and how exercise can positively effect this functioning. Key hormones, and respective endocrine glands, that are both affected by exercise and responsible...

Many health benefits are to be gained through bodybuilding. In fact, bodybuilding's training regimes and dietary practices can enhance cardiovascular, mental and immune health and improve weight loss. One aspect of health that is not often touched on, when bodybuilding's benefits are discussed, is the endocrine (or hormonal) system.

The endocrine system (from the Greek terms "endo" meaning within and "krine" meaning to separate or secrete) is comprised of chemical substances called hormones which serve as messengers, passing information from endocrine gland to organ, to control a large number of physiologic functions. To ensure these functions are governed efficiently, effective hormonal control is of paramount importance.

Exercise is one of the best ways to beneficially assist the release and reception of hormones. Studies have shown that exercise actually increases the amount of circulating hormones in our bodies as well as strengthening the receptor sites on their target organ cells.

The remainder of this article will explain exactly how the endocrine system functions, and how exercise can positively effect this functioning. Key hormones, and respective endocrine glands, that are both affected by exercise and responsible for bodybuilding success will be discussed.

The endocrine systems glands manufacture and secrete hormones, which communicate with specific organs and, in concert with the nervous and immune systems, enable vital functions to occur within our bodies. The endocrine glands are ductless, which means they secrete the hormones they manufacture directly into the bloodstream to be taken to the appropriate target organ, upon which these hormones act.

Specific cells on the target organ which act as binding sites (hormone receptors) recognize the shape of each hormone and allow it to enter (a lock and key mechanism).

Hormones bring their characteristic effects on target cells by modifying cellular activity, and given that they are very potent substances, hormones need to be tightly regulated to maintain homeostasis.

The Major Endocrine Glands Are:

Organs that are hormonally active as part of their function, but are not endocrine glands per se, are:

Although the endocrine glands are scattered throughout the body, and serve different functions, they are considered a system because they have similar mechanisms of influence and functions, and many important relationships.

The Three General Classes Of Hormones Classified By Their Protein or Steroid Chemical Structure Are:

* It is interesting to note that, in fact, all of the hormones in our body are derivatives of proteins or proteins themselves, except for the those in the adrenal cortex and the sex hormones, which are steroid hormones. Steroid hormones typically react with receptor sites inside a cell because the process is slower as protein synthesis is required, whereas protein hormones react with receptors on the surface of a cell in a more rapid fashion.

Both males and females produce testosterone, which is a key bodybuilding hormone, as it increases basal metabolic rate, decreases body fat, increases feelings of self-confidence, and maintains muscle volume, tone and strength. In fact, testosterone, along with growth hormone, is responsible for the hypertrophy (increased size and density) of muscle cells as well as the repair of micro-tears in the muscle tissue.

Females have only about one tenth of the testosterone males have, but even at that level, powerful effects are exerted: libido and strength of orgasm for example. The process underlying testosterones release is rather complex.

Firstly, the hypothalamus (situated in the brain), releases gonadotrophin releasing hormone to the anterior pituitary gland, which, in turn, releases luteinizing hormone, which travels to the Leydig cells of the testes and stimulates the enzymatic conversion of cholesterol to Testosterone. 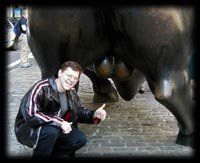 The key to boosting testosterone levels through exercise is to concentrate on the larger muscle groups while avoiding training the same body-part two days in a row.

It has also been shown that a higher level of training intensity can be achieved in the morning as it is then that testosterone levels are at their highest. Consequently, greater gains could theoretically be made at this time.

Repetitions should be kept low, while a correspondingly heavy weight is lifted, if testosterone boosting is ones aim. 85% of ones one-repetition-maximum for 1-2 reps is best.

In essence, the best form of training for testosterone increase is short, intense, anaerobic session. With aerobic training, shorter, 45-minute sessions are ideal as testosterone is depressed is this period is exceeded.

Growth hormone which is released from the brains pituitary gland is an important bodybuilding hormone. It stimulates protein synthesis, and helps to strengthen bones, ligaments, tendons and cartilage. It also plays a role in fat mobilization, and the corresponding decrease in carbohydrate usage, during exercise.

As a result, body fat is used and blood glucose levels are balanced which allows one to train over a longer period of time (without exceeding the testosterone maximizing 45-minute period of course).

Increases in growth hormone provide a multitude of immediate benefits which include, increased energy, ability to concentrate, and interest and ability in sex (Kennedy, 2004). Longer-term benefits include, increased aerobic capacity and strength, thickening of hair, tightening of wrinkles and loose skin, decrease in visceral fat, and strengthening of osteoporotic bones (Kennedy, 2004).

Growth hormone production is reduced significantly as we age and can be prescribed to offset the negative effects of aging. However, without going to extremes, one can increase their output of growth hormone in the most effective natural way possible: though exercise.

For increased growth hormone the most productive form of exercise is vigorous, sustained anaerobic training. Adopt the same strategy as when training for testosterone release and, target the large muscle groups, the quads in particular. Train no longer than 30 minutes when specifically aiming to increase growth hormone.

This applies to aerobic training also, which should be undertaken at a very high intensity; bordering on anaerobic. Interval training is the ideal.

The beneficial effects of estrogen, in its most biologically active form, 17 beta estradiol, include, fat mobilisation for fuel, mood elevation, increased basal metabolic rate, and libido in women primarily. As a woman ages her estrogen levels vary to regulate the reproductive system and are reduced significantly by the time she reaches menopause.

A study by Copeland, Consitt and Tremblay, reported that blood levels of estrogen, were significantly higher in women aged 19-69 years old after 40 minutes of either endurance or resistance exercise versus a control group who performed no exercise. Furthermore, blood levels of estrogen remain elevated for up to four-hours following an exercise session.

This hormone is produced by the follicular cells of the thyroid gland and its main role is to raise the body's metabolic rate. It is therefore a key hormone for weight-loss, as more calories are expended through its release. Thyroxine has an additional effect of influencing physical development.

Thyroxine increases in the blood by about 30% during exercise and remains elevated for up to five hours afterward. The intensity should be kept high to realise maximum benefit. Thyroxine levels at rest are also increased through exercise.

Produced in the adrenal medulla, epinephrine, a neurotransmitter of the sympathetic nervous system, increases the amount of blood the heart pumps and directs the blood to where it is needed - the extremities. Epinephrine is one of the catecholamines, the other being norepinephrine, and both are synthesised from the amino acid tyrosine.

Epinephrine also stimulates the breakdown of glycogen in the liver and muscles and stored fat to be used as fuel. Vasodilation in muscle and liver vasculatures results also from increased epinephrine release. This allows the muscle to receive more oxygenated blood, increasing our ability to use these muscles while exercising.

To increase epinephrine exercise sessions, once again, need to be very intense. The amount of epinephrine released from the medulla is proportional to exercise intensity.

Insulin, produced in the islet cells of the pancreas, is an important hormone which decreases (regulates) blood levels of glucose and directs amino acids and fatty acids into cells.

Most of our body's cells have insulin receptors, which are composed of two alpha subunits and two beta subunits linked by disulfide bonds, and bind the circulating insulin. The cell then can activate other receptors which are designed to absorb glucose (sugar) from the blood stream into the cell.

Note: This is an excert from an Author L. Rea article.

An insulin response ensues after a meal has been consumed. An excessive insulin response causes fat to accumulate within cells, and, over time, those who frequently experience such responses can become overweight and their cells may develop a resistance to insulin (diabetes).

Weight loss through daily aerobic and weight-training can help to rectify this situation, depending on the type of diabetes they have. One may be fortunate to escape diabetes, but they will likely become overweight with continual, excessive insulin responses.

Therefore, it is important to exercise to help offset any potential blood sugar problems. Blood-insulin levels begin to decrease within ten minutes of aerobic training and continue to decrease as the session progresses. Weight training has been shown to increase the cells sensitivity (receptivity) to insulin at rest.

Released from the pituitary gland, the endorphins are an endogenous opioid class of chemicals produced under conditions of pain, which block this pain, decrease appetite, create a feeling of euphoria and reduce tension and anxiety. Biochemically, endorphins are polypeptide neurotransmitters, containing 30 amino acid units.

Exercising is particularly beneficial in terms of endorphin release. In fact blood levels of endorphins increase above resiting levels up to five times with longer duration (over 30 minutes) aerobic exercise at moderate to intense levels. An increased sensitivity to endorphins is developed after several months of regular exercise.

This means that a higher high will arise from the same training stimulus. Although longer duration exercise is suggested as a rule, it is rather arbitrary, as individual variability dictates how one will experience the effect of endorphins.

As with insulin, glucagon, a linear peptide of 29 amino acids, is secreted by the pancreas. Its main role, in contradiction to insulin however, is to increase blood glucose levels. Glucagon is synthesized as proglucagon and proteolytically (the hydrolysis of proteins into simpler compounds through the actions of enzymes) processed to yield glucagon within alpha cells of the pancreatic islets.

Researchers Bonjorn, Latour, Belanger and Lavoie, from Montreal University, found that exercise enhanced the livers sensitivity to glucagon. This demonstrates the effect exercise, and its facilitation of glucagon, has on nutritional conversion for energy purposes. Glucagon is typically secreted about 30 minutes into an exercise session, at the onset of blood glucose reduction.

As demonstrated in this article, hormones, and their multifarious complex interactions, underpin many of our most important biological functions. These fascinating molecules go about their job in relative obscurity, while we conduct out daily affairs, completely dependant on their respective roles.

Indeed, the efficient functioning of our endocrine system is very important, and through exercising diligently we can play a role in its upkeep.