When hard times and trials confront us, we adapt and overcome. Brooke Erickson uses bodybuilding to defeat adversity and stand triumphant on the stage.

Each season the International Federation of Bodybuilders holds contests across the globe to determine who will join the ranks of the world's greatest physique athletes.

One of the newest additions to the IFBB Pro Figure division is Brooke Erickson, a trainer and model from Meridian, Idaho. She earned her pro card in 2011 at the NPC Team Universe competition. Her look is an amalgamation of muscle and curve, a feminine form with shoulders cut from stone.

Brooke is ready to take the pro stage. She has an inherent drive to take things to extremes, which pushes her in the weight room. Before she knew how to harness her energies into the sport of fitness, her tendency to reach for extremes put her health, and that of her children, at high risk.

When hard times and trials confront us, we adapt and overcome. Brooke Erickson uses supplementation to defeat nutritional deficits and beat her tough past.

When hard times and trials confront us, we adapt and overcome. Brooke Erickson uses nutrition to ward off her greatest enemy: anorexia. See how she eats for performance.

Erickson uses bodybuilding as a weapon against adversity. She carves her physique with iron and might. See how the weight room saved her life.

In this complex world, fitness aspirants face recurring obstacles. It's often as simple as a belly bulge that goes away only to return, or a muscular imbalance you just can't seem to correct.

Then there are pillars of strength, like Brooke Erickson, who stood up to complex physical and psychological deterrents that threatened her life. This proud mother survived gigantic weight swings. She reached 180 pounds during a pregnancy, and later starved herself to a paltry 89 pounds. The new IFBB pro spent 10 years gaining baby weight, then ruthlessly depriving her body to lose it.

Brooke, like millions of young women and men, suffered from anorexia.

"I was completely lost on how to lose weight, because when you have an eating disorder, such as anorexia, you pretty much don't eat," Erickson said. "You just starve yourself, so you don't really need to exercise." 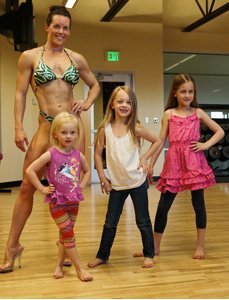 She started training at home, with her newborn in a swing. Within a year and a half, she patiently lost the 80 pounds from her first pregnancy, but that was just the first revolution of her weight roller coaster. Her second pregnancy ended in stillbirth. The loss of a child traumatizes. It took Brooke back down a road she thought she'd never walk again.

"That sent me into a little bit of depression," Erickson said. "And I went back to my old way. I got really small again."

Pregnancy forced Brooke to change again. She was afraid to lose another child, so she was very careful, gained only 18 pounds and gave birth to a healthy baby girl. But, she was caught in an eating disorder cycle. She lost the baby weight in just one week, through harmful, unhealthy methods.

Brooke's cycles and her battles with anorexia began to buffer her pregnancies. After each birth, she'd fall back into her old haunts. After her third child was born, her whole life began to crumble.

"I had only gained about 19 pounds with her," Erickson said. "After she was born, that's when the economy changed and everything hit. My husband was struggling. We had to sell our home and do a lot of things just to survive. Again, that was my way with dealing with problems. I just didn't eat."

Brooke failed to feed her body, failed to fuel her muscles, failed to be a healthy mother. She dropped down to 89 pounds.

Brooke's husband, Ross Erickson, came home one day in 2009 with a magazine, a figure model on the cover. He knew she was struggling, that she was unhappy.

"He suggested that I try to do something like that, to gear my energy into something positive. I kind of had an 'ah-ha' moment when I was in the living room, rocking my very colicky baby, with my two daughters sitting on the couch. They were watching me, and I just started crying. I knew I needed to make a change."

That was December 2009. Brooke hired a trainer [Mike Hildebrandt], even though money was tight in their household. She asked Mike to, "help me get to that point in my life, where I could look in the mirror and be happy with whom I am." 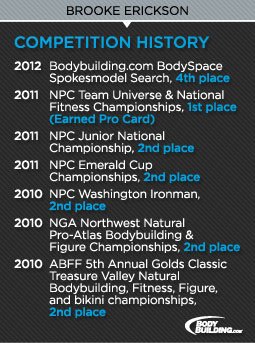 "I freaked out at first when I saw the amount of food I was supposed to be eating," Brooke said. "My goal initially was just to gain five pounds, just to get on a scale and have it say 105 pounds. And I did it. I got to 105 pounds and I did my first show. I will never forget how nervous I was, but I will never forget walking off stage and feeling like I had found myself."

Brooke's determination finally found a healthy release. The eating disorder isn't completely gone. You can look at her body now and scoff at the idea that she was ever scrawny, but it's where she came from.

She joins the ranks of heroic bodybuilders who are recovery cases, everyday people who hit rock bottom, then rise to their feet to stand on stage. Brooke is an ambassador of fitness. She can be the source of inspiration for sufferers of these debilitating disorders. Brooke has shown that a person can be stronger than their pain, that she can be stronger than her fear.

Q
You have dealt with anorexia for years. Do you ever fear you will relapse? What stops you? Have you dealt it a final blow? How would you encourage others who suffer similarly?

I don't fear relapsing, only because I have developed a good relationship with my body and I understand what food does for me. I will be honest: When my dad died, only two weeks ago (4/5/12), I immediately felt my defense mechanism kick in and I didn't eat for 24 hours.

However, because of how far I have come and how much I have learned, I realized that was not the answer to my problem and, instead of caving into my old "coping" habit, I did the opposite: I ate even when I didn't want to because I understand that food is fuel for my body.

In a sense, overcoming my eating disorder had made dealing with other problems in my life a little easier simply because I am a stronger person on the inside.

I guess that means I have given it a final blow.

I encourage others who suffer from any type of self-destructive eating habit to believe in their own strength. Most people use anorexia as a form of control, but really it's a sickness that controls them and when they finally see that, there is a freedom that occurs between the mind and the body.

I wish I could say quit looking at the scale or stop staring at the reflection in the mirror, but it's not that easy. Healing will only occur when the value of "really" being in control is recognized and appreciated.

If you have any questions about diet tips, training or nutrition, you can find me on BodySpace, username SuPErBe. For anything else you need, check it out at Bodybuilding.com.