For as long as Ethan Still could remember, he was overweight. Working since a young age to help support his single-parent household and not having the chance to stay active, Still turned to food for comfort.

By the time he was 21, Still weighed almost 500 pounds. Then, a near-death event opened his eyes to just how dire his situation was.

After undergoing surgery and redefining his relationship with food, Still lost over half his body weight and shattered expectations when he stepped onstage. We sat down with Still to learn more about his story, why he believes there's no such thing as failure, and how he was able to make this life-changing transformation.

BBCOM: Can you tell us how you ended up gaining so much weight so young?

Ethan Still: I've been big as long as I can remember. I come from a big family. It was just kind of normal. Nobody ever questioned it.

I got into powerlifting in seventh and eighth grade. I was playing football and because of my size, I just automatically was able to lift more than most people. I finally felt like I was good at something.

Then, my junior year, I quit athletics. I had to get a job. My mom was a single mom raising three kids, and when I turned 16, I could finally get a real job to help her. I never turned down a chance to work overtime, so I didn't have a lot of free time. It made it really easy to make excuses for not working out.

By the time I graduated I had gotten really, really big. At the peak I was 476 pounds. I don't even know if that was my actual heaviest or not, that was just the heaviest I saw on the scale.

What motivated you to make a change?

I was driving to my mom's house one night, and I was just depressed as could be. Suddenly, this semi pulled out in front of me. I was doing like 75, 80 miles an hour, and I watched it in my head—me slamming into this truck and killing myself. It took everything in me to slow down.

Thankfully, I did hit the brakes. I pulled over, shaking and crying. I got to my mom's a little bit later and just broke down. I told her I can't do this, I've got to change. I was seconds away from killing myself, and that's not where I want to be. I was almost 500 pounds and only 21. Either I was going to end up killing myself purposely, or my weight would kill me by the time I was 30.

What were some of the first steps you took to lose the weight?

I got a gym membership the next week and started working out. I also scheduled a consultation for the gastric sleeve.

The doctor told me I'd be a good candidate since I had athletic experience. Two months later, I got a letter in the mail saying it was approved. I started working with a nutritionist and ended up losing about 20 pounds a month. I lost 100 pounds.

I did end up having the surgery. With that surgery, most people don't understand what is required. It is really about learning to have a healthy relationship with food, relearning to eat for fuel. Food is meant to keep you going and to help you excel—it's not meant to be a comfort tool. I learned healthier habits and kept losing weight.

At what point did you decide to compete?

I got to a point where I was sitting around 280 pounds but I hadn't worked out in forever. If you saw me, you would think I was just some random overweight guy. I thought to myself, "I've lost 200 pounds, but what am I doing with it?"

I started posting my story to see if I could inspire other people. I met my coach on Instagram; he sent me a video of the Summer Shred Classic. It's a bodybuilding competition held every summer, and they had a transformation class.

There were people who had battled anorexia, bulimia. There were combat veterans, amputees. One lady had survived cancer. It was full of people who found hope in strength and fitness.

I started training in October of 2018, and by June of 2019, I was 230 pounds and 7.2 percent body fat. It was the proudest and the happiest I've ever been. It was just surreal to be up there on stage. I had tears running down my face with all the fake tan. I felt like an entirely different person.

What was it like to step onstage after losing more than half your body weight?

People there treated me like a celebrity, asking me if I could take pictures with them. Having people tell me that my story inspired them was absolutely incredible.

I do plan on competing more. I'd like to have surgery to remove the loose skin at some point, to stand up there and actually have a shot next to the normal guys in classic physique.

There's something about the art and the symmetry of bodybuilding and the posing—it's just beautiful. It's something I'd always wanted to be a part of even back when I was 500 pounds. Bodybuilding opened up an entirely new world of what is possible. It's changed my views and beliefs of the world for sure.

What would you say to someone just starting their weight-loss journey?

I learned that there's no such thing as failure. There is no goal or dream or vision for your life that is impossible. Everything to this point has played some part in helping me realizing who I am and what I'm capable of doing.

I think what we call failure is just a lesson. Some lessons are hard, but life is worth it. It's absolutely worth it, so do not give up. You're never defined to your current situation. 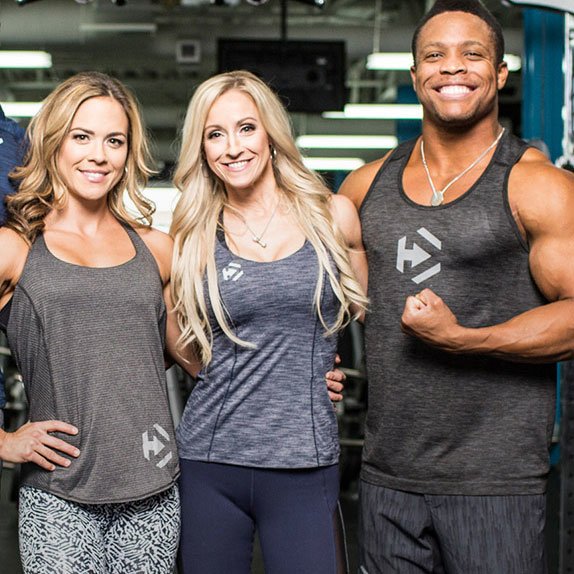 Transform in Just 12 Weeks
If you're ready to get in shape but not sure where to start, this program is for you. This complete transformation journey covers every angle of fitness, from exercise to nutrition to supplements, so you can learn healthy habits for life.