It's time to stretch a few of those new T-shirts you just unwrapped over the holidays!

Finishing your chest workout with a single-joint move—be it a dumbbell fly, cable crossovers, or the pec deck machine—is a by-the-textbook way to flush your pecs with blood for a growth-inducing pump before calling it quits. After all, your multijoint bench presses from various angles are the best mass-builders, so single-joint movements should be left for the end of your workout.

You can finish off your chest with dumbbells, machines, or cables, but one benefit cables offer is how easily you can change the angle of pull, forcing your pecs to work at novel angles. When you combine a cable movement with a triset technique similar to 21s for biceps, you'll discover a rather unique finishing move that'll pump your pecs to new levels—and hopefully stretch a few of those new T-shirts you just unwrapped over the holidays!

The Angle On Cables

Being a front-line writer and editor in this industry for nearly two decades, I've come across a number of amateur and pro bodybuilders who are oftentimes eager to share new ideas with me. (I'm likewise eager to share them with you, though I can't take credit here for their origination.) Here's one I learned from three-time Mr. Puerto Rico Mauricio Solis at a photo shoot.

This brutal finisher is done on the cable crossover apparatus. You might like finishing your chest workouts with dumbbells or on an adjustable machine, but I suggest sticking with cables for the following reasons:

In sum, cables allow you to hit the chest musculature from different angles in very different ways than you can with, say, the pec deck machine. Here's how we can use the cable crossover's unique advantages to create a monster finishing move that'll hit your pecs with a single-joint move from all new directions.

When doing fly or cable crossover movements, it's imperative that you lock a slight bend in your elbows to isolate the pecs. If you start with a 90-degree bend in your elbows and your arms are fully extended at the end of the range of motion, you'll turn a single-joint move into a press, defeating the purpose. The degree of bend in your elbows must be the same at the bottom of the move as it is at the top.

Three Angles In One Set

This triset consists of doing seven reps apiece with three different angles for a total of 21 reps. Choose a weight than you can do for about eight reps. You won't change the weights or the pulley positions between sets, just your body position (which affects the angle of pull). This keeps rest time between segments to a minimum. The high-rep total will drive blood into your pecs, allowing you to finish your chest workout with a superior muscle-building pump. 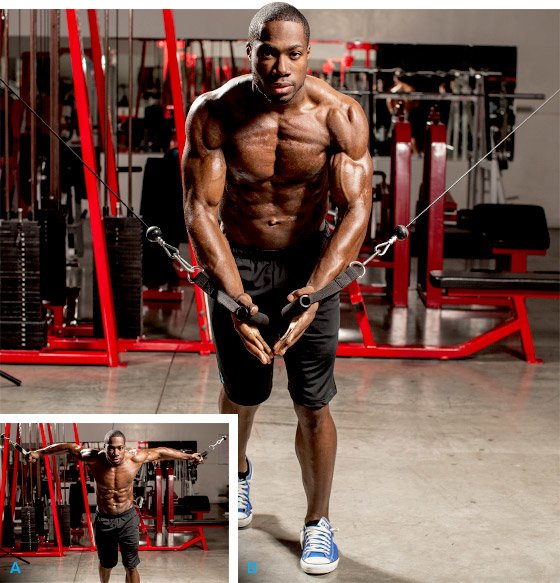 This is just one example of three different variations of crossovers you can combine in a triset. You can easily come up with others, so feel free to experiment with pulley placement, finish position, and body position in front of the midline of the cable apparatus to change the angles of pull and areas of emphasis.

Moreover, don't restrict yourself to traditional rep ranges. Try pairing multiple angles and rep ranges into supersets or trisets, or even do dropsets. You can not only juice up your training for a monster pump, but add some much-needed variety to challenge your mind and body.

Give this training technique a shot at the end of your next chest workout, and let us know how it goes in the comments below! Feel free to share your tweaks and favorite chest finishing moves, as well.

Building Athletes
From The Inside Out

Chest Workout Technique: Get A Monster Pump With Negative Dips

Dips may not seem like a brutal way to finish off your chest workout, but when done with negatives, you'll find that slowing down each rep can speed up your gains.

3 Keys To A Monster Bench Press

For many gym goers, the bench press is the most basic measure of a lifter's strength. Here's how to fast-track your bench press gains in just 2 months!

Finish your shoulder routine with this giant set that will ignite your delts, deliver a monster pump, and send your muscle growth into high gear.