Chest Workout Technique: Get A Monster Pump With Negative Dips

Dips may not seem like a brutal way to finish off your chest workout, but when done with negatives, you'll find that slowing down each rep can speed up your gains.

You know you've had a great workout when you can't lift a weight even one more time. That's called concentric (positive) muscle failure. But while some may use positive muscle failure as a marker of success, that doesn't mean you're so fatigued you still can't lower that same weight under control. In fact, training with negatives—in which you lower a weight very slowly rather than lift it—has been proven to elicit gains in size and strength above and beyond what positive-rep training can do.

Training with negatives may be something you've tried in the past, most likely at the end of a set when your partner raises the weight and you slowly lower it. The fact is, you're typically stronger on the negative: It's easier to control the lowering of a heavy weight than it is to lift it.

A well-constructed chest workout includes presses and flyes from a variety of angles that target the different areas of your pecs: upper, middle, lower, inner, and outer. Clearly, what you do at the beginning of your workout, when your strength levels are high, goes a long way toward determining your eventual success in bringing up your pecs. But it's what you do at the end of your session that determines whether you generate the kind of mind-blowing pump that separates one workout above all the rest. 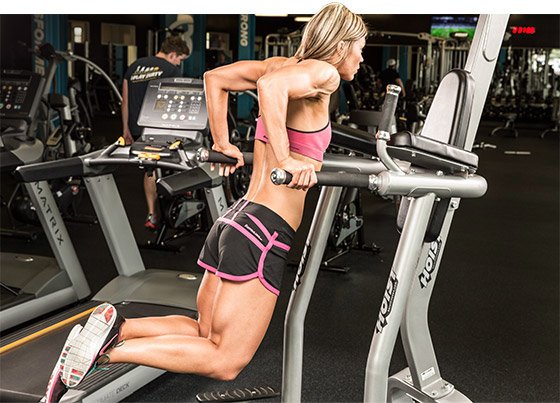 It's what you do at the end of your session that determines whether you generate the kind of mind-blowing pump that separates one workout above all the rest.

Here's a chest-day finisher that's guaranteed to make those deep fibers burn. The exercise of choice—the bodyweight dip—is a fairly innocuous one that's commonly done to target the lower pecs. For most bodybuilders, in fact, it's quite easy. Which is why you'll be doing it last in your chest workout; by then, your pecs will be highly fatigued.

The focus here is completely on the negative—you won't be doing a single positive rep. But the kicker is that you'll be taking a full 10 seconds—not a fast count—to lower yourself from the arms-extended position to the bottom. Of course, taking 10 seconds to complete the negative is much harder than what you normally do on dips, which is simply lower yourself under control.

ANATOMY OF A REP

To ensure that you do only negatives, after you lower yourself, put your foot on the footplate and use your legs to hop back up to the top position. Do not press through your pecs to go back up, because the intention of this technique is to focus just on the negative.

Do as many reps as you can in this manner, taking 10 seconds to lower yourself on each and every rep. By the sixth or seventh rep, you'll find it increasingly difficult to control your rate of descent, but it's important to slow yourself down as best you can. Continue with as many reps as possible.

End your set when you can no longer hold the negative for more than 4-5 seconds. Repeat two more times after a brief rest period and you'll see how negatives can bring about positive growth!

Here are some tips to get more out of negative dips: 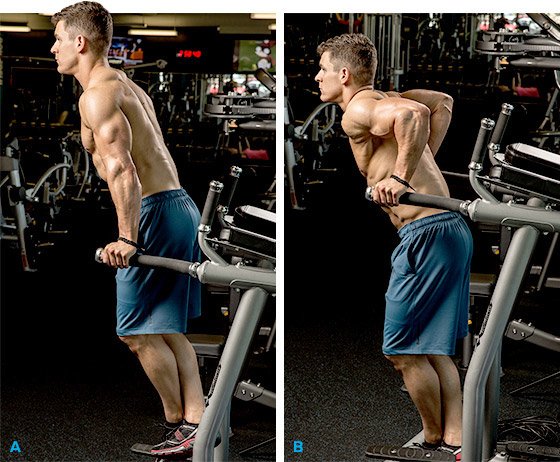 Stately shoulders are the key to any well-rounded physique. Build sculpted shoulders with this workout from IFBB bikini pro Brittany Tacy.

Too often, metabolic circuits are little more than a mess of randomly paired movements. Here's the formula for a precise fat-loss workout!