Stick Your Neck Out With Larger Neck & Trap Muscles!

Sick of wearing turtle-necks because you have a tiny neck? Well stop being a pencil-neck and do something about it. Learn everything about the neck, different neck exercises, and what the forum members are saying. Learn more...

Sick of wearing turtle-necks because you have a tiny neck? Well stop being a pencil-neck and do something about it. By working the neck and trap muscles, you will be on your way to a thicker, more muscular neck.

First things first... Let's first learn a little bit about the muscles we are talking about.

What Are The Muscles Of The Neck?

Where Are The Neck Muscles Located?

The longus capitis is thick at the top and narrows as it descends. It is found on the anterior tubercles of the transverse processes of the 3rd, 4th, 5th, 6th cervical vertebrae. The longus capitis then inserts on the inferior surface of the basilar part of the occipital bone.

The infra hyoids are depressor muscles of the larynx.

The splenius capitis is found from the spinous processes of the upper three or four thoracic vertebrae and also from the ligamentum nuchae from seventh cervical vertebra. It then travels upward and is inserted into the mastoid process and also into the superior nuchal line.

The trapezius is the large muscle of the upper back. It is found on the medial part of the superior nuchal line, ligament nuchae, spinous processes and supraspinous ligaments to T12 and is inserted on the lower to medial acromion and superior spine of scapula to the deltoid tubercle.

The levator scapula is found on the posterior tubercles of the transverse processes of C1-4 and is inserted on the upper part of the medial border of the scapula.

The scalenes are found from the lateral processes of the cervical vertebrae of C3 to C7 and insert onto the 1st and 2nd ribs. They are a grouping of three pairs of muscles-the anterior scalene, middle scalene, and the posterior scalene.

What are the forum members talking about in relation to necks?

"There are these things called bridges - I do them for wrestling; it's suppose to make your neck stronger. It's kinda hard to explain. Lay on the floor face down then go on the balls of your feet into push up position. Then put the top of your head on the ground. Try to remove your hands and rock back and forth, use your hands when needed. That will work if you can follow my instructions." 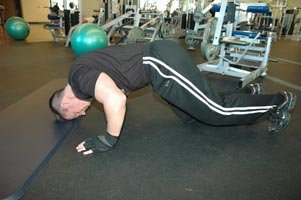 "I do that "insane" excercise as well as using the neck harness to hit the back of my neck. It helped out a lot; converting my pencil neck into a more normal sized neck pretty quick."

"Neck Bridges will make your neck huge. Get a wrestler or football player to show you."

"Make sure that you have deadlifts, squats, and shrugs (or some people use rack pulls instead) incorporated into your program design. If you want direct neck work, and don't have a 4 way neck machine, a neck harness works the neck extensors very well.

Bridging also works the neck extensors. They still leave side flexion and flexion of the neck. "Back" bridging works the neck flexors statically. I've learned an exercise from Combat Conditioning that allows you to work extension flexion, extension, and lateral flexion. It's called the 4 Way Neck Exercise. You use your bodyweight as the resistance (unless you would purchase a weight vest). If you are interested, I can try to explain it."

"Just do neck curls; they are effective - place a light to moderate plate on your head and put your head on the edge of a bench or your bed, then go up and down." 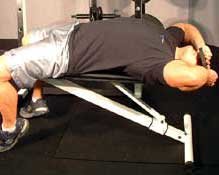 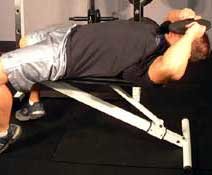 "Anyway, neck curls, neck extensions and traps work should beef your neck up nicely. Careful with the neck work though - I'd advise just doing neck rolls and isometrics for a while if your neck is weak to start with. That's what I did anyway; 3 weeks of isometrics and very light weighted work before using heavy weight.

The neck is probably the fastest responding muscle in the body; it'll grow very fast if you work it directly. Mine grew about 2" in 2 months after I'd started working it directly. A big neck looks great; it's definitely one of the most obvious muscles in the body."

"Traps actually run up into your neck and up to the base of your skull. Building your traps would probably be the best way to get some size. I've never done any neck isolation work before, so I can't say what kind of results you'd should expect from the extra effort."

"Building your traps helps slightly, a 4-way neck machine will blow your neck up."

"There was an article about this in MuscleMag this month. The suggestions:

That should about cover it!"

"You can either use the "head harness" or do some resistance exercises with plates. For example, lie flat on a bench as if you were going to do a bench press, only hang your head over the end, hold a 5 lb plate over your face, and do "head curls."

Some gyms have special machines designed exclusively to work the neck. Wrestlers and football players are required to work their necks, as having a strong flexible neck reduces the probability of injuries.

"Unless you're trying to specifically strengthen it for some kind of contact sport (wrestling, football, etc.), I'd stick with shrugs to add thickness to the neck. Much safer than doing weighted neck exercises.

The upper traps which run all the way up to the base of the skull and the levator scapulae are both specifically targeted by shrugs."

"My Neck routine is this:

"Shrugs; your traps run all the way up the back of your neck. Theres db, bb front, and bb back, take your pick."

"Deadlifts and shrugs will get your neck big. And remember to EAT!"

"For the past couple months I have been really working my neck hard; I use a neck harness. Since I have been training my neck directly I have noticed my traps, especially the upper traps by my neck getting HUGE and defined! I have done Shrugs and Upright Rows and never got this good of results with them like working neck directly.

Here is my neck workout:

Try it you will notice your traps growing fast! Well at least I did!"

"I feel that deads and shrugs really build a great neck."