Make Your Muscles Grow: All About Cell Volumizing!

When most gym rats talk about getting bigger they are obviously referring to muscle growth, or hypertrophy. Often, however they don't really have a clue as to what's happening within their muscles in order to make them bigger and stronger. For all they know little muscle fairies sneak into their rooms at night and when they wake up in the morning, voila, they're bigger.

Without fail, though, this lack of understanding never seems to stop the most ignorant of them from throwing around misinformation with poorer form than the 20 lb dumbbells they use for "cheat" curls. And although I'm not the most brilliant guy in the world, I consider myself fairly knowledgeable at the iron game. For some reason, though, I seem to be a target for these gym "experts" as they are continually instructing me as to how to train and diet!

One comment that I hear pretty often that never ceases to amaze me is the comment many gym "experts" make regarding creatine. Perhaps you have heard it too. It goes something like this "So whaddya think about that creatine stuff? I tried it and yea it'll put some pounds on ya, but it's all water weight and I don't like to feel bloated. Besides, you lose it all when you go off anyway". (It's amazing how the statement they wish to make is always posed in the guise of a question - as if they really wanted my opinion).

Well at this point rather than respond to the "question" I usually thank them for the info and let them know that they just saved me a lot of wasted time and money on such a worthless supplement. [Editor's note: this is called the "slap in the face technique" when dealing with know-it-alls.]

As an educator, I should be a little more understanding, but when I'm in the middle of a squat workout in which I am taking 60 second rest periods between sets, I really don't have time to reprogram Biff and his anti-creatine cronies. 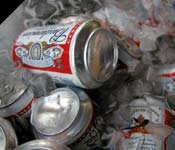 In all honesty Biff is right about one thing (god I hate to admit it); the first few pounds gained when taking creatine are probably just a result of increased water weight. BUT the bloated feeling Biff is referring to is probably not a result of his creatine intake but probably from his 6 Budweiser and his Bucket o' ribs at Sizzler last night. The reality of the situation is that an increase in water weight from creatine isn't such a bad thing.

What Is Muscle Growth? Hypertrophy vs Hyperplasia.

At this point, I know that you're all supercharged to learn how to both make more fibers and to make them bigger, but I'm going to have to put the breaks on and be the bearer of bad news. The problem with hyperplasia is that no one really knows exactly how to promote it. Once we are born, some experts believe, muscle fiber number remains fixed for our lifetime. Therefore under normal circumstances muscle fiber hyperplasia seems nearly impossible. Interestingly, though, experts have begun to speculate that under abnormal circumstances, hyperplasia can contribute to overall muscle growth. For starters, recreational or even moderately intense weight training will probably NOT do it.

The bottom line is that unless we are ready to boatload anabolic steroids into our systems, neither you nor I are going to be enjoying the benefits of muscle fiber hyperplasia any time soon. At least not over a period of less than 5-10 years (and even then it would be modest). So what about hypertrophy? Well that, my friends, is a promising reality.

To make the balloon bigger (hypertrophy), one can either add more water to the balloon, thereby stretching it to its maximum capacity (increase cell volume) or one could theoretically add more "rubber" (balloon material) to make the overall size of the balloon larger (increase in contractile protein). Although the mechanisms that cause increased cell volume and increased contractile protein content may be different, both are affected by weight training and there seems to be a link between the two that bodybuilders may be able to exploit in order to cause lasting muscle growth.

First and foremost, when we talk about hypertrophy, we are most often referring to the second type mentioned above â€¦quot; an increase in contractile protein (adding more material to the balloon). This type of hypertrophy is the most lasting since it constitutes a remodeling of the muscle fibers, making them permanently bigger than before (assuming you continue to train, of course). Muscle increases of this type are not only aesthetically pleasing, but also contribute significantly to strength. The more fibers available to contract, the more weight can be lifted!

"...an increase in water weight from creatine isn't such a bad thing."

But what about the other type of hypertrophy? Well let's put it this way; how many of you wish that your muscles looked as good outside of the gym as they do in the gym after a great skin-stretching "pump"? I know that when I was younger, I wouldn't even take one step out onto to the beach without doing some pushups first in order to "get a little blood into the muscle". This phenomenon, the infamous "pump", is partly a short-lived example of increased cell volume.

Fluid moves into the cell thereby causing it to stretch, take up more space, and make you look pretty darn good. Of course, opening a larger percentage of the surrounding capillary bed doesn't hurt either. Unfortunately, such increases in cell volume and blood flow disappear almost as quickly as they came. The good news is that there are other ways to increase cell volume for longer periods of time.

If you've read any of my previous articles, you know that I'm big on citing research, for without quality research, our attempts at finding out the truth about how our universe operates are merely stabs in the dark. (Kind of like Biff's attempt at rational thought.) This research focus, applied to the cell volume question has produced quite a bit of very interesting research that has (and is bound to continue to) dramatically impact the fitness and sports nutrition industry. Initially cell volume studies focused on the cells of the liver since the liver is the most important organ for whole body metabolic regulation (3,5,6).

What these studies found was that independent of hormone influence or substrate influence, decreased cell volume (cell shrinking) lead to cellular catabolism or protein breakdown, while increased cell volume (cell swelling) led to anabolism or protein synthesis. In this regard, the original authors of such papers concluded that cell swelling or shrinking acted as a "second messenger" to tell the cell what to do about protein synthesis. For example, hormones tell the cell to swell or shrink and it is this swelling or shrinking, not just the hormones' action on the DNA, that leads to changes in protein metabolism.

These findings were particularly exciting for muscle physiologists because this link could be explored in many clinical populations such as burn victims who are extremely catabolic and the elderly who tend to lose large amounts of muscle mass. Although the muscle research has mostly focused on catabolism rather than anabolism, a few important "take home" findings are evident. First is that decreased body water and intracellular nutrients can lead to cell shrinking and as we now know, increased muscle protein breakdown (7). [Editor's note: John's own research advisor, Dr. Peter Lemon showed this to be true in the early 80s with low-carb diets that reduced glycogen stores.]

Therefore by maintaining normal hydration and maximal substrate storage with ample fluid consumption and nutrient intake, an individual can easily prevent a great deal of protein breakdown. Also, although experimentally unproven, increased cell volume above normal hydration may lead to increases in muscle protein content. This is where supplements, especially those consumed immediately after bouts of intense exercise, come into play.

Virtual Muscle articles can help you get the results you are looking for!