Want to master the king of leg exercises? Start with the goblet and landmine squats and you'll experience royal gains in strength, size, and form faster than you can get under the bar. 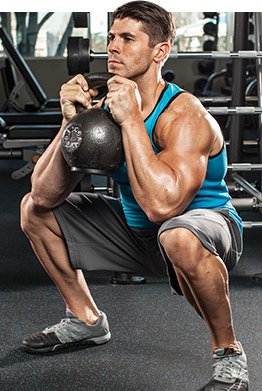 Take a vacation from back squatting and dial in your squatting pattern with these two relatively foolproof variations.

Squats are often touted as the king of lifts—not just for legs, but all lifts. But for most people who step under the bar, the only thing that's royal is the pain in their lower back the next day. You may think I'm just talking about newbs who pit themselves against a barbell way out of their league—and I wish I was.

The fact is, however, that most people in the weight room are atrocious squatters. Don't believe me? Just walk into virtually any commercial gym in the country and have a look around. Your eyes might start bleeding.

The answer isn't to stop squatting; it's to squat better. So do yourself a favor: Take a vacation from back squatting and dial in your squatting pattern with these two relatively foolproof variations. It could be the best decision you make in the gym this year.

Goblet squats with a dumbbell or kettlebell—popularized by well-known strength coach Dan John—are all many folks need to clean up their squat pattern. The anterior loading helps engage the core in a way that allows most lifers to achieve better depth than they ever could when back squatting. It also reminds them to keep an upright torso, because if they lean forward they'll drop the weight.

The technique is simple. Lil' John actually unknowingly nailed the coaching cues in one of his recent smash hits when he shouted, "Make ya knees touch ya elbows." Seriously, that's it. Just don't bounce to it! Pause at the bottom like I do here.

Of course, the problem with goblet squats is that once you want to hold on to heavier weights, you'll find yourself limited by your upper-body strength. Since you're squatting for your legs, that's not ideal.

When that happens, try this unique goblet squat dropset. Start off your set with goblet squats for a predetermined number of reps. Then drop the weight down as if you were going to perform swings, and continue squatting for the same number of reps that you did for goblet squats. This allows you to reap the benefits of goblet squats and work your anterior core while also allowing your legs to get more of a training effect.

This isn't a dropset in the traditional sense, where you incrementally decrease the load as you fatigue. It's what's known as a "mechanical dropset," where you switch to an easier variation as you fatigue. Whatever you call it, it's a simple yet very effective way to get in lots of quality reps.

While goblet squats are great, they're not totally foolproof. If you're still struggling to stay upright while holding dumbbells and kettlebells, you may have better luck with landmine squats. Landmine squats are very similar to goblet squats in that they are anteriorly loaded, but in a landmine squat the bar travels in an arc. This helps reinforce the necessity of maintaining an upright torso, because if you come forward, the bar jams into your sternum.

You'll notice in the video that Ryan is able to achieve great depth while maintaining a very upright torso, and without a lot of forward knee travel like you'll often see in a traditional squat. This variation is fantastic for working the quads, but also for getting a good strength-training effect without much stress on the lower back and knees.

It can also be useful to perform landmine squats to a box or low bench to help serve as a depth gauge so you don't start cutting your squats high. This addition also serves as a reminder to sit back into the squat rather than letting the hips come forward.

(As a side note, Brendan is in the running for the World MMA Award for Personality of the Year, sponsored by Bodybuilding.com. You can vote for him, and cast your vote in the other categories, here.)

If you were surprised to see that much weight on the bar in a landmine squat, don't be. Heavy landmine squats are a solid squat alternative for people with injuries, or who are looking for a higher-frequency squatting program but can't perform heavy barbell squats day in and day out. So load it up!

If seeing those landmine squats made you think about all the other things you can do with this underappreciated tool, this one's for you. After you've knocked out your squats with perfect form, you can add in a press at the end of the squat, as demonstrated here by trainer Kevin Anderson at the start of this brutal landmine complex.

Adding in the press can work well if you're looking to achieve a full-body training effect, and it can also work well for individuals who struggle to bring their hips through at the top of the squat. You'll find that you must come all the way through with your hips in order to perform the press.

Spend awhile with these variations, and watch your squat strength soar to new heights while your body feels a whole lot better—a win-win.

5 Front Squat Variations You Must Try

The front squat is earning more fans than ever, but that doesn't mean your front squat can't use some help. Try these 5 variations to clean up your form and make your quads weep!

Squat Bigger With The GZCL Method

No vague tips here, just a solid training methodology one lifter developed that helped him put 200 pounds on his lifting total.

The Overhead Squat: What Is It Good For?

The overhead squat is a great exercise—but maybe not for the reasons you think. Find out how it can promote the mobility, stability, and strength of your entire body.