Training Triceps While Lying Down

As introduced in Part 1, a triceps extension is a push-type, isolation exercise which works your triceps, but also trains your shoulders, chest, lats, and forearms, depending on how you perform the exercise.

Performing lying triceps extensions with dumbbells is a lot like performing them with a barbell, as discussed in Part 1, with the exception that using dumbbells enables you to use a semi-supinated grip (i.e., palms facing each other), as shown in Figures 1-2. 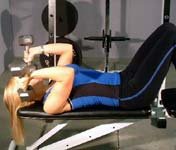 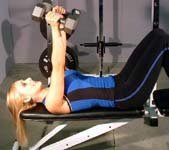 To perform a repetition of lying dumbbell extensions, grab a pair of dumbbells having a desired weight and then sit on a flat surface such as a bench or the floor. Lie back on the surface and extend your arms so that the dumbbells are positioned over your eyes, as shown in Figure 2.

Positioning the dumbbells over your eyes keeps your triceps under some tension while your arms are in the extended position. While maintaining your upper arms in the upright position shown in Figure 2, bend your elbows and allow the dumbbells to descend under control toward the sides of your head.

Focus on making your triceps do all the work while keeping your upper arms fixed in the upright position. Perform a maximal contraction of your triceps when your arms reach the extended position. 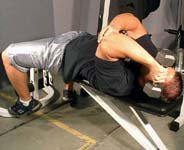 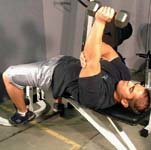 Figures 3-4 illustrate the execution of a "one-arm supinated dumbbell triceps extension." You can perform this variation of triceps extensions by grasping a dumbbell and lying down on a flat surface, such as a bench or the floor, and then raising the dumbbell overhead as shown in Figure 4. You can hold the dumbbell with either a semi-supinated grip, as shown in Figure 4, or a fully supinated grip where your palm faces your head. 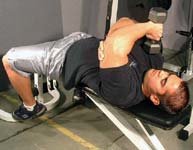 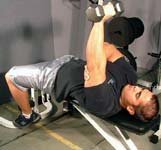 To perform one-arm pronated dumbbell triceps extensions, grab a dumbbell having a desired weight and then lie down on a flat surface. Extend your loaded arm straight up as shown in Figure 6. Using your free hand, grasp your upper arm just below the elbow. Your thumb will be on your bicep tendon and your fingers will be on your triceps near your elbow. Maintain your upper arm in this supported position throughout the exercise.

Training Triceps While Standing Or Sitting

To perform either variation of a French Press, you hold a dumbbell at one end with both palms and raise the dumbbell to an extended position a bit behind your head, as shown in Figure 7. In this position, your palms are facing up, supporting the weight on one end of the dumbbell. Positioning the dumbbell behind your head keeps tension on your triceps even when your arms are extended at the top of the lift.

When you perform French Presses while standing, be sure to stand straight up with your feet separated by about 16 inches. While keeping your upper arms fixed close to your head, bend your elbows to allow the dumbbell to descend behind your head until your forearms touch your biceps, or as low as is comfortable as shown in Figure 8.

Next, use your triceps to press the dumbbell upward until your arms reach the extended position shown in Figure 7. Lock out your elbows with a maximal contraction of your triceps.

When you perform French Presses while sitting, sit on a flat bench with your back straight. Keep your feet flat on the floor throughout the exercise. With your upper arms held stationary and close to your head, allow your elbows to bend and lower the dumbbell behind your head until your forearms touch your biceps, or as low as is comfortable as shown in Figure 9.

Use your triceps to push the dumbbell upward until your arms reach the extended position shown in Figure 10. Lock out your elbows with a maximal contraction of your triceps at the top.

Figures 11-12 illustrate performing an overhead dumbbell triceps exercise called a "standing one-arm dumbbell triceps extension." As shown in Figure 12, with this exercise you grasp a dumbbell and raise it overhead so that your arm is extended and your palm faces forward. Then, while keeping your upper arm motionless, you bend your elbow to lower the dumbbell directly behind your head, as shown in Figure 11.

Once you've lowered the dumbbell as low as you can, use your triceps to push the dumbbell upward until your arm is in the extended position shown in Figure 12. You can go for a maximal contraction of your triceps as you lock out your elbow at the top. Remember to keep your upper arm stationary throughout the exercise; this forces your triceps to do the work!

You can also use a low-pulley to perform standing one-arm triceps extensions over your head. To do these, attach a stirrup-handle to a low-pulley.

Grab hold of the stirrup-handle with the arm you want to train and then turn your back to the machine. Extend your arm directly over your shoulder, as shown in Figure 14. Grab hold of your extended elbow with your free hand; this will help you keep your upper arm stationary throughout the exercise.

Bend your elbow and allow the stirrup-handle to descend toward your back until your forearm touches your bicep, or until you cannot lower it anymore. In this position, your free hand should still be stabilizing your loaded elbow, as shown in Figure 13.

Now, press the stirrup-handle upward until your arm is fully extended, as shown in Figure 14. Remember to keep your loaded elbow close to your head, and don't move your upper arm around during the exercise.

A popular triceps exercise is the standing bent-over dumbbell triceps extension, also called a "kickback." Bent-over triceps extensions can be performed with either one dumbbell, as shown in Figures 15-16, or with two dumbbells at the same time.

You can perform a bent-over one-arm triceps extension by grasping a dumbbell having a desired weight and bending over until your upper body is parallel with the floor.

You can perform a concentration extension by attaching the stirrup-handle to a high-pulley and selecting the desired amount of weight on the high-pulley machine. Grasp the stirrup-handle and kneel down onto one knee. Be sure to kneel on the knee opposite to your loaded arm! Press the elbow of your loaded arm against the inside of your thigh and place your free hand on your hip, as shown in Figure 17.

With the exception of extending your loaded arm, you must hold the pose that's shown in Figure 17 throughout the exercise.

Incorporating Triceps Extensions Into Your Training

Your triceps are called into action when you perform pushing movements, such as bench presses and dips. On the other hand, pulling movements such as pull-ups and rows call your biceps into action. This antagonistic relationship enables you to effectively split your training into a push-pull routine wherein you perform pushing exercises on one workout day and then perform pulling exercises on the next workout day.

Following is a group of upper-body exercises that alternate push and pull exercises.

* To add weight use a dipping belt.

As mentioned in Part 1, many lifters prefer to split up their training so that different body parts can be trained on different workout days. Splitting up your training enables you to more thoroughly concentrate on specific muscle groups with more exercises and/or more training volume, as well as giving those muscle groups more recovery time than would be otherwise possible.

Following is one example of a 3-way split, wherein different body parts are trained on three different workout days each week.

As you can see, chest, shoulders, and triceps are trained on Mondays; back, biceps, and abdominals are trained on Wednesdays; and legs, traps, and calves are trained on Fridays. Notice that on Monday, pushdowns with a rope attachment and lying dumbbell extensions are both used to train the triceps after the chest and shoulders have been trained.

The primary difference in this example is that the arms now are trained on their own workday day. You'll also notice that the calves have been placed after the shoulder exercises, and shrugs are placed after the wide-grip pull-ups and bent-over rows. The biggest advantage to this 5-way split is that it gives you plenty of time to seriously ramp up the amount of volume you use without having to live at the gym.