Although the bench press has fallen out of favor with many of the 'newer' methods it is still a huge part of strength and conditioning.

Although the bench press has fallen out of favor with many of the "newer" methods that strength coaches are utilizing, it is still a huge part of the world of strength and conditioning. For this reason, I feel that it is import to write some articles about it in the hopes of shining some new light on an old favorite.

Problems With The Bench Press

One problem that exists with the bench press is that everybody has been doing it for so long it is taken for granted. By this, I mean that people do not truly understand the mechanics of the lift. Most people think that the only technique involved is lying on your back and pushing the bar away from your chest. If it were that easy, everybody would be benching 2-3 times his or her body weight.

It is kind of like saying, I am a runner, and I have run for many years, I know what I am doing, so I do not need to refine my skills. However, can you tell me why my hips, knees and back hurt, and why I am not getting any faster. Do I need to do more running?

Let's think about this. How many people out there have injured their shoulder doing the bench press, and in the grand scheme of things, with a weight that is relatively light? I am willing to say that you know more than one or two. I am also willing to say these people are probably training with poor technique.

I will admit that I probably like and utilize the bench press a little more than most sport specific strength coaches. Nevertheless, I feel that my experience in powerlifting has given me insight into an exercise, which most of these coaches only think they understand. They only understand the basics of the exercise, which bothers me.

I do not believe that any coach should dismiss anything until they study and truly understand all of its facets. If they have done this, and than disagree with its value, they reserve that right, until than, I say do your homework!

This series of articles is going to cover a lot of information. I am going to start with the basics of the traditional form of the lift, and than move into all of its permeations. In addition, I am going to tell you the basic of building a big, bad bench. I am going to give you several different variations of the bench press, and many other exercises that we use to improve it. I hope that if time allows, I will even give you some nice little protocols to use.

Now that I have made some statements that are going to get me some email death threats, it is time to go into the "educational" portion of the article.

The technique involved in the bench press is actually quite complex. It has to be, or less people would get injured doing it and more would do it better. I just got the new Monster Muscle magazine, and read the article on Ryan Kennelly's unbelievable 800lb bench press.

Now thinking about this, you must consider the fact that this was not a raw bench, he wore equipment, which aided in this almost ½-ton bench. In addition, many people of Ryan's caliber are known for their choice of vitamins (not accusing anybody, just making a factual statement).

There is also some room for the survival of the fittest theory. Those who are not genetically gifted will not succeed. This may mean that he has some very good genetics that allow him to be "super human."

These are all valid issues, but never the less, he took 800lbs, lowered it to his chest, and pressed it back up. Every muscle that is involved in the bench press, from the little rotator cuff muscles, all the way to the pecs, have to deal with this load. Moreover, they have to deal with this load often. I do not find the fact that he benched 800 lbs to be the biggest deal, it is the fact that he is training with huge loads all the time, and can due so fundamentally because he has perfect technique.

I do not know Ryan personally, but I would say that he took a lot of time learning the optimal mechanics of the lift. I would also say that if he did not use optimal mechanics, a load as light as 300lbs (light for him!) would injure him.

This is why taking the time to learn technique is important. Not only to see the big numbers, but to see them for an extended period of time. Technique is the basis for longevity, in the bench press, and in sports in general.

Let's break this technique thing down so you can understand it a little better.

First, let's look at the scapula, or shoulder blades. This is the first major problem with most people's bench press. The scapula must be retracted when benching.

By retracted I mean that they must be squeezed together as if you are trying to get them to touch.

This serves several purposes. First, it gives the shoulder stability. When the scapula are not retracted, they and the shoulders are not securely stabilized by the bench.

This means that the shoulder structure is solely responsible for the support of the bar load. This is fine as long as you are not working up to heavy loads that will compromise the integrity of the smaller muscles and capsules of these structures. 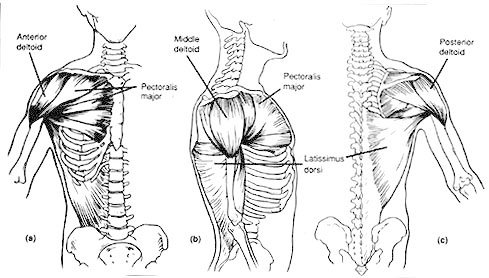 When the scapula are retracted, they are fully supported by the bench. Now, when the load of the bar pushes down, the shoulders can drive into the bench and push back.

J.M. Blakely, one of bench pressings guru's, equates this to jumping from sand. The sand gives away when you press against it to jump. This means much of the power that could be used for the jump is lost due to the surface. Now, if the same person were to jump off pavement, the ground would push back, instead of give away. This means than no loss in power would be present, and the individual would jump higher.

Now from a sport specificity perspective you may say, what good is training these muscles this way? You do not have a bench to put behind your back on the field, so is this a valuable movement? Well, yes and no.

The major issues are that it does not really include that great of a proprioceptive response, and it does not incorporate the core to the extent of some other exercises. These no's are a problem, but do not detract from the total value of the exercise.

Now let's look at the utilization of the latissimus dorsi (lats) during the bench press. The lats are greatly responsible for keeping the bar in its groove, and keeping the upper body tight to promote a solid base for muscular contraction.

The groove of the bar should be a straight line perpendicular to the point of contact between the bar and the chest (This will be discussed later in detail). The elbows should be tucked toward the sides of the body. Tucking the elbows is the primary job of the lats.

For instance, flair your lats and try to raise your elbow to the side. It is very difficult. Many benchers bench with the elbows wide. I believe this is the result of the poisoning of society by bodybuilding, and that it results in damage to the shoulder. Therefore, when the athlete is on the bench, they need to retract the scapula and flair the lats before they unrack the bar.

As I mentioned before, the elbows should be tucked toward the body during the bench press. This decreases the torque placed on the shoulder joint. This also is a position that is utilized more frequently in contact situations due to its stronger and more resilient properties.

This decreases the mechanical advantage for the involved musculature and can cause an arching bar path that may lead to shoulder trauma.

Keep the wrist straight. When the wrists are fully extended, the bar actually resides behind the radius and ulna. This not only creates large amounts of force within the wrist, but also hinders the mechanics of the lift. If the bar is not directly in line with the forearm, the line of applied force is located adjacent to, not in line with, the load force.

Use a closed grip and squeeze the bar. Try to "crush" the bar in your hands. As you are squeezing the bar, try to bend it in half. I always try to imagine that I am bending a rubber bar and that it is arching as I squeeze.

This will help you stay tight, and help keep those lats contracted.

Contract your abs and squeeze your glutes. This will cause a slight arching in your lower back. Even though many powerlifters try to increase the size of this arch as much as possible to decrease bar displacement, it is not the best thing for your lumber spine. A slight arch is okay, because the lumbar spine is formed with an arch.

I prefer to place the feet flat on the floor with the legs spread wide. Many powerlifters prefer to tuck the feet under the bench to increase the arch in the back. Even though this does decrease the displacement of the bar, and increase the mechanical advantage, it is rather bad for the lower back.

For this reason, I suggest that you place the feet flat with the legs slightly straightened so you can drive your heals into the ground with out lifting your hips. When you perform the leg drive, you should feel the upper shoulders driving into the bench. This will not only help you stay tight but, will help you push away from your face, which is crucial for keeping the bar in its groove.

The reason we hold our breath, or perform the valsalva maneuver (VM), is to support the spine and increase structural stability throughout the body. The danger lies in the fact that it can elevate the blood pressure to levels that some deem dangerous.

This is a very controversial subject, but is usually only dangerous for those with pre-existing conditions such as hypertension, or vessel weakness.

When performing the VM, it is best to take the breath in prior to unracking the weight. It is much more difficult to take in a sufficient breath when the shoulder structures are heavily loaded. Suck the breath into your stomach, and do not release it until you have locked the elbows back out at the top.

The groove, or path of travel for the bar, should be a straight line, not the arch that is so often depicted. The groove should be a perpendicular line from the point of bar contact on the chest. Traditionally, athletes have been instructed to press the bar back up over the face.

All I have to say is WHY? I have always been taught that the shortest distance between two points is a straight line. So how does it make since to extend the bar path by creating an arc.

Not only does this make you push the weight further, it cause greater shoulder rotation. This produces unnecessary wear and tear of the shoulders. The athlete should always be informed to press the bar away from the face. Finish and end in the same location.

Hope this stops some of those needless injuries and gives your bench a boost.

Progressive Sporting Systems offers you the unique opportunity to train under the guidance of experienced strength and speed coaches.