All About Calf Training!

Building impressive calves is a goal for many bodybuilders but to acquire them one must pay the price and calves require two things: pain and discipline. Learn how to get Dave Draper like calves!

Building impressive calves is a goal for many bodybuilders but to acquire them one must pay the price and calves require two things: pain and discipline. Building great calf muscles is one of the most difficult tasks you face when you are trying to develop a complete physique. Generally, most non-competitive bodybuilders focus on training their upper body and are more reluctant on training their legs, often just throwing in a couple calf exercises as a cool-down. Unfortunately, when you look at their bodies, you can see the result of the neglect.

Calf development is necessary not only if you plan to compete someday, but it also provides the solid foundation by which a symmetrical physique is supported. To produce giant calves you must focus on working hard to build them up. You must give them just as much attention as any other bodypart. The calves are simply not a glamorous muscle group; they are hard to develop, they hurt when trained hard, and when trained hard they leave you walking a little funny for a couple days after. This is probably one of the main reasons why most people wear sweatpants in the gym these days; to hide their calves.

Well you do not have to be one of those people hiding their calves. You could be one of the few to have impressive calves and show them off too. Since your calves are tough and carry your bodyweight throughout the day and rarely fatigue, you must hit them with far heavier weights than they are accustomed to, train them at different angles, and constantly shock them using every high-intensity principle possible.

The Physiology Of The Calves 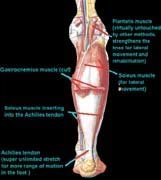 And when a muscle is not fully stretched it does not do as much work. The soleus, however, since it attaches below the knee joint, does proportionately more of the work during bent-knee movements like the seated calf raise.

Obviously the majority of calf training will be on the gastrocnemius muscles, since they make up over 70 percent of the lower leg.

With most calf training exercises, your knees are usually straight such as with standing and donkey calf raises, and in this position it is the gastrocnemius, not the soleus, that is doing the majority of the work. Since there are two different calf muscles, you must train both.

Since your calves are accustomed to carry heavy weight throughout the day (your bodyweight), the key to calf development is to go heavy. Set a goal of increasing your weights 25-50 pounds each month, which will also give your tendons and ligaments time to adapt and grow to the increasing weight. Shocking techniques are another key to calf growth. Some of my favorites include drop sets, partial reps where I can really overload the muscles, and supersets.

The most basic movement for the soleus is the seated calf raise. This involves doing calf raises through a full range of motion, from a point at which your calves are fully stretched to being on the tips of your toes, with the calves in a position of peak contraction. As with the standing calf raise, you need to keep your reps high around 12-20 and to gradually increase your weight over time. To get big you have to work heavy but still maintain proper form, use a full range of motion, and to stay in the necessary rep range.

Advanced training means hitting your calves from every possible angle. For example, start your first set with your toes pointed straight ahead, which will force you to lift the weight using both the inside and outside of your claves. Then on the next set, alternate your feet to a toes-in stance to emphasize the outer portion of the calf. On the next set, move your feet to a toes-out stance to emphasize the inner portion of the calf. Utilize these different positions for complete development. To place even greater tension on the calves, at the top of your calf raise hold the peak contraction for 2-3 seconds with each repetition and, trust me, you will be feeling it.

Since the calves recover quickly, you can actually train them with slightly more frequency than with other bodyparts. You can do both standing and seated movement in the same session or you can alternate between gastrocnemius and soleus training. Personally, I prefer on training my calves at the end of my workout because when my calves are tired it seems like my other bodyparts are little weaker as well. I focus on training my calves three times a week.

A good story to point out how tough it is to get great calves is a story of Arnold Schwarzenegger. He was at the beach in Venice, California, one day when a young bodybuilder came up to him and said that he would like to have calves like Arnold's. Arnold pointed to his lower leg and told him that his calves cost him 600 hours of painful training. If he wanted to have calves like Arnold, he would have to pay the price [1]. (Dave Draper & Arnold shown to the right)

In other words, bodybuilders whose calves simply do not grow do not train them hard enough or with enough weight. Give your calves the intensity, sets, and weights they need and your calves will simply be forced to grow. There simply are no short cuts. Learn to vary your program and use shocking methods and you will not be the guy hiding your legs in your longs pants.

Schwarzenegger, Arnold. The Encyclopedia of Modern Bodybuilding. Simon and Schuster. 1985, 1998.

I have come a long way in my training; only a year and a half ago I weighed a little over 285 lbs. I decided that I wanted to lose the weight, and ...