Squats are incredibly effective, but what about deadlifts? Here are a few deadlift exercises and their benefits. Try them and watch the muscle grow!

Most people already have a tendency to regard squats as the 'king' of exercises for the lower body. They firmly believe that if there is one lower body movement that you must be adding to your workouts, the squat is it.

Squats are an incredibly effective exercise as they will stimulate the quads, the hamstrings, the glutes, as well as all the core stabilization muscles throughout the center of the body and the back to a small extent as it must support yourself in the upright position as you move throughout the squat.

It is definitely important that you are including some variety of squats in your workout program week due to the all the benefits you will see from them. However, there is another exercise that parallels quite close to squats in lower body movements: the deadlift.

There are a couple of different varieties of deadlifts that you should consider when making the decision to add them to your program; each has its own pros and cons.

Let's take a quick look at the main varieties so you can make your most informed decision.

Some people will interchange squats and Romanian deadlifts within their workout program, performing one exercise one day and the other on the next. This allows for a nice variety in the weekly training program without overloading the CNS too much and potentially causing problems.

When performing Romanian Deadlifts the two important things to keep in mind are chest forward and butt out. If you think about this as you progress throughout the movement, you shouldn't have too many problems perfecting correct technique.

You are to begin by bending over, and while you press the chest forward while pulling the shoulder blades back and simultaneously sticking out the bum. Lower until you can grasp the barbell and then pull yourself back up keeping the natural curve in the back.

Also aim to keep the bar as close to the body as you execute the movements to avoid placing too much stress on the lower back. 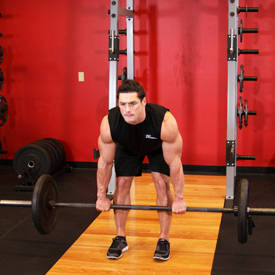 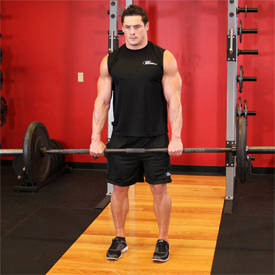 Stiff Leg Deadlifts, sometimes referred to as straight leg deadlifts, are going to place the primary focus of stress on the back half of the body—so they are often added to lower body workouts in conjunction with squats, which will hit the quads to a higher extent.

Keep in mind that if you are going to do both squats and stiff leg deadlifts in your program it will be quite stressful on the CNS, therefore it would be advised that you don't include a lot of additional accessory work, and you may even want to make sure you have a full day of rest the day following this workout.

If you really push hard on the lower body workout, you may find that you're unable to lift as heavy in the day immediately following, so it would be senseless to put another workout on that day where you can only give 50%.

When performing these you are going to place hands slightly farther than shoulder width apart (or just outside of where the legs are standing) and then pull the weight up while maintaining a flat back position.

The name 'stiff' leg deadlifts would imply that you are to try and keep the knees as absolutely straight as possible, however this is not necessarily the case. There will be a slight bend in the knees to ease the stress on the back and knee joint but it's important you don't let the bend get over-exaggerated, otherwise you'll be taking the focus of the lift off the hamstrings.

If you were to perform a Romanian deadlift next to a Stiff Leg Deadlift, there should be a clear difference in the amount of knee bend between the two. 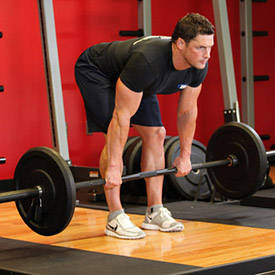 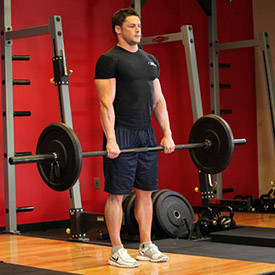 Finally, if you're someone who for whatever reason cannot perform deadlifts, then it's important that you do come up with an alternative exercise to perform so that you can still work the muscle groups in the body and create a balanced lower body workout program.

Hamstring Curls are an isolation exercise that will strictly target the hamstrings, so if you're already doing squats, this should be enough to make sure all the muscles in the lower body get worked.

Alternatively, you could also consider doing lunges, split squats, or step-ups, which will work the hamstrings but will also stimulate the quads as well.

So, if you aren't doing deadlifts, consider adding them to your program. They are a very effective lower body exercise that will help you get closer to reaching the goals you have set for lower body development.