I began my education of becoming a more successful bodybuilder with 'Sugar' Shawn Ray. Here's the workout which includes descriptions.

In every seminar I give and every client I train, I'm always asked the very same questions: Can you tell me a good workout for my chest or arms with a combination of mass-building exercises and shaping exercises?

Most notable are the questions on getting a great peak to your biceps or making them longer in length (when contracted some biceps are full and go all the way to the elbow, others are shorter in length and leave a gap between the elbow joint and the muscle).

Just so you know, it is physically impossible to change the shape of a given muscle group, you can however train it hard enough so that it grows and grows so that it appears different, but we are all genetically predisposed to what shape each of our muscle groups may take.

As a matter of fact I was once a believer of these shape changing exercises myself, however I had the good fortune to become friends with IFBB Hall of Fame Member Shawn Ray back in 2001. I was able to benefit from his guidance over recent years. I even had the pleasure of traveling out to California (where I now train full-time) from Ireland to train with my mentor; and if the truth be told, it wasn't long before he turned into my tormentor!!!

I remember the first workout—this was where I began my in-the-field education on how to become a better and more successful bodybuilder.

As we drove to the gym I asked questions about the forthcoming biceps workout, such as: what are we going to do for mass exercises, shaping exercises and to lengthen the biceps muscles?

I was quickly informed by Shawn who told me,

"If you take a look at Arnold and Franco, both had pretty good arms, however Arnold had long full bicep muscle bellies, whereas Franco had shorter muscle bellies. Even Albert Beckles had a short bicep, but had an amazing peak. There is no secret to getting your biceps to look longer or have a better peak, that's genetic, all you can do is train them hard, and maximize your genetic potential."

With that said we continued to the gym where Shawn tried to school me on training hard. I fed off the enormity of the situation, absorbing everything Shawn said and did. With that said, let me share what I learned during those priceless lessons.

So let's get a few things straight before we go into the workout. It is important to remember that the biceps are a relatively small muscle; however they do recover rather quickly from intense training.

When combined with an adequate amount of rest and a sufficient diet one can recover from an intense workout and be ready for another as quickly as 24-36 hours later, although, purely from a scientific perspective, I would recommend at least 48 to 72 hours to ensure a complete recovery.

Point to note: by using this method of training (going to quote Shawn here),

By doing heavy curls you are going to blast the muscle fibers by using very challenging poundages.

Below I have outlined one of my favorite biceps routines which utilize the principles I have learned from "Sugar" Shawn Ray. I have also included an alternative exercise in each category.

I love doing this exercise heavy, going up to 180 lbs at times, Shawn claims to have used some serious weight when he was competing but alas I started training with him after his retirement. When curling this heavy, using the cheat curl is OK, to a degree.

It is comparable to using forced reps, where your muscles are working as hard as possible and you are merely giving them a little nudge to achieve a full contraction. But when you start to swing the weight up using your legs and traps and arching your lower back, you're simply wasting your time and putting yourself at risk of serious injury.

All of the principles associated with the previous exercise are applicable here, it is basically a mimic of the barbell curl, you are simply substituting the dumbbells for the barbell. 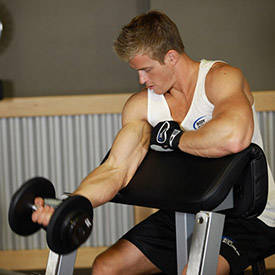 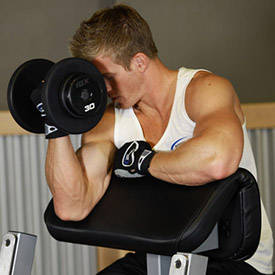 Preacher curls achieve a full peak contraction at the top of the movement by acting like an anchor for the elbow and keeping it steady. Most preacher benches have two padded sides so that you can rest your elbow at either 45 degrees or 90 degrees.

When performing this exercise the 90 degree angle is used, to maximize the stretch. The end phase of this movement also allows for greater contraction of the biceps as the muscle is supporting all the weight. The radius and ulna (the bones of the forearm) act as weight bearers when the 45 degree angle is used.

Essentially the same exercise as outlined above and differing only in that: 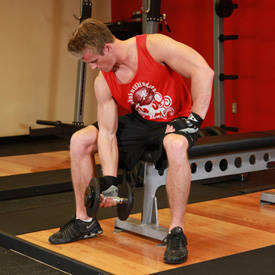 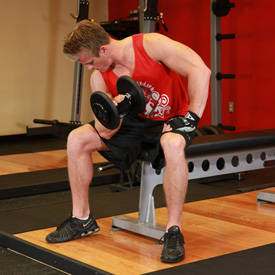 This movement can be done either standing, which is the way Arnold did it, or sitting on the edge of a bench, the Shawn Ray way. Regardless of which style you use the basic fundamentals remain the same - the elbow should be resting against the thigh, focusing equally on both the eccentric and concentric phases of the movement. The objective is to achieve total concentration so that both your mind and muscle connect.

This exercise is pretty much like doing a front double biceps. Start by using the high pulley on the cross-over machine. Make sure to stand in the center and have the humerus (the bone of the upper arm) parallel to the floor; slowly move from the flexed to the stretched position and maintain mental focus throughout.

So there you go, the path has been laid out for you to take the safest/fastest route to reach the summit and attain true twin peaks!!!