Struggling with the deadlift? Use your shirt, your training partner, and a couple of simple drills to master the ultimate strength-builder!

If you watch an inexperienced lifter getting ready to perform a deadlift, you'll see that they usually look like they're concentrating very, very hard. This is because they're trying desperately to remember all the cues they've read or heard and make their body follow them in exactly the right order. Yeah, the deadlift is that kind of movement.

Read someone's lips, and you'll probably see some of the following:

These are the classic deadlift cues, and they're totally legit. Unfortunately, thinking them is not always effective in getting people to do them. Somewhere between the Internet and the platform, a lot can get lost, whether from lack of bodily awareness or simple lack of experience. This can result in you struggling and straining to get that bar up, putting stress where it shouldn't go, and perhaps hurting yourself in the process.

If you've tried to use these classic cues and have gotten nowhere, consider having your workout partner shout some of my re-mastered versions at you instead.

A deadlift is a hip hinge. Unlike a squat, where your knees and hips bend about the same amount, in a hip hinge your hips do most of the bending. Because a hip hinge more greatly resembles the way we bend over and pick up items off the ground, many people consider it the ultimate functional movement.
1

Use the logo on your T-shirt as a visual cue: Nike, Adidas, or whatever clever saying you saw on the rack at the thrift shop. If you don't have a logo, pretend there's one on your chest. If there's a person standing in front of you, he or she should be able to read your logo throughout the entire rep.

What does this do? It forces you to keep your chest up, and it keeps you from letting your lower back round over. Both are essential for your safety, but also for accessing every iota of strength you have. When things get heavy, you'll need it all! 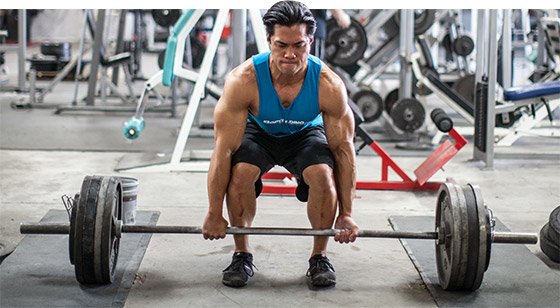 If the person in front of you can read your logo, your chest will be up and your lower back won't round over.

If you're more of a physical learner, you could reinforce this position by having someone hold a dowel rod at the three points of contact while you perform your reps. Go slow and light, and make sure you can physically feel the rod at all times. If you can't, pause and make the corrections before continuing.

The tucked chin will typically take care of itself when you master the unweighted dowel rod drill I outlined in my article about nailing the hip hinge, but it deserves repetition because it's so important.

Imagine you have a ball under your chin—a tennis ball, let's say. How are you going to keep that ball in place? You're going to keep your chin down. This will help fix your eyes on one spot on the floor throughout the entire movement. You shouldn't be able to see the wall in front of you.

Ball isn't your thing? You can also bite the collar of your T-shirt for a more tactile reminder.

Lat tension is crucial for maintaining stability in the deadlift. However, firing up your lats may be one of the harder pointers to master, because it can be difficult to know how to "tell" your lats to activate if you've never had to before. And unfortunately, all those lat pull-downs you've been doing aren't enough to make this happen.

Many times, the fix can be as simple as having a workout partner poke you in the lats to remind you where you should be feeling tension. However, sooner or later your buddy will get tired of poking you, and you'll get tired of getting poked. And even poking isn't always enough to get everyone to maximize lat tension.

If poking isn't doing the job, a drill like the band deadlift RNT will help drive home the feeling. To perform it, you'll need a dowel rod and a resistance band, both of which are usually sitting unused in a gym's weight room. Todd Bumgardner demonstrates this great drill in the video below:

Make sure you utilize the hip hinge movement pattern, not a squat, as you perform this drill. 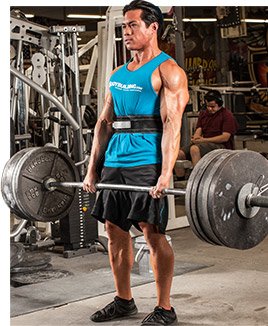 Make sure that your foot stance is appropriate, such as just outside or just inside shoulder-width.

If your knees are collapsing during a deadlift, first make sure that your foot stance is appropriate. A stance that is too wide almost guarantees that the knees will collapse inward, because they have nowhere else to go. Try adopting a narrower stance, such as bringing your sumo stance to just outside shoulder-width, or a conventional stance just inside shoulder-width.

I recommend spending some time addressing the reasons behind why the knees are caving inward, as Bret Contreras did well in a blog post last year. If it's a real problem, my go-to method for correcting knee valgus is wrapping a mini-band around the knees. As you perform the deadlift, use the band as a cue to keep your knees straight as you pull the bar, and then maintain that tension in the band as you move back down.

The solution: Make it less about hips, and more about glutes. Crack a walnut between your cheeks and hump the bar. In other words, fire your glutes at the top of a deadlift and squeeze with all your might. The end.

Hitting 315: 5 Ways To Breathe Life Into Your Deadlift

Having trouble ripping that iron off of the ground? Clean up your deadlift and hit a new PR with these five tips from a strong fitness model!

Brute strength combined with precise pointers will supercharge your deadlift performance. Use these five tips to break your deadlift PR!