Few exercises force extreme emotions out into the open like deadlifts. They let you experience the ecstasy of the raw power brought on by moving big weight off of the ground. They can also make you sick to your stomach and trembling in your boots just at the simple thought of doing them.

If the squat is the king of exercises, then the deadlift is surgery without anesthesia. It is tough, intense, and can make grown men cry. But it can also produce incredible results, which is why I say the deadlift should be a staple exercise of nearly everyone's training programs. Some naysayers will try to scare you away from it by saying it is too dangerous, will turn women into men, and so on—you know the drill.

Don't let them get to you.

The deadlift is one of the few exercises that can improve overall power, strength, explosiveness, and speed in any athlete, no matter if you are a pro, a weekend warrior, or just trying to make a healthy lifestyle and physique change. It develops strength in the legs, back, and core, the areas where greater strength is most deeply tied to athletic performance and pain-free living. Whatever you want to get better at, the deadlift can help support your growth.

It seems simple enough—bend over and pick something off the ground—but the movement's simplicity is misleading. An object that is sitting on the ground has no motion except for the gravity that is pulling on it. Newton's First Law of Motion states that an object at rest will remain at rest, unless an outside force acts upon it. This is also known as inertia, and this is precisely what must be overcome during a deadlift.

Let's get down to the particulars. 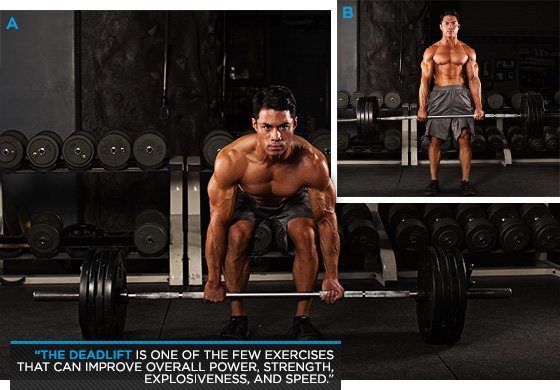 Which Deadlift is Right For Me?

There are two basic forms of the deadlift: conventional and sumo. Both work the same muscle groups but to varying degrees. The sumo deadlift involves a wider stance and focuses the load more on the hips and legs. In contrast, the back and posterior chain muscles are more active in the conventional deadlift.

The Romanian deadlift, as most people perform it, isn't technically a deadlift, because the weight doesn't touch the ground between repetitions. It's a great assistance exercise for deadlifts, but it's not what we're talking about here.

So is sumo or conventional best for you? Ultimately, people with certain body characteristics simply might feel more comfortable in one version over the other, and this is what should guide them. The longtime rule of thumb has been that if you have long arms and a short torso, conventional deadlifts are a better fit. If you have shorter arms and a longer torso, the sumo might be a better fit, because it decreases the distance the bar has to travel from the ground.

For this reason, many women find the sumo deadlift more approachable and beneficial, despite its macho name. It's also a popular choice for people with mobility issues that make it difficult to get into conventional deadlift form. Some may argue that the conventional deadlift is "more pure," but the truth is that neither is better or safer than the other. Both versions offer similar benefits and many lifters alternate between the two strategically. 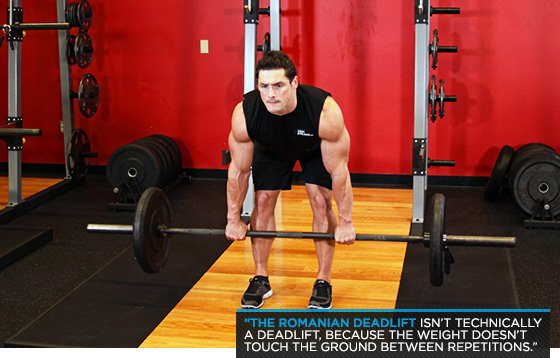 Before You Try It

The deadlift isn't the type of exercise to just toss in at the end of a workout. It works best when treated as the centerpiece. To get the most from it, perform it at or near the beginning of your program for that day. This also applies to complex and compound movements like the squat, bench, and pull-up. They are most beneficial when the muscles are not exhausted, and when they are performed before any auxiliary exercises.

When planning out your workouts, keep in mind that the deadlift is primarily a strength movement. Even though you may not be training for a competitive powerlifting competition, deadlifts of any style are not meant to be high-repetition, muscular endurance exercises. Trying to hit 20 reps will do nothing but set your progress back. Because of its mechanics, muscular failure and fatigue take hold before you realize it when performing the deadlift. As a result, form can go out the window quickly, increasing the potential for injury.

Keep the reps low and the load heavy. Depending on your training cycle, reps should stay between 1 and 6, and weight should stay between 85-95 percent of your 1RM. If you don't know what that is, pick a weight that feels heavy but allows you to finish your sets with proper form.

It's OK to start off lighter than you can handle. While you're nailing down the intricacies of form, don't bite off more than you can chew. Something as important and transformative as a heavy deadlift is worth working up to and planning around.

The deadlift starts with you pushing your feet against the ground and generating power from the legs up into the rest of the body. To make the most of this foundation, make sure you wear non-slip shoes with structurally-supportive sides and a solid, firm base. Athletic shoes which are overly cushioned or have air in the soles are not recommended. They are not stable enough for supporting the foot through this kind of stress.

This is especially important with the sumo deadlift. With the conventional deadlift, the force being generated on the feet is basically straight down. The force on the feet from the sumo travels more outward from the side of the feet and forward from the toes. The last thing you want is to have shoes blow their sides or slip. 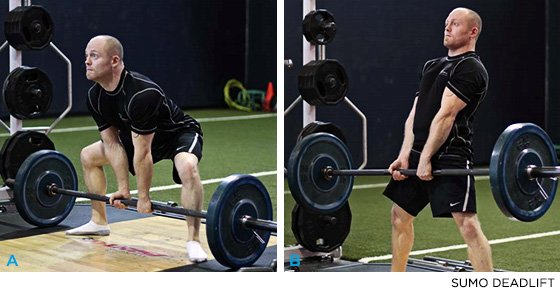 No matter which style of deadlift you decide to use, the grips are the same. Find which one you feel the most comfortable with, as well as which one allows you better control of the weight.

The most popular grip for any deadlift is referred to as a "mixed" or "alternating" grip, where one of your palms faces forward, and the other faces backward. It is a personal preference which hand faces forward and backward, and many people alternate hands to prevent uneven development in the upper body. An advantage of this grip is that it doesn't demand the same level of grip strength as an overhand grip, meaning there's less chance the bar twists or slips out of your hands.

Another popular grip worth considering is the overhand grip. This is where both palms face backward. This helps develop grip strength in addition to evenly supporting upper-body development. You may not be able to pull as heavy a weight with an overhand grip as a mixed grip, but working it into the rotation can make you a better deadlifter.

Finally, the most difficult grip to get used to—though possibly the strongest in the long term—is the hook grip. This grip is normally applied during the snatch and allows for better control of heavier weights. Have both hands with palms facing backward in an overhand grip, and wrap your thumb around the bar first; then wrap your four fingers around the bar and the thumb. Either the index finger or the index and middle fingers will help hold the thumb in place.

What about straps? Unless you have a medical condition which prevents you from holding on to a bar, leave them in your locker. A strong grip is a necessity for almost every athlete, and developing it can help with every other lift in the weight room—and plenty of things outside of it. I believe if you cannot hold on to the weight, you have no business trying to lift it.

OK, it's time head to the gym and find your bar. Which one, you ask? Use a standard Olympic barbell, not one of those short, weight-specific dumbbells stacked in racks near the dumbbells. Likewise, deadlifts using a trap bar are different enough to deserve their own article. If you lift in a commercial gym, look for a power cage with an Olympic bar and a wood and rubber platform in front of it. There's rarely a queue formed there—another benefit of deadlifts.

To line up for a conventional lift, your feet need to be between hip and shoulder width apart, and your toes should point slightly outward. Squat down and grasp the bar with one of the grips we discussed. The hands should be slightly wider than shoulder-width apart, and the arms need to be outside the legs, with the elbows extended.

For a sumo lift, foot position is more specific to a person's body than in a conventional deadlift. Going wide allows the lifter to be closer to the ground, thereby decreasing the distance the bar must travel. It also allows the lifter to more easily keep the knees out of the way of the upward-traveling bar and keep it closer to his or her center of gravity. However, going too wide takes away the mechanical advantage created from correct positioning of the lower body, decreasing the amount of force generated from the hips. This forces the lifter to activate the smaller and weaker muscles of the inner leg and lower back.

Each athlete will have to find the most advantageous positioning of his body to produce the best results. As a starting point for a sumo deadlift, athletes should place their feet at about the same width of their hands during an Olympic snatch. 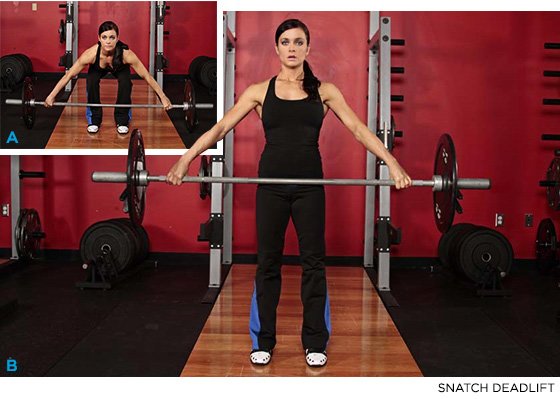 If you have never learned how to snatch, follow these directions to find where you need to position your hands: Measure from the outside of your shoulder to the first knuckles of the closed fist of the opposite arm, while pointing that arm straight out to the side. The resulting measurement should be the distance between the index fingers when positioning the hands on the bar.

Find that position on an Olympic bar and remember it. Is it on the second ring of knurling? Near the collars? Consider writing it down in your workout notebook until you've got it. Now, position your feet directly below these spots. Your toes should be pointing outward, in line with your knees. Reach down to grab the bar with your arms going directly down from your shoulders.

From here on, I prefer lifters to have a mental checklist to guide them through the pull. I like to limit coaching cues to 2-4 words to keep mental processing to a minimum, and the focus is maintained on the movement. Do whatever you need to do to remember these. I also keep the cues positive—never a "Don't do this!" type of statement. These general cues apply to both conventional and sumo style deadlifts:

Once the lockout is achieved, the toughest part of the lift is accomplished. Now you have to put the weight back on the ground—and we're not talking about just dropping the bar. Sure, it's easier to lower the bar than raise it, but unfortunately, some lifters think this means they can relax and not be concerned about form. This is a quick way to end up injured.

Perfect form must be maintained throughout the lift, both during the positive as well as the negative. So, just remember to basically reverse the order of the lift while maintaining exceptional form.

What about you? Did a certain mental cue help you to finally nail the deadlift? Let us know in the comments.