Brute strength combined with precise pointers will supercharge your deadlift performance. Use these five tips to break your deadlift PR!

I'll admit that as a strength coach, I'm biased when it comes to the last two. To me, nothing trumps strength. And nothing gets people stronger than good ol' fashioned deadlifts.

Guys can brag about their squat numbers despite only hitting quarter reps, or even brag about a big bench press that's more like an upright row for their spotter, but you can't cheat a deadlift. 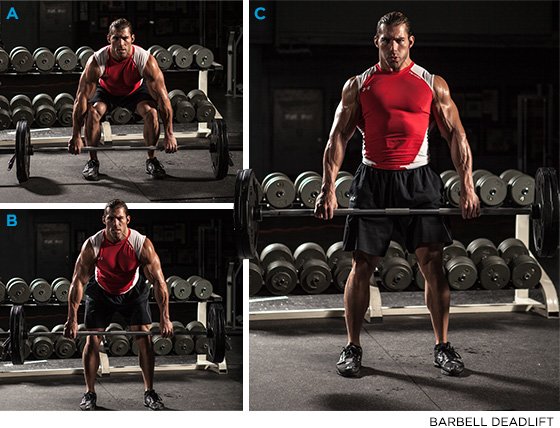 It's you versus the barbell. You either rip that son of a bitch off the floor, lock it out, or not. The deadlift lends itself very well to gauge progress. It's up to you, and brute strength, to break initial inertia off the ground. If you're able to lift more weight over time without blowing your sphincter, you're making progress!

Contrary to popular belief, there's more to deadlifting than just bending over and hoisting a barbell off the ground. The following tips will undoubtedly clean up your technique and improve your deadlifting dominance.

I once overheard a personal trainer explain to his client that a deadlift is a squat with the barbell in your hands. I'd trust this advice about as much as I'd trust a barber with a mullet, or a mallet. Unfortunately, this is a common thought process among fitness professionals and Internet users. I could write a Tolstoy-esque dissertation on why this is faulty logic, but let's agree on a couple things:

So a deadlift is not a squat, which serves as an appropriate segue into the next point. 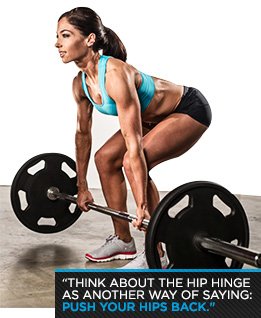 I see a lot of people who use a squat pattern to deadlift because they don't know how to hip hinge correctly. The problem is that the hip hinge is crucial to a proper and powerful deadlift.

You can think about the hip hinge as another way of saying, "Push your hips back." This is a cue that will come into play throughout the movement, from the deadlift setup to the descent back to the floor.

Make no bones about it: The setup is key, essential for mastering the deadlift and lifting big weight. I tell people to set up right against the bar and push their hips and hamstrings back as if they were trying to hit the wall behind them. Think of it like performing a Romanian deadlift—feeling significant tension in the hamstrings—until your hands can grab the bar.

In this context, your hips will be back and a bit higher than what you're probably accustomed to. Of course, positioning will differ among people with different leverages and body shapes, but the recommendation serves as a great starting point for most people.

Consider—as it relates to the hip hinge—the initial movement after lockout as you start the descent back to the floor. Many trainees mistakenly break with their knees and essentially "squat" the weight down. Focus on the hip hinge and push your hips back! If you feel the brunt of your weight translate into your toes, it's a safe bet you're "squatting" the weight down.

It's crucial to attain more upper back stiffness by keeping your chest tall and engaging the lats. Pulling heavy loads with a rounded back is a big no-no because it places compressive and shear loading on the spine.

In non-geek speak, if you consistently deadlift with a rounded back, your spine will eventually flip you the middle finger. The ability to resist shear loading (i.e., upper-back rounding) is a big deal, and how you initially set up is going to pay huge dividends.

Here's a video that breaks down many of the coaching cues I use with my athletes and clients:

How to Set-Up to Deadlift Properly
Watch the video - 5:42

Take Your Shoes Off

As innocuous as it sounds, taking your shoes off to deadlift can make a huge difference to clean up technique and improve overall performance. The main points to consider are:

If you train at a lame gym that doesn't allow you to take your shoes off due to safety concerns, your best bet is to wear a "minimalist" or flat-style shoe like New Balance Minimus or Chuck Taylors.

Deadlifting for high(er) reps doesn't make sense. When we get in the 5-10 rep range, I find that form becomes suspect at best. My deadlift programs tend to stay in the 1-5 rep range, even for beginners. 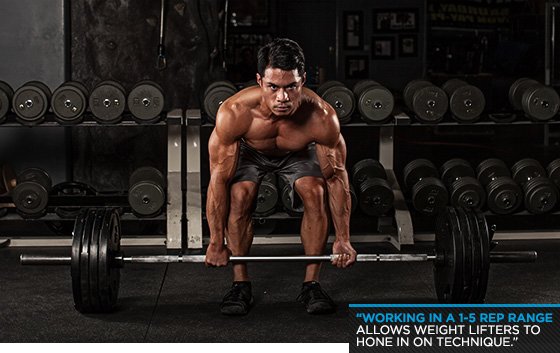 Working in a 1-5 rep range allows people to hone in on technique. When they become more proficient, I allow them to use heavier loads under that same rep scheme. It's a win-win.

As a paradigm shift, I tell my athletes and clients to think of it as five separate singles rather than thinking of "x" set as five reps. There is no golden rule that says you can't pause or reset between each rep. This is the mentality I lean toward to coach the deadlift. It slows people down and ensures that each rep is as close to perfect as possible.