What we found turned our uphill battle into a successful mountain climb: a 19 1/4-inch arm measurement after a few key exercise tweaks... This part is going to cover the triceps. Read on for more.

After you've been training for awhile - we've got 40 years between us - adding more and more mass can be an uphill battle, especially when you're drug free. But every once in a while you run across something that triggers a sudden burst of muscle size that sends your measurements into eye-popping territory.

In this case what we found turned our uphill battle into a successful mountain climb: a 19 1/4-inch arm measurement after a few key exercise tweaks and a handful of quick, intense workouts. Let's start with triceps, the meat of the upper arm...

One thing we want to get across right up front is that no matter who you are, you can always learn new things. And sometimes what you learn, or relearn, can trigger immediate size increases. For example, we'd been doing decline extensions - skull crushers on a decline bench - as our initial triceps exercise for a while, but our results had slowed. 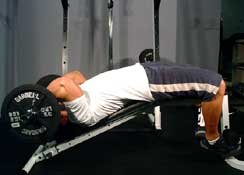 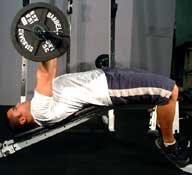 That indicated that we needed a change. We thought that to save time, and add mass, we'd use dumbbells and switch to a compound movement, close-grip dumbbell bench presses. No need to load a bar, much more efficient. We just knew an immediate mass increase was only a few workouts away.

Wrong! New mass didn't happen. In fact, our triceps started flattening out. That's the equivalent of a six-game losing streak in any team sport - depressing and deflating, literally! We refused to believe it at first and kept plugging away. After all, so many experienced bodybuilders say that the close-grip bench press is a big-time triceps developer. Then we finally snapped out of our trance...

We immediately started analyzing our workout. (We have also analyzed Ronnie Coleman's and Jay Cutler's training; see the Bodybuilding.com archives). Maybe we need to use a bar. Nah, that wasn't it. That torqued our shoulders and added even more setup time. (Now for a "D'oh!" moment.)

In our own e-book, The Ultimate Mass Workout, we classify close-grip bench presses as the Ultimate Exercise for triceps but - here's the key - on a decline! We were doing them flat (you should now picture our palms smacking our foreheads - D'oh!). We were neglecting that critical Ultimate Exercise tweak.

New triceps sweep immediately; shirt sleeves got tighter, with apparent mass increases after every workout. In fact, after only a few weeks Jonathan's arms taped 19 1/4 inches - bigger than they'd ever been (and if you look at the photo, you can see that we missed the apex, or lowest dip, of his triceps, so they actually were even larger)! 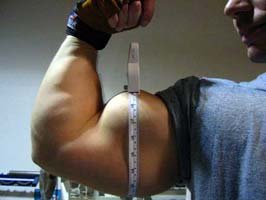 That's with only four to five sets for biceps and triceps. The switch to a declined triceps movement up front in our program was key, but there were other reasons, too, as we'll explain. But first, here's the triceps program we used:

We did a set to exhaustion - around rep 10 reps - did some X-Rep partials near the top, semistretched position; immediately reduced the weight and then cranked out another set to exhaustion, with more X Reps or an X Spot static hold. We rested about three minutes and then did a second round, or we did a drop set of lying extensions instead of a second round of pushdowns. 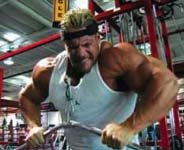 On kickbacks we kept tension on the triceps throughout the set by lowering the dumbbells only about two-thirds of the way down on each rep, and we finished the set with a few straight-armed kickbacks, to force the lats into the action to fry the tri's.

Then we rushed over to two flat benches set up parallel to each other and did bench dips - but we used a partial X-Rep at the bottom, after each full rep, and ended the set with X Rep near the bottom. (By the way, that between-reps-partial technique is one Cutler uses a lot; see his DVD). 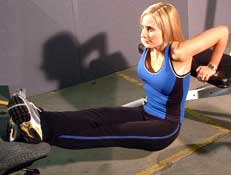 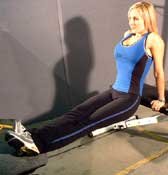 We did these at one side of the cable crossover machine, turn sideways facing our nonworking arm to the weight stack and do pushdowns with the outer arm. Sometimes we used a palm-up grip, other times it was standard palm-down. When full reps were impossible, we fired out X Reps near the top, semistretched point, of the stroke.

Remember those "other details" we mentioned? Here's the first: Our initial exercise, elbows-flared pushdowns, remained constant at every workout, but the rest of triceps routine changed at every other session, as follows:

We did these using a rope attachment on a high cable - face away from the weight stack, lunge forward and do extensions behind your head, extending your arms on each rep till they are parallel with the ground (Can also be performed kneeling, without the lunge). 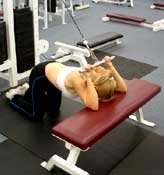 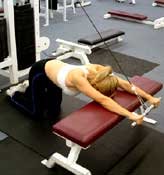 We did X Reps or X holds at the semistretched point (hands behind head), reduced the poundage and fired out about six more reps, with X Reps at the end or an X hold. (That drop-set technique is a key mass builder, as we'll explain in a moment.)

We did these with a dumbbell in each hand, simultaneously extending them. We did two sets, each ending with X Reps near the stretched position (close to the bottom of the stroke).

Why did we switch the last part of the routine, the more isolated exercises, at every other workout? So that one workout was arm-down contracted-position work (kickbacks, etc.), and then at the next workout we got arm-up stretched-position work (overhead extensions, etc.).

Both of those positions have special mass-building qualities, and by alternating between the two we kept the stress on the triceps fresh and trained the triceps full arc of flexion.

With either routine that's only about five sets, but aside from using a "decline" exercise at every workout and alternating between contracted-position and stretch-position exercises at every other workout, there are some other reasons this quick triceps mass blast is so effective.

We'll show you how we applied many of these same growth tactics to our biceps training in part 2 of this feature. Till then, pack some new size on your tri's with a quick-hit multi-angled attack - and don't forget the decline.