How would you like to add 1 inch of fresh new muscle growth to your upper arms in the next 45 days? I'll bet you do unless you already have arms like Manfred Hoeberl. Since arms are one of the most popular...

How would you like to add 1 inch of fresh new muscle growth to your upper arms in the next 45 days? I'll bet you do unless you already have arms like Manfred Hoeberl. Manfred's arms have measured a legit 26 inches in peak condition. Since arms are one of the most popular (if not the most popular) muscle groups then this article should be most welcome.

The system of training I'm going to describe for upping arm size is not new by any stretch of the imagination. It was first introduced to me many years ago by my good friend and power bodybuilding mentor Donne Hale of Miami, Florida. He called this system of training the Super Rest-Pause. It is best described as the performance of ten sets of a select exercise, in which the number of reps change with each proceeding set, with very short, constantly changing rest-pauses between each set.

For example, in the first set, do one repetition, rest 1 second, perform the second set by doing two repetitions, rest 2 seconds, do a third set for three reps, rest 3 seconds etc. Continue on in a cumulative fashion, adding 1 additional repetition and additional second of rest-pause until 10 full exercise range of motion reps are completed for the 10th and final set.

Obviously to accommodate the Super Rest-Pause technique as described a poundage will have to be used that is approximately 75% of the amount used for an un-fatigued 10 repetition set. For example if you are able to perform 10 reps with 100-pounds in say the Barbell curl, then use only 75-pounds (.75 x 100 = 75-pounds) for each of the ten sets. Though 75% seems to be an average, some individuals will use slightly more or less poundage, depending on energy, endurance and sanity.

An Example Of Super Rest-Pause Using The Barbell Curl:

Your biceps should be in pain and ready for growth! Move on to the next exercise, as described below.

Structuring a Super Rest-Pause system for the upper arms, I involve a combination of five arm exercises, alternating triceps and biceps, but working more on the triceps since they contribute to the most involved muscle mass of the arms.

I will assume that you have a grasp of the most basic exercises and I have therefore only briefly described the "technique-emphasis" that I feel is very important. The exercises selected are based on my personal wants and needs and it is not my intent to make a statement with regard to which ones have the highest or lowest level of Neuro-Muscular Activation (NMA). The question you have to ask yourself is how do you feel when you're doing an exercise? Is the exercise working? Listen to your body. 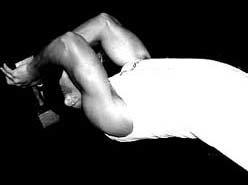 Experimenting with different exercises is a form of freestyle training. You might instinctively go with Skull-Crushers (lying triceps extensions) and Scott preacher barbell curls in place of the first two exercises listed above, for example.

I perform ONLY one complete sequence of the Super Rest-Pause on each of the five exercises. Don't try to repeat the super rest-pause sequence more than once on each exercise.

If you do, you will only be impeding your progress. I followed the above Super Rest-Pause technique twice per week (Monday & Friday) for approximately two weeks.

It's important for the body to send a message to the pituitary gland to continue secreting growth hormone over the already opened pores of the awakened and alert muscle fibers of the upper arms (or for any other muscle group for that matter). One of the best ways I know of to do this is through a couple of variations of the above mentioned Super Rest-Pause system.

This particular procedure is a reversal of the Super Rest-Pause already mentioned. Instead of increasing the reps and rest-pauses each proceeding set, I'll use slightly more poundage and work down the rep ladder (i.e. 10 reps, 9 reps, 8 reps, 7 reps etc.) while keeping a constant ten second rest-pause between each and every count down set. It's important to note that on the final set, normally to be only one repetition, squeeze out 1, 2, 3, or as many reps to absolute momentary positive failure as possible.

An Example Of Variation 1 Using The Barbell Curl:

A couple of "bugs" will reveal themselves in this variation. First localized muscle fatigue sets in so strong during the eight rep and seven rep sets, that it's difficult to complete those sets for the required rep count. The one solution, if the system is to be followed properly, is to reduce the starting poundage. Secondly a couple of the lower rep count sets may seem extremely easy. Rather than pumping out more reps than required for a particular set simply perform the repetitions more s-l-o-w-l-y (5-6 seconds in the positive phase and 5-6 seconds in the negative phase). By slowing the repetition speed, from say 3 seconds in the positive and 4 seconds in the negative phase(s) of the rep(s), there will be an increase of intensity (time under tension) plus the mind to muscle link connection will improve.

The second variation is to change the repetition scheme from a countdown modality of 10, 9, 8, 7 etc., to a firm ten reps plus the rest pauses and number of sets changes as well. First I calculate a poundage I can do for 10 repetitions.

Here's where the program gets interesting. I'll do 10 reps for each set, and the secret to accomplishing this is two-fold. First the length of the rest-pauses changes from 10 seconds to 30 seconds upon the completion of the first set of 10 reps. On each proceeding set I'll add an additional 15 seconds of rest-pause time. After the second set rest-pause 45 seconds; after the third set, 60 seconds; after the fourth set 75 seconds; after the fifth set 90 seconds etc. I do this for six sets rather than ten. When I get to the point where I can do all six sets rather easily for 10 reps then and only then will I add more poundage (magnetic weight plates are great for introducing additional micro-loads).

An Example Of Variation 2 Using The Barbell Curl:

Using the training protocol of the original Super Best-Pause, and the two variations, I followed each one for approximately two weeks and on the same frequency (Monday & Friday). So you would do the original variation for two weeks, then variation one for two weeks, and finally variation two for two weeks. I personally feel that six weeks is long enough to use the three programs. I continued with the same five exercises mentioned earlier, but as I said, you are free to experiment with different exercises.

If used properly, the reliable Super Rest-Pause system will help you to achieve surprising and pleasing results in fresh new arm growth. It did for me. Stay flexed!

Be Sure To Also Check Out:
The Right To Bare Seam Splitting Arms!

Dennis B. Weis is a Ketchikan, Alaska-based power/bodybuilder. He is a hard-hitting, uncompromising freelance professional writer and investigative research consultant in the fields of bodybuilding, nutrition, physiology, and powerlifting.