Top Celebrity Beach Bodies: Shape Up Like A Star This Summer

Summer movies are all about sunsets, slow-mo shots, and things that go bang. These 10 celebrity icons have banging bodies. Get their tips to look as good in the sand as they do on the screen!

With summer pending like a high-octane preview to a Hollywood blockbuster, people everywhere are busting booty to tighten up for the premiere of beach season. Celebrities have the most at stake. Thanks to the magic of the telephoto lens, they can end up on TMZ and tabloid covers looking like bronzed icons ... or pasty beached whales.

These ten celebrities always seem to do it right. Their bodies melt snow cones, radiate heat waves, and have even been known to drive up air conditioning bills in the coldest of climates. Put Gisele Bündchen in Somewhere, Siberia, and locals would crank up the AC for the first time in decades.

If you want to look good in the sand, you can benefit from training like those on the screen. While celebs might not be trainers or dietitians, they often have access to the best. Check these ten celebrity beach bodies and glean a quick training tip from each. 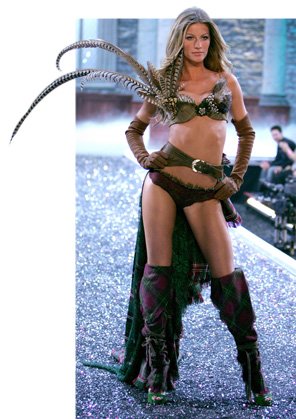 The statuesque physique of the Brazilian supermodel faces more challenges than most when it comes to body-sculpting. Long levers make for difficult lifts; she needs to focus on functional training so she can rule the runway. Her resistance training workouts are said to include weights, body-weight moves, and resistance-band training. Cardio includes cycling, treadmill work, and circuits. Flexibility is also important — after all, you wouldn't want to pull a hamstring on the catwalk, or get 'alligator-arms' in the playoffs.

Tip: When you're tall and lean, it's important to build your diet around protein. Include at least 15 grams at every meal, and make sure to slug down a shake if more than a few hours lapse between meals. 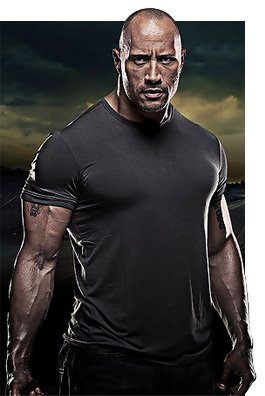 The "People's Champion," as the Rock was known in professional wrestling, is always in impeccable shape. I appreciate his build more than those of other male actors these days. I grew up in the 1980s, when action stars were real @ss-kickers and name-takers like Stallone and Schwarzenegger. Sure, looking like Johnson requires that you grow to 6-foot-6, mutate your genetics to grow high-arcing eyebrows, and have years of training under your belt, but you can still make major gains by following his lead, if you smell what I'm cookin'.

Tip: A recent training video shows Dwayne performing what looks like a typical bodybuilding workout, until he starts performing some explosive box jumps. These are great not only for power, but also for getting lean. This is a great way to start your workout, once you finish a dynamic warm-up that includes muscle activation drills for your hips. 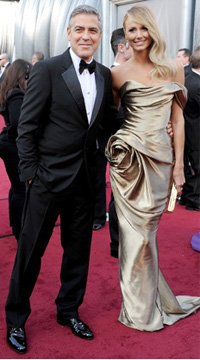 The current standard bearer for "I want to look like that," Stacy Keibler's bikini body epitomizes what it really means to cross-train. Most women with athletic talent might consider cheerleading with the Baltimore Ravens to be an apex, but not Stacy. This blonde bombshell took her jaw-dropping legs to the squared circle of professional wrestling, then challenged herself on Dancing With The Stars. Her varied athletic leg-work helped her craft a defined, yet feminine build — one appealing enough to capture George Clooney's affections (what a heist!).

Tip: The takeaway from Stacy's training? You benefit from constantly switching your workouts. Don't get stuck in a rut. It really does a body good to switch things up frequently. Train for definition, but train for athleticism as well. 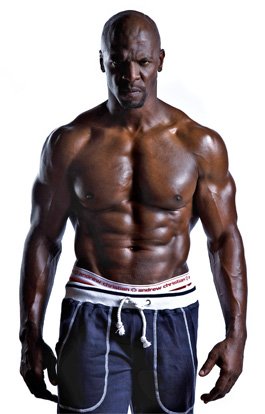 We love this guy! And not just because he told us we had to. Terry has a bodybuilder's heart and mentality — the byproduct of playing D-end in the NFL and Cheeseburger Eddy in The Longest Yard. Terry's physique serves as his calling card on screen, whether he's acting the "Beefcake" in movies or popping his pecs like corn in commercials, talk shows and quinceaneras. Crews operates in beast-mode 24/7, but he's also an engaging guy with a wicked sense of humor. Just watch the Jerome Mayberry videos he filmed with BB.com. His alter ego's crazy/hilarious/inadvisable training advice aside, this guy is so legit he makes illegitimacy cower in fear.

Tip: Treat your rest periods as important parts of your workouts, not just "dead zones" in between your working sets. How quickly you move between sets affects the hormonal environment inside your body. Shorter rest periods can turn you into a fat-burning furnace. 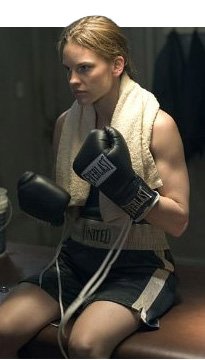 How does a skinny, undefined actress radically transform herself into a toned and lean Million Dollar Baby? Hilary Swank did it through hours of intense training and more, not fewer, clean calories. Hilary turns heads anytime she wears a 2-piece. At the time of Million Dollar Baby's release (2004), Hilary was quoted to the effect that she added close to 20 pounds of muscle. For Boys Don't Cry (1999), Swank slipped down to 7 percent body fat (and won her first Oscar)! She surely doesn't resemble the hulk some women envision in their weightlifting nightmares. In male dreams, she, well... Let's just say she's seen differently.

Tip: Don't be afraid to lift weights that seem heavy for you. Most of the girls who do figure or bikini contests lift hard and heavy, and they diet almost like bodybuilders. 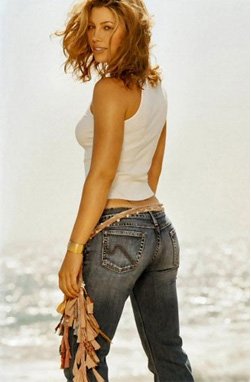 She exploded onto the muscle scene in the early 2000s in Blade: Trinity, with a vampire-kicking physique, and she hasn't slowed down. She isn't the sheltered sister from 7th Heaven anymore! Biel describes herself as a gym buff; she enjoys every type of physical challenge possible. She recently climbed Mt. Kilimanjaro. When Jessica wears a bikini, it's obvious she trains her upper body as hard as she trains her lower half, a lesson all women need to understand. She exudes a sex appeal that makes most men half-queasy, half-elated. Biel is a legit Hollywood heartthrob: She's engaged to Justin Timberlake, bikinis beg her to wear them, and her Make The Difference Network aims to actually save the world.

Tip: By adding plyometric high-intensity stair training to her workout, Jessica ensures she gets double the results in half the time. (And it shows.) 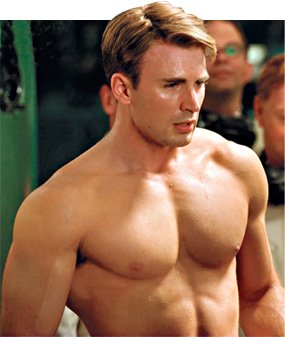 Evans's superhero physique was built completely different than you might think. For his role as Captain American, Chris needed to build muscle, but not as much muscle as Chris Hemsworth packed on for Thor. In an effort to show off the classic physique for ex-gymnast Steve Rogers, Chris continued his current weight training but upped the protein and healthy fats in his diet. The diet change is what resulted in his impressive physique. (That, and heavy doses of all-American awesome.)

Tip: Perfection is sometimes the enemy when it comes to nutrition. Evans has admitted to indulging in his share of cheat meals, but he makes sure they remain the exception, not the rule. His training allows those meals to be used as fuel rather than deposited as fat. 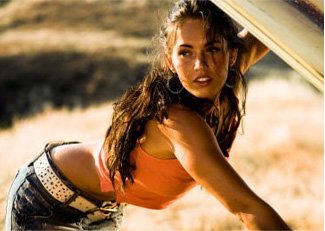 The former Transformers star isn't shy about the body part that attracts the most attention when she wears a bikini. Her abs are both cut and flat, displaying qualities both sides of the female fitness world want. What is her rocking stomach secret? Brief ab circuits that begin with a basic plank for time and progress to an interval-style circuit lasting about 15 minutes. The circuit melts fat by keeping her heart rate elevated at all times. Megan doesn't need to be in movies to look sexy, but we've never seen anyone pop a hood better.

Tip: Abs are made in the kitchen, and breakfast is the key meal. Consume only carbs at that meal, and your body shifts to an insulin-pumping, fat-storing machine all day. Instead, make protein the dominant macro at breakfast. 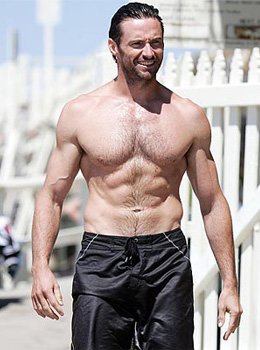 What does an actor who needs to switch from being a mutant to a former boxer-turned-robot-trainer do for a workout? According to Hugh Jackman, you learn as much as you can from each camp. Hugh turned to traditional bodybuilding to enhance his shoulders and arms for all those action shots in Wolverine. When it was time to modify his body to better represent a former boxer, he trained for hours with former champion "Sugar" Ray Leonard. Now that Hugh has to to play Wolverine again, how does he build a mutant-worthy diet? Recently, Hugh was quoted saying he's had discussions with Dwayne "The Rock" Johnson on how eat to gain muscle fast. There is little question that Hugh can regenerate his mutant musculature.

Tip: Add boxing to the mix! It's a cardio blast and it pummels your core. One victory of prize fighting: Abs. Boxing also teaches you a valuable life skill. You never know when you may have to fight futuristic robots or slay rebellious mutant hordes. 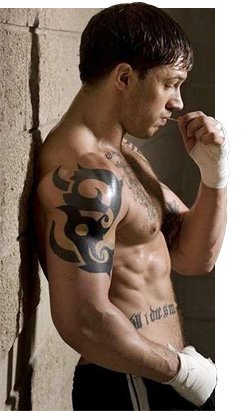 It seems that anytime Hollywood needs an actor for a butt-kicking role, Tom is the first beast dialed. For his role in the mixed martial arts movie Warrior, Tom had to isolate specific body parts, such as his upper back. He spent extra time each workout on that area. When he accepted the role of Bane in this summer's blockbuster The Dark Knight Rises, he had to beef-up his entire physique to look like the comic beast born and raised in a Caribbean prison. He switched to more overall workouts per week while increasing his calories to close to 6,000 per day! If anyone could break Batman's back, Hardy is the man.

Tip: Gaining size is a numbers game. You need to eat enough to fuel protein synthesis and muscle growth. Six thousand per day may not be advisable or sustainable, but it works if the goal is rapid growth.

Jimmy Smith is a certified strength and conditioning specialist (CSCS) and is routinely sought after to provide cutting edge, no-B.S. advice.