Why Calves Lag Behind!

See why your calves aren't growing and learn what you need to do to change that!

I have done some articles on calves and calve training before but this is a little bit of a different approach. I have scanned many of the message boards, talked to many of my friends and even took into account my own personal struggles with calve development throughout the years. For years I thought that calve development was solely dependent on genetic makeup and just figured that you either had them or you didn't. Now granted in some cases genetics play a huge role in certain individuals calve development but not everybody. Arnold had really weak calves but busted his butt to build the cows he ended up with. But it wasn't until after he changed his approach to calve training.

The more I watched people train (or try to train) and the more I talked to people about calve training and development one glaring thing continues to stand out. Most people train calves totally different from every other body part on their body. Now grant it, calves can be a very boring body part to train and it's not as fun as training say chest or arms but in order to get that overall well developed body they can't be neglected. People will blast each and every body part but when it comes to calve training they give it minimal effort, if you want to even call it minimal. Since I joined the current gym I train at I have yet to see anyone and I do mean anyone that has trained calves first in their workout and with the same intensity that they use for their other body parts. I see them blast their chest, blast their arms, blast their shoulders, blast their legs, blast their back but never see them hit the calves with the same intensity, yet they whine about their calves lagging so far behind.

When training calves pretend you are training your chest or biceps. Calve training requires just as much if not more of the same style of intensity that you use when training these other body parts to get them to respond at a good rate of growth. When I do see people in the gym train calves it's so different from their normal training. The same people that were slinging around big heavy weights and cussing during each and every rep are now doing calves the in a totally opposite manner. Calves must be forced to grow and you have to use intensity to do that. For me, when I blast my calves I am pushing myself through the ultimate pain barrier. Nothing burns as bad as a good hardcore calve workout, nothing. Try doing a set of 50 reps next time you hit the calves and you will see what I mean.

I see some really big boys with a lot of muscle mass, except for calves, and it cracks me up the way they train. They will go as heavy as 400lbs on bench press, as heavy as 500lbs on squats and curl 100lb dumbbells for reps, but when it comes to training their calves they will be on the seated calve raise with a whopping one 45lb plate on the rack and still wonder why their calves won't grow. Heavy weights are great for stimulating the chest to grow right? So why not the same for calves, they will grow in the same manner as you chest or shoulders would if you force them with the heavy iron. Since you are walking on them each day it is a must that you overload them with a ton of weight when training them since they are a tough, dense muscle from all the other things you do with them: running, jumping, walking etc. I read some where that Arnold believed in overloading them with 2-3 times his bodyweight on standing calve raises. You have to force them to grow with the heavy weights, none of this sissy crap using one or two plates. 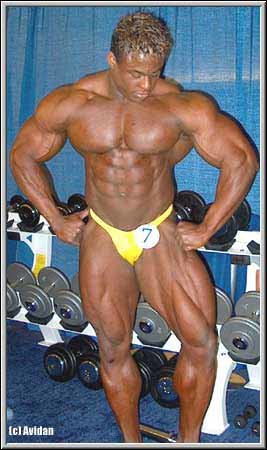 When I see most people train they do the usual three sets of ten reps and walk off with out being in pain, I judge a good calve workout by the amount of pain I am in after I blast them. The three sets are fine but I believe in taking the calves to complete failure and for me that usually falls around 20-25 reps. They burn bad, really bad but that's where the intensity comes in to help push through your pain threshold and stimulate them to grow like never before. I also like to go as high as 50-100 reps on certain days. This will make you hurt like you have never hurt before, but I love it.

As far as training frequency goes I think it's all up to the person. I train mine two to three days a week, more three-day week training than two days. I have seen my best results from hitting them on Monday, Wednesday and Friday. On occasion I will train them once a week just to confuse them. I know some people that train them everyday, claiming that since they are such a tough body part that this is the only way to make them grow. Now, what kind of growth would you expect of your chest if you trained it everyday (I have been around some guys that do this too, you know the everyday bench pressers in the gym)? None would be the correct answer; your calves need recovery time just like everything other body part does.

Hit all the heads when training them. You do flat bench, incline bench and decline bench for chest to hit all the heads of chest right? So why not do the same thing for the calves to develop the entire calve. When your toes are pointed out it hits the inner head of the calves, toes pointed in hits the outer head and toes pointed straight hits the entire calve. So make sure you focus on each head to develop to entire calve. Also don't just stick to one exercise, use all the equipment to your advantage. You wouldn't do just barbell curls for biceps would you? No, you would do dumbbell curls, preacher curls and one of the many other exercises too. So don't forget to target all the different heads of the calve muscle.

Try different things when training them too, confusion is a great tool in bodybuilding. A lot of time the problem with calve development is just simply being in a training rut. So I like to add giant sets, sets to failure, sets of 50 and the ultimate calve killer, a set of 100 reps. Also, calves can be a very boring body part to train so if you add some variety in your calve workout it will take the boredom out of training them.

One thing that I feel is important is form. Those little quarter reps just don't cut it in calve training. You know those reps where people just go a quarter of the way up and just sit and bounce the weight up and down for a few reps. Make sure you get the full range of motion. Stretch all the way down at the bottom and on contraction go all the way up like a ballerina would do and squeeze the calve. Keep the reps slow and controlled, no bouncing.

Calves are a very important component in producing a complete body, not just for bodybuilding but also for anyone who is just into weight training to look good. I have found out that the ladies like good calve development. It makes the legs just look ten times better and really completes the leg development. Now my calves aren't anywhere near their potential yet but at least now I am not embarrassed by the lack of size they have. There was a time I was ashamed to where shorts because they looked like two sticks. Calves take time to grow so just train them hard and intense, just the same as you would do arms, and the growth will come. Just keep them a priority in your workout week and never neglect them and you will experience some great gains.

So don't neglect your calves. I think it just looks plain pitiful when I see some big huge freak walking around on little sticks for calves, it really makes the rest of the package look bad.

I had a perfect build to look like Arnold it is just a matter of getting there...