Actor, entrepreneur, producer, philanthropist, husband, and father - Mark Wahlberg, the star of this summer's Seth MacFarlane comedy, Ted, is greater than the sum of his parts. 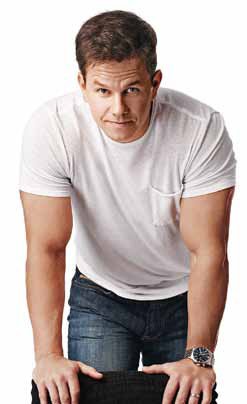 Mark Wahlberg had blood on his arm when he arrived on set in Miami for our cover shoot, and he didn't even realize it. As we were chatting prior to getting set up, I pointed to the spot on his forearm and said, "Tough scene today?" He shrugged, smiled, and grabbed a tissue to wipe away the crimson. "It's makeup," he chuckled.

I won't lie; I was a little disappointed. I'm not a sadist, but showing up to a shoot bleeding is the equivalent of finishing a race on a broken foot. On the other hand, I also wasn't surprised I believed it was real.

That's the thing about the 41-year-old actor and star of the upcoming comedy Ted (about a crude teddy bear come to life, and the brainchild of Family Guy creator Seth MacFarlane): He's believable in everything he does. Funky Bunch frontman? We bought it. Calvin Klein model? Sold. Tough guy? Definitely. Funny? For sure. Award-winning leading man? No question about it.

Whatever Mark Wahlberg does, he does well - and if you've been paying attention, he does a lot. Actor, entrepreneur, producer, philanthropist, husband, and father - there doesn't seem to be a role he can't fill with relative ease. For his MF cover story, he almost interviewed himself.

"What do you want to talk about?" Wahlberg asked when we sat down. Celebrities don't ask you that. This approach is all too rare, but it served to open a door to something different - something, perhaps, that hasn't been said for a man about whom so much has already been written. I was ecstatic to let him take the wheel and tell me what he wanted me to say about the things he thinks are important. As ever, Wahlberg didn't disappoint.

"I don't even know what cool is anymore!" The statement, totally unprompted, is indicative of a man who knows his past - and his place in the world. It's also quite telling of his actually being a lot cooler than even he thinks he is. And, truthfully, Wahlberg really is cool.

He's not Marky-Mark cool. He's not Dirk Diggler cool. He's Mark Wahlberg cool - a reflection of everything he's done and the work ethic he employs, as well as everywhere he's been and the experiences he's learned from along the way. "I can't forget where I came from," he told me, lacking any of the pretension that could be layered in such a statement.

Born in the Dorchester section of Boston, Mass., seasoned with a checkered youth that saw him split his time equally between the backseat of squad cars and secluded makeout spots with members of the opposite sex, Wahlberg had been the bad boy and played the role well. But that's not who he is right now: "I try to be as respectful as possible. My wife and little girls expect it of me," Wahlberg says.

He doesn't lament his past, but he is intensely aware of it, and it's likely the main catalyst, along with raising his four children, for his creation of the Mark Wahlberg Youth Foundation. "Too many kids have fallen through the cracks," he remarked to me with a sincerity that a presidential candidate would envy.

"I wouldn't be able to sleep at night if I had this amazing life and didn't give back." And indeed he does give back. The Mark Wahlberg Youth Foundation alone has raised more than $1 million since its inception. 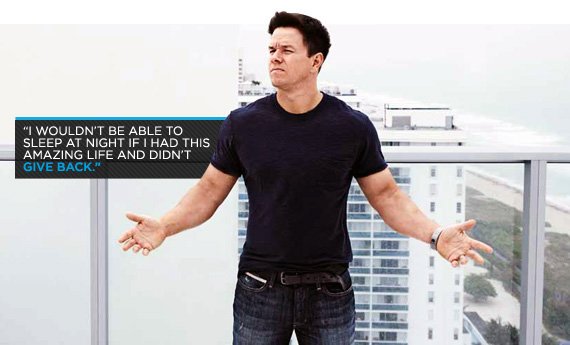 Ever dream of having your own home gym? Mark Wahlberg did, and he's living that dream with a fully stocked training area where he transforms himself into the roles he plays on the big screen. I asked him for his technique for building bigger biceps, and he was happy to oblige.

His workout varies, but this sample plan should see your sleeves getting tighter by the day.

For his role as pro boxer Micky Ward in The Fighter, he employed a heavy dose of fight training - a style he now uses to work himself into shape for every role. "There's really nothing more demanding than boxing training," he says, noting that slimming down for Ted "meant playing basketball and doing serious cardio."

Wahlberg's seamless transition from serious action roles into comedy doesn't surprise anyone these days - especially Ted's director, Seth MacFarlane. "Mark is really the only guy who could play this role," the Family Guy creator told me during a phone interview, sounding a lot like Brian Griffin.

MacFarlane went on to say that he wanted Wahlberg for the lead actor in his directorial debut because the role "required the delicacy of a comedic performance that would be funny but wouldn't take it too far into the unreal." In fact, according to MacFarlane, "Mark gives a hilarious performance that's vulnerable and real."

The tone on set was one of collaboration and good humor. MacFarlane noted that Wahlberg and Mila Kunis did "a lot of laughing together." The bottom line for MacFarlane, and studio execs, however, has to be that, as MacFarlane himself told me, "Mark made the difference between this movie sinking or swimming." 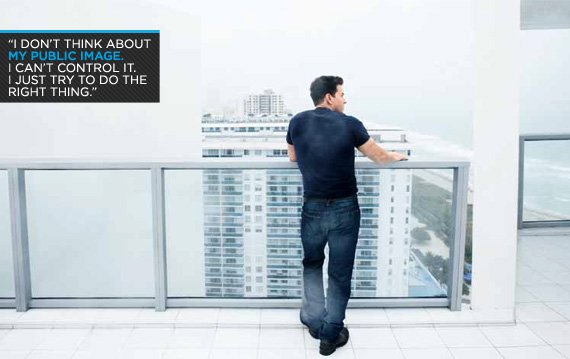 Wahlberg is very proud of the film, though he downplays his own performance in favor of simply saying that he believes "Ted will reach a much larger audience than any of my other films because it's a very creative project that will surprise a lot of people."

He also downplays the massive transformation he had to undergo for his upcoming role in Pain and Gain (about a pair of real-life Florida bodybuilders trapped in an extortion ring). "I had two months to get into shape for the role, I was pounding heavy weight, and I packed on about 40 pounds for it," Wahlberg told me, also mentioning that he crafted his own program to gain the muscle.

All told, he went from 165 pounds to a thick 205, likely his most muscular ever. He used his preparation for the role as a challenge to best his efforts in years past: "I wanted to surpass the goals I had when I was younger - right now I'm benching 335."

But he's also keenly aware that the demands on his body to maintain such size greatly increase his risk for injuries. He hopes in the future to always "stay around 180-to-185 [pounds], train regularly with athletic moves, and have no real aches and pains at all." He'll be on that path at the time you're reading this, as he's leaning down again for the upcoming film 2 Guns with Denzel Washington.

Wahlberg's ability to morph into fitting into the clothing of all these characters is as impressive as his ability to be believable in all the roles. When I said as much, he thanked me - but not in the typical Hollywood "I know I'm awesome, but I shouldn't say it, so "I'm glad you did" demeanor you'd expect. 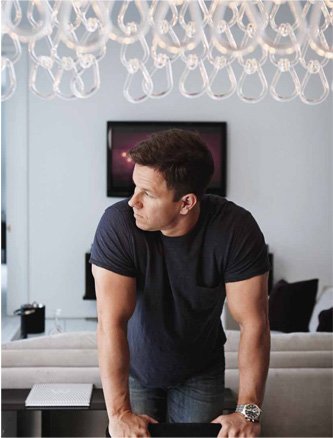 He stopped, thought for a second, and said, "I've always wanted to try to do it all. Right now, I'm shooting 12 hours per day, I go to bed early, get up at 4 a.m. to train, then I eat, take my supplements, spend some time on my lines, and get to work." He concluded the stream of consciousness simply by saying, "Hard work does pay off."

Truly a sentiment that the Mark Wahlberg many people like to talk about - the high school kid with an attitude - invoke on a routine basis because it highlights who he was.

And, indeed, you can tell his story as a dramatic turnaround, as many already have. But when you talk to Wahlberg, you can tell that the man he was certainly isn't who he is now, and that he hasn't been that kid in a very long time.

This is a seasoned, smart, savvy businessman who won't be acting for life - unless he chooses to. His evolution to becoming this powerhouse didn't happen overnight, but it's past transition now. There are no lurking skeletons in the closet or hidden secrets that will take him back to who he was.

In many ways, however, the reinvention of Mark Wahlberg and ultimately who he is today is vastly more impressive than any of his roles or anything he has done in his colorful past. "I start every day on my hands and knees in prayer," Wahlberg told me, eyeing me to see if I'd be a cynic or at all skeptical about the statement. I wasn't.

In fact, Wahlberg is clearly not playing the part of a devout Roman Catholic; it really is a big part of his life. Staying quiet, he could sense I was leaving it open for him to unpack the statement, especially in light of his youthful image and current roles where he carries more guns than rosaries.

He recounted an all-too-common story of being a kid who didn't have an option about attendance at Sunday mass, but now he openly says, "God is more important [in my life] now." He didn't preach it at all - he was just honest enough to say it, which is something many in the public eye stay away from. And maybe the Wahlberg of old, or many of his contemporaries, would sidestep being honest about something that personal, but as with anything in his life at the present time, he endeavors to be, as he told me, "as real as possible."

And that's exactly who Mark Wahlberg really is, a genuine article who has been through as much in life as he has onscreen and someone who has grown as a man and outside of the shadow of a persona.

I asked him if he had undergone any of these changes as a result of being a father. It was a soft question, but his answer was disproportionately intense. "Having daughters made me a real man," he told me with the tone of a dad who values being a protector and role model. It makes sense and seems to be a reflection of his current image in the public eye.

"I don't think about my public image," he said, almost anticipating my next question, "I can't control it. I just try to do the right thing." And he's very aware of making sure he's doing the right thing - so much so that when I was thanking him for taking the time to sit and talk (for much longer than anyone had promised - no doubt to the dismay of any handlers, producers, or the like), he asked me if there was anything else I needed to know.

It was a broad enough question that I figured I could answer with an equally broad query: "Who is the real Mark Wahlberg?" I asked. His answer didn't surprise me and had no hyperbole attached to it: "The real Mark Wahlberg is the most blessed individual ever, a devoted servant of God, humble with a huge appreciation for everything, and a hard worker."