Don't be that lifter who looks great but feels broken. Carve out space in your week to get better at these 5 poses, and your body will thank you!

If you're already hitting the weights a few times a week, you may not think you have time in your schedule for yoga. Or maybe you're that person who watches a class happening from a distance and says, "I'm definitely not flexible enough for yoga. Maybe just some stretching instead."

In both cases, the reason you say you shouldn't be doing yoga is the exact reason you should. Yoga is the perfect balance to the two-dimensional power stance most lifting happens in. It moves joints through a full range of motion, develops balance, and can almost magically improve certain pains in cranky shoulders and hips, even if you can't always tell how or why.

Put another way, it's just good movement medicine—medicine that many lifters sorely need. So where do you start? In a good class, of course. Or you can just work on incorporating the following go-to poses from Cellucor athletes Jen Jewell and Alex Silver-Fagan.

Find a way to plug them into your day—even if it's just for 5 minutes in the morning or while you're watching TV at night—and you'll be amazed at the benefits you reap.

Pigeon pose is a classic pose that Silver-Fagan frequently finds herself turning to and recommending to other people. Why? It just feels good, particularly in the hips and butt.

"The majority of weight lifters have tight hips. It comes with the territory," she explains. "In order to prep for proper range of motion and prevent injury, lengthening and strengthening the hip flexors is important." This is one you can incorporate into a dynamic warm-up, but it's also a nice pose to sink into for 2 minutes or more at night.

"Remember to flex your front foot, to protect your knee," says Silver-Fagan. "Additionally, you should be reaching your chest up and then slowly bringing your chest and hands toward the ground in front of you."

The basic version of the pose can be enough for many people, but if you want to progress it over time, you can add a backbend and lift the back leg for what is known as the "king pigeon" pose. Don't rush into this, though!

Add some variety of this pose on days after leg training, when your hip flexors and glutes are tight.

"A lifter's back takes a beating when throwing around a barbell," Silver-Fagan says. "A simple forward bend can do a lot to loosen the lower back, decompress the spine, and lengthen the entire posterior chain."

If your training includes a lot of squats or deadlifts, you're accustomed to focusing on avoiding forward bending at all costs. But even with ideal form, these movements demand plenty of your lower back. If you never take the time to decompress, you could easily become one of those lifters who looks like a Spartan but is terrified of picking a pencil up off the floor. 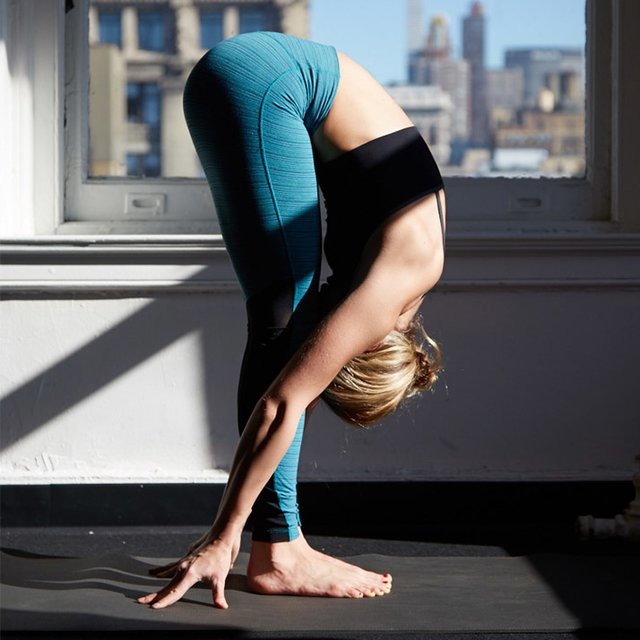 But forward bending isn't something you just want to leap into. Don't do this right after heavy lifting, when your back muscles are fatigued and your spine may be vulnerable. You want to be a little warmed up, perhaps from a few rounds of down dog to up dog (more on that soon). And of course, do it right.

"Think about pulling your tailbone up toward the sky while doing this movement and letting your body just fall heavy on top of your legs," she suggests. "To increase the stretch in the back of your legs, bend your knees slightly."

Down dog is a foundational pose in the vast majority of yoga classes, and for good reason. There's no other pose that's so approachable yet so beneficial to so many different parts of the body.

"I love this pose; it's one of my favorites all around," says Jen Jewell. "I love burpees, because they work your entire body head to toe with just your body weight. If there was a yoga equivalent of a burpee, the downward dog would be it."

Silver-Fagan echoes this praise. "This position will open the shoulders while strengthening the arms, hip flexors, and the backs of the legs," she explains. "And with the head upside down, you get a rush of blood that many people find calming to the mind."

However, there are misconceptions even about this foundational pose. One is that you have to have your heels on the floor to perform this move correctly. Not true, says Silver-Fagan. "Everyone will vary in their flexibility levels. Just make sure that your dog isn't too short. To check, roll forward into a plank, and if you don't have to move your hands or feet, you know you're set up properly."

Another misconception is that the down dog needs to be hard. It's a resting pose, meaning you should be able to hold it for 45-60 seconds relatively easily. If you can't do that, well, there's your goal.

If a minute is easy, you can progress the pose by adding in some single-leg holds, a pose that is commonly used as a transition to lunges and various warrior poses. But Jewell loves this version on its own.

"The one-leg variation really helps stretch out the legs, back, and opens the hips more," she says. "I tend to have very tight hip flexors, and this pose helps increase my flexibility there and assists me with exercises such as squats and lunges in my workout routine."

If you've done downward-facing dog, the chances are that it was followed shortly afterward by upward-facing dog, where your chest comes through your arms and you bend backward. Most yoga classes start with some variation of a "sun salutation" utilizing these poses and perhaps several of the others listed here.

The similar name of the two poses is no coincidence, because they're two sides of the same coin. One folds forward, opening the muscles of the back side of the body, while the other folds backward to open the front. A healthy spine—and a healthy athlete—should be able to comfortably go in both directions.

"This one is great for opening the chest, stretching the abdominals, and opening up the hips," notes Silver-Fagan. "Plus, it just feels amazing."

One misconception she sees for this pose is the belief that the toes must remain tucked. She advises performing it with feet untucked and the top of the feet flat on the ground. "Push through the tops of your feet to bring your thighs and knees off the ground," she says. Also, remember to lift your chest up before you bring your head back, all while keeping your hands in line with the shoulders.

Once you've got your down dog, up dog, and forward bend nailed, down, you've got enough to build a little improvised flow you can do pretty much anywhere you want.

If you've just finished an intense shoulder workout, Silver-Fagan says that dancer pose is the move to turn to. "This is an awesome move to stretch the shoulders, chest, and quads," she explains. "Additionally, it requires a lot of balance, which is important for athletes."

Can't balance during this pose? No problem; just use a wall for assistance instead.

"As you go about the dancer pose, you'll want to remember not to let your chest collapse when kicking your legs up," she explains. "It's a must to keep your torso lifted and remain open as you raise your legs slowly upward."

This pose will require some degree of flexibility, so don't get too down on yourself if you can't get into the full pose right away. Keep working at it, and as you begin to gain that flexibly, it'll come more easily.

There are many ways you could incorporate these poses into your week. If you really want to get better at yoga, there's no substitute for going to a class or two a week, either online or in person. But even just one class a week, along with some time spent practicing these poses, can be enough to give you some serious benefits.

If you're committed to fitness, it's time to stop watching yoga from afar. Get in there and start moving and feeling better!