SWAT: Only The Strong Survive

It was late July, and the lead story on all the local news stations was the record-setting heat and humidity predicted for the day. There was even a health advisory against all outdoor activity. That didn't matter.

Our unit started the day out on the range with an hour of PT (physical training) and then jumped right into some shooting drills in full gear. I was losing sweat faster than I could drink; I think I consumed a gallon of fluids before lunch. It was so bad even our team paramedic was on hand in case anyone needed to be hooked up with an IV. We had no other choice—it was our SWAT training day.

Special Weapons and Tactics (SWAT) units train in all sorts of conditions; some are highly physical, some are emotionally demanding. There's a lot of variety, to simulate real-life situations. We practice various shooting drills out on a range or in a shoot house. We also practice entries into buildings and room-clearing drills using safe weapons, or force-on-force training using "simunitions" (paintball on steroids.) Sometimes the team will use a building scheduled to be torn down as the target of a high-risk search warrant. We'll then go through the entire process of planning and executing the mission. 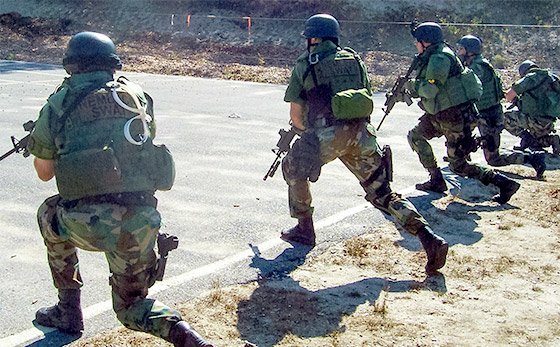 "There's a lot of variety, to simulate real-life situations. We practice various shooting drills out on a range or in a shoot house. We also practice entries into buildings and room-clearing drills using safe weapons, or force-on-force training using "simunitions" (paintball on steroids.)"

Our typical team-training day generally starts off with some calisthenics and stretching. My team likes to form a big circle with the instructor in the middle. We then go for a team run that starts out slow, with someone calling cadence, and conclude with sprints or hill runs. If we have access to a tall building, we might run the stairs. After PT we'll jump right into the day's main focus of training.

Sometimes we go through self-defense drills in full SWAT gear. This is unique training because we practice blocks and throw strikes encumbered by heavy tactical vests and ballistic helmets, all while holding a handgun or longarm. We do this because we often encounter an unarmed individual who is assaultive or noncompliant. We then need to set aside deadly force to physically deal with him.

As part of our training, we combine physical exercise with shooting drills to simulate possible real-world SWAT situations. Shooting drills are always done in full gear. Most guys are carrying about 50 pounds of equipment. Anytime we're geared up, everything is a little more laborious, but we train as we fight. During training is the time to discover and resolve any problems related to operating in our equipment. You wouldn't want to discover an operational problem during an actual mission. Even in cool weather, it doesn't take much effort before we start sweating. During the summer months we sweat so profusely that, after the day is done, we need to set our heavy vests aside so they can dry out. 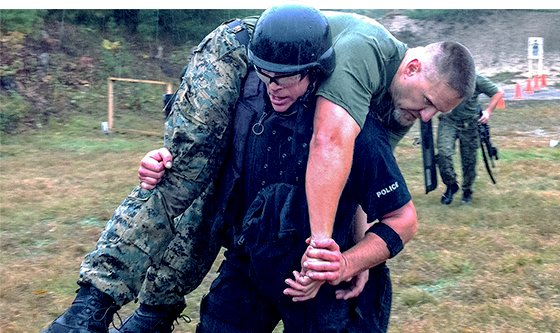 "During training is the time to discover and resolve any problems related to operating in our equipment. You wouldn't want to discover an operational problem during an actual mission."

Boys Will Be Boys

On a SWAT team full of type-A personalities, it should come as no surprise that everyone is competitive. We'll use this in some of our shooting drills by creating various competitions. We may form a line where each man is shooting up close on his own target. Anyone who misses steps out of the line. We then step back 5 yards and shoot again. We continue moving back until there's only one man standing. We might also form small relay teams where each man must complete a physical task, like a sprint and pushups, before scoring the required number of hits on a target. He then runs back and tags the next man on his relay team. The team that finishes first owns bragging rights.

When preparing for a SWAT competition, the training really intensifies. About 10 of us meet each week and concentrate on the challenging PT and shooting drills. Our PT is designed to be functional in the sense that it prepares us for what we may face on a SWAT mission. The SWAT competition events are also designed this way. We work with unbalanced loads such as sandbags, logs, heavy chains, and truck tires. We might use heavy drag dummies or carry each other in various manners. We practice climbing walls and fences of various heights.

Climbing ropes are also a great test of grip and upper-body strength. We run over uneven ground, in full gear, carrying our weapons or heavy objects. Sometimes we'll train wearing our gasmasks because it makes it more difficult to breathe, and competitions often require masks at various stages. 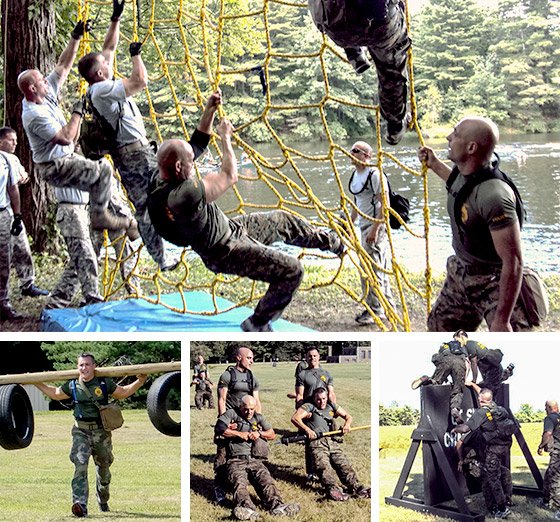 "We work with unbalanced loads such as sandbags, logs, heavy chains, and truck tires. We might use heavy drag dummies or carry each other in various manners. We practice climbing walls and fences of various heights."

Our SWAT tryout is one of the most difficult of any team I know. We hold tryouts once a year, and the entire team is involved in this important day. Every candidate is closely monitored; above all else, we're looking for any sign of weakness or quitting. If a candidate gives up during the tryout, the team can't depend on him when it really matters.

Undoubtedly, we've lost some good candidates because they fell just short on one of our standards, but we refuse to lower the bar for anyone. I recall one candidate who was just a couple of feet short of climbing to the top of the high rope. He was spent and couldn't pull himself up any further. His response to yells of encouragement was to yell back, "I can't." He had shown his true colors, and at that moment the entire team disregarded him as a viable candidate.

Our tryout consists of a series of calisthenics, a timed run, an obstacle course, and two stress-shooting courses. We generally have about a 50 percent failure rate. If a candidate fails but the team believes he has the right stuff, we encourage him to come back and try out again.

The national SWAT team standards dictate that a team must have a formal tryout process and train 16 hours per month, plus a full 40-hour week each year of advanced SWAT team training.

Unfortunately, not all SWAT teams are created equal, and not all conform to these standards. Special Ops teams like the Navy SEALs are elite for good reason; likewise, I believe a SWAT patch should be earned and not just handed out like they would in some good ol' boy network. There are still teams out there with no real tryout process or physical standards, and this creates a recipe for disaster. 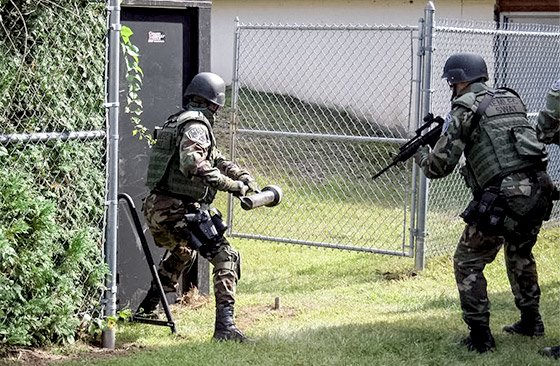 "It's essential that SWAT operators possess a combination of strength, speed, and agility. We carry a lot of extra weight and may be called upon to run down the block, climb over a fence, ascend three flights of stairs, ram a door, and then possibly make a precision shot."

It's imperative that SWAT operators maintain a high level of physical fitness. It's essential they possess a combination of strength, speed, and agility. We carry a lot of extra weight and may be called upon to run down the block, climb over a fence, ascend three flights of stairs, ram a door, and then possibly make a precision shot. Such men also need the endurance to maintain a high level of combat readiness during extended missions. We've been on missions with seemingly no end, including a 20-hour saga in Watertown, Massachusetts, in the aftermath of the Boston Marathon bombings.

In law enforcement, controlling your firearm—not to mention a fleeing suspect—requires exceptional grip strength. Here's why you need it and how to build it.